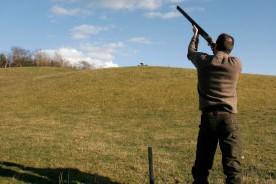 Your wingshooting's not up to snuff? Try taking a shot at sporting clays. Here's what you need to know

Birds may not be in season, but summer is the ideal time for hunters to hone their wingshooting skills. And I can think of few better ways to do just that than by spending some time at the sporting clays range.

Unlike trap and skeet, where the targets are consistent and predictable, sporting clays replicate the broad range of shooting situations encountered while hunting, with targets presented at different angles, speeds and distances.

Often described as “playing golf with a shotgun,” the game of sporting clays typically features a series of five to 20 shooting stations—with 10 as the norm—along a fixed course. Each station is designed to take advantage of the natural terrain and vegetation, with clay targets launched in either “true,” “following” or “report” pairs.

With a true pair, both targets are launched at the same time; with a following pair, the second target is launched immediately after the first; and with a report pair, the second clay is released at the sound of the gun firing at the first target. Shooters are allowed to take up to two shots at each pair—if they miss the first clay, they can either stay on it for another shot or swing over to the second target. Two to five identical pairs of targets are launched before the shooter moves on to the next station.

The most common clay target is the same as those in trap or skeet, but there are also two smaller versions (midi and mini), as well as what are known as battues and rabbit targets. Battues are thin clays that fly flat off the launcher, then roll in mid-air to present their full face to the shooter. Rabbit targets are hard clays that bounce unpredictably along the ground. At any given station, a shooter may face any combination of these different targets.

To ensure safety, you shoot from a set location at each station, typically delineated by a wooden or metal frame. Adding to the challenge—and to the fun—natural features such as hills, trees and ponds are also brought into play to further define the window of opportunity for hitting the target.

The targets are released when the shooter calls “pull,” but be warned that there’s virtually no such thing as a typical presentation. Targets can fly toward you, away from you, straight in from either side and at every possible angle. For example, a pair might include a fast-flying crossing shot followed by a bouncing rabbit, or a couple of midis launched from opposite directions crossing directly in front of you. The score is kept by keeping track of hits and misses, with one point for every hit.

So, how to get started? These days, there are established sporting clays facilities across the country—simply find one near your home, round up a few buddies and give it a try. Course operators are always eager to introduce newcomers to the game, and they’ll typically walk around the course with you the first time, offering helpful advice.

Designed for hunters by hunters, the game of sporting clays is generally not as competitive or as intimidating for novices as trap and skeet. Instead, it’s meant as a fun way for shooters of all levels to enjoy themselves and hone their skills. Indeed, sporting clays can humble any shooter, and being able to share a laugh with your friends is all part of the game.

As with golf, the real competition is with yourself as you attempt to improve on your previous scores. Best of all, you’ll quickly find that the game does wonders for sharpening your shooting fundamentals-and making you a better wingshooter in the process.

For sporting clays, #7 1/2 or #8 shot target loads are standard fare. Rules prevent you from using larger shot sizes. Over/unders and side-by-sides are most commonly used by experienced sporting clays shooters, though auto-loaders and pumps will easily do the trick. As you’ll be taking two shots in quick succession at each station, single-shot guns are impractical.