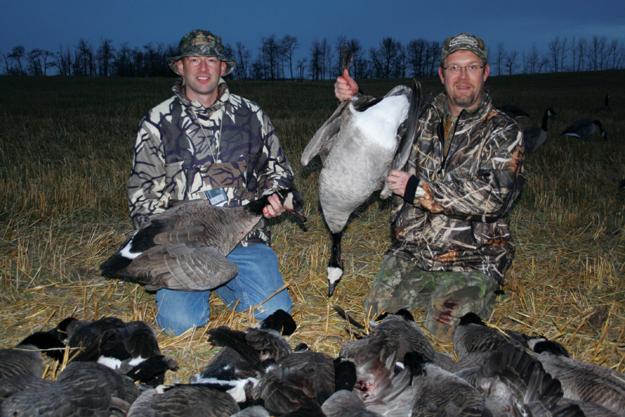 A pair of big Canada geese appeared over the treeline on the edge of the field and immediately set their wings to drop into our decoys. Their deep, raspy honks quickly got us excited as they soared, without hesitation, straight into our set-up. With five shooters waiting in well-concealed blinds, the birds weren’t given a chance to leave.

The rest of the hunt was just as magical. More than 40 flights of geese came to the field and they all decoyed as though they were on a string being pulled to the centre of our spread. It was one of the best goose hunts I’ve ever been on, and perhaps best of all, we didn’t have to get up early to enjoy it. Instead, we had set up in the late afternoon and hunted into the evening.

Traditionally, morning hunts have always been a favourite. Plus, some jurisdictions don’t allow goose hunting after 12 p.m., so the idea of giving geese a break after midday is deeply entrenched among some waterfowlers. But where it’s permitted, there’s nothing wrong with going after geese later in the day. In fact, it can be extremely productive, with the birds much more willing to decoy. You just need to pay attention to a few key details.

In the morning, geese are eager to get out and have breakfast, and they seem more excited, often appearing in large waves. Yet they’re also nervous in the early hours, since that’s when they see the most intense hunting pressure. In the evening, on the other hand, the birds seem much more relaxed, with their flights more spaced out.

Sure, you’ll find fewer birds lined up in the sky than in the morning, but this works to your advantage. Having single flights come into your field, without three or four flocks stacked up right behind them, means you won’t be flaring nearly as many birds once the shooting starts.

Spot evening hunts the same basic way as you would scout for a morning shoot: find the geese on their favourite roost or staging water, then follow them to the fields to pinpoint where they’re landing and feeding. This is a standard approach for any waterfowl hunt on agricultural land.

For an evening hunt, I like to spot late in the day, watch the birds again in the morning, then plan my set-up. This works great and occasionally leads to both morning and evening hunts on consecutive days.

Remember, when geese concentrate in the centre of a field, you know there’s plenty of feed to hold them. When the birds start to push up against the edges and hug fencelines, however, it means the food has been depleted and they may soon head elsewhere.

In the evening, geese just seem more relaxed, and they take their time coming off the water. Their casual approach should be mimicked in your decoy spread by spacing it out and giving the birds more room than you typically would.

One of the biggest mistakes, especially when hunting big honkers, is to make the landing zone too tight. The average goose has a six-foot wingspan, so for just 10 birds to land, you need at least 60 feet of space so they don’t run into one another. I’ve seen geese appear to flare off decoy spreads, but they were actually circling to find more room to land. Open up the decoys, and in typical goose fashion the birds will try to land in the centre of the big opening.

If you haven’t started using at least a few full-bodied decoys, it’s time to make the investment. Place these more lifelike decoys on the leading edge of your spread to help convince incoming geese their buddies are already on the ground. Since the decoys on the leading edge are the ones that incoming birds see first and focus on, having them look as realistic as possible is just smart. For the entire spread, I recommend a minimum of four dozen decoys; I prefer six to eight dozen. This gives incoming birds more confidence, making them more likely to land.

Goose flagging can also be effective when there’s good light in the evening; geese pick up the movement of a flag quickly. The illusion of other geese landing will often provide incoming birds with the confidence to come straight in.

As for blinds, layout blinds with natural vegetation tucked into the covers work great. If the geese have been hunted hard, they’ll look for the dark outlines of the blinds and stay away if they spot something. If you’re concerned they’ll see your layout blinds, try going back to the old stand-up blinds instead—because geese rarely see them anymore, they may work even better than before.

During a full moon, geese will often be out long after sunset. The evening feed may be their biggest of the day, and when the moon provides enough light to feed after sunset, they will. That’s why hunting on the morning after a full moon can be frustrating—many of the birds simply don’t appear because they stayed out late the night before gorging themselves. So when the moon is bright, make sure you hunt until the end of legal light. I’ve been amazed at how late in the evening they’ll actually show up to feed.

When there’s a new moon, you want to be in your field by mid-afternoon. Without that bright moonlight, the geese will fly earlier and head back to water before complete darkness. These birds are still more relaxed than they are in the mornings; they simply bump their feeding time up by an hour or two.

When the weather is beautiful and the sun is shining, the geese will fly and feed all evening, prolonging your shooting opportunities. The sun never seems to be as glaring in the evening, and the long shadows of fall help you blend into your surroundings more naturally. You also don’t have to worry about getting cold and watching your decoys frost up, which sometimes happens on early-morning hunts.

That said, when the weather turns nasty with rain or snow, I’m still in the field by early afternoon. Why? Cold, miserable weather triggers the geese to consume more calories. It’s not uncommon to have birds fly all afternoon, making sure they get their fill in case conditions worsen even more.

Aside from the amazing shooting opportunities, there are other benefits for hunting afternoons and evenings. If you have a hunting buddy or a budding teenaged wingshooter who just isn’t a morning person, for example, evening hunts are just the ticket to spend more time in the field with them. And for many hunters, it’s just easier to sneak out of work early than to be conspicuously absent first thing in the morning.

I know avid waterfowlers think about these things, since this time of year their minds are completely preoccupied with figuring out ways to get back afield as soon as they can. Just watch the weather and the lunar phases, and you’re likely to have the best gunning of the year.

And yes, you’ll be able to sleep in a bit, too.