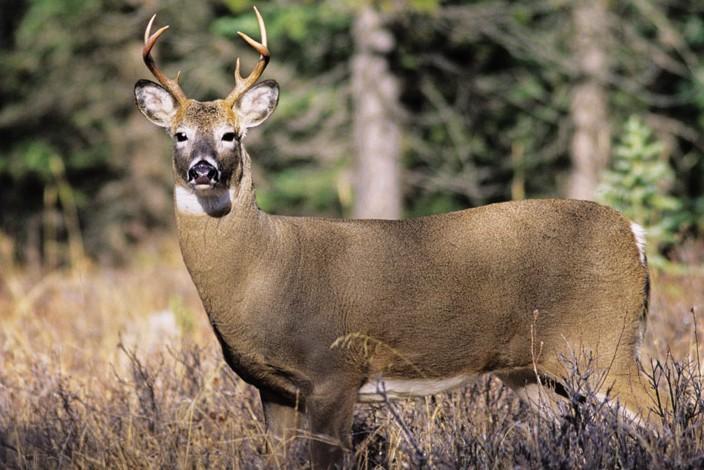 Though we generally think of B.C. as a bastion of mule deer, wildlife biologists estimate that the province is also home to well over 65,000 white-tailed deer. While some of the animals are found in the northeastern Peace River area, most are spread out through the Kootenays and Okanagan region. Far from a needle-in-a-haystack situation, whitetails actually outnumber mulies in certain areas, provided you find the right habitat. In the Okanagan region along the U.S. border, where I do most of my deer hunting, that means working the cut blocks and young, second-growth forests at lower altitudes, as well as river-bottom farm fields, especially those adjacent to forest. (Fields with little nearby cover are favoured by mule deer, as are the higher-altitude cut blocks.)

Early and late in the day through most of October, an effective strategy is to watch the field edges and work the smaller cut blocks. During November when the bucks go into rut, posting on the upgrade side of a cut block is highly effective, provided you put in the hours. Racked bucks in search of does are on the move at all hours of the day at this time, although the first and last hours of legal shooting light tend to be most productive (as is the case throughout whitetail country). The farmlands close to the roads are, of course, privately owned and access is not always granted. That’s not a huge problem, however, because there are large tracts of crown land beyond the agricultural zone. There you can find an intricate network of lumber roads providing access to countless cut blocks. Sold through government agents within the district, inexpensive forest recreation maps are essential if you don’t want to get lost in this backcountry maze. Remember, while many of these dirt roads are fairly easy to traverse, even with 2WD pickups, they can get rough at times. Non-residents are required to hunt with a guide, although you can cajole a friend or relative living in B.C. into getting a permit to hunt with you, thereby sidestepping the guide/outfitter requirement. On the whole, this is civilized hunting with mild temperatures through most of October and only rare bouts of frigid weather in November. In terms of firepower, the majority of the shots will be within 200 yards, except during the November rut, when longer shots are sometimes called for.