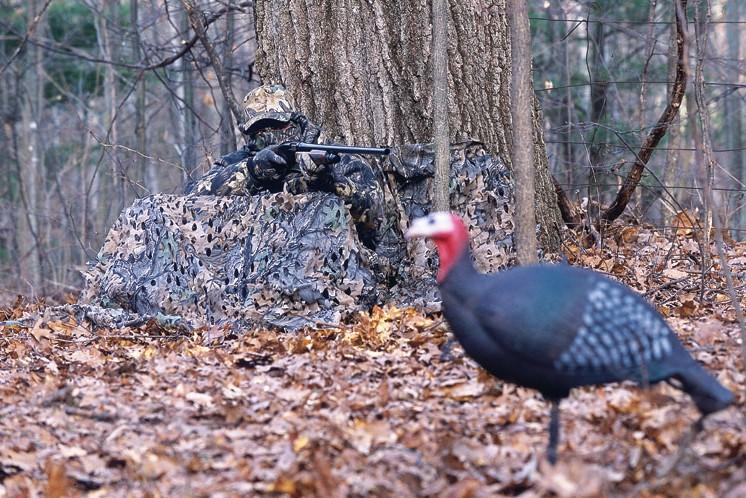 How to hunt quiet turkeys

Gobblers aren't gobbling? You can still have a succesful hunt with these tips

Nothing gets the adrenalin flowing like hearing a big tom turn himself inside out gobbling to your calls. As they say, once you get a gobble, you’ve got a turkey hunt. But when it seems as though every tom in the woods has his beak tied in a knot, you’ve got a turkey-hunt challenge instead.

Not that you can always call in a gobbling tom.

Some noisy gobblers will never leave their strut zones to investigate your calls-they expect every hen to come to them instead. On the other hand, half the toms I’ve called in over the years came in silently, not giving me a clue as to their presence until I saw their neon jelly heads bobbing through the woods.

So, when you’re getting the silent treatment, don’t give up. In fact, you’ve got two options: you can try to locate toms by using shock calls to jump-start them into gobbling, or you can set up and wait patiently in a place where you know turkeys hang out. Whatever the case, tough it out and you can still harvest a shut-mouthed gobbler.

If you have access to several farms and woodlots, or the property you hunt is at least 1,000 acres, this is the time to use shock calls-simply drive or walk from spot to spot until you hit a bird willing to gobble. And when that happens, it’s time to set up. This tactic works best late in the morning and in the afternoon, when the hens are resting or on their nests, and not interested in toms.

The key here is that even though toms may have gone into silent mode, they can still be shocked into gobbling-if there’s a tom nearby and you use a loud locator call, chances are he’ll respond. This knee-jerk response is triggered by the volume and pitch of the call, with a shrill sound most likely to trigger a gobble. Coyote, elk, goose and peacock calls will usually jump-start a gobbler when lower-pitched owl or crow calls won’t. Be sure that your call is not drawn out too long. A loud, short burst is best so you don’t drown out the reply, which can be instantaneous.

The good thing about locator calls is they generally won’t give away your presence. Long beards will answer, then promptly forget about it after a quick look around. This lets you move slowly and quietly through your hunting area, calling every few hundred yards or so. Always remain alert, peeking over ridges and around corners in the trail. If you spot turkeys without bumping them, you can set up and immediately call with soft clucks and purrs.

Gobble calls, as well as excited cutting and yelping, can also shock a tom into gobbling. Among the friction calls, a loud box call or a high-pitched pot call is best. The most effective mouth calls for this tactic are tube calls, as they have the greatest volume. Whether you use yelps or gobbles to locate a turkey, first find a good spot and set up-if you do get a gobble, you could have a hot tom tripping over his beard to get to you in two shakes of hen’s tail.

Keep in mind that while a gobble call can incite a boss tom to come storming in to check out the intruder, it can also drive away a gobbler that doesn’t want a confrontation. As for making a short string of loud cutts and yelps that elicits a single gobble, get ready-lonely young toms often gobble just once before sprinting toward the feathered beauty they think called. A single gobble followed by silence can also mean a cautious tom is coming in, even though he won’t gobble again.

If the shock gobble came from within a few hundred yards of your set-up, allow the bird at least 40 minutes to reach you. Call sparingly with quiet clucks and purrs to reassure him; when turkeys are in quiet mode, a lot of yelping can work against you, making them suspicious. If the shock gobble was more distant, close the gap to about half and set up again to call quietly. While moving toward the gobbler, use whatever terrain or cover is available to stay hidden-either your tom or another bird could already be on its way to find you.

Do the gobblers in your neck of the woods have lockjaw? There are various reasons why toms sometimes decide to go silent. Here are some of the more common causes:

If you can’t run and gun because your hunting area is too small-and your calls are already getting the silent treatment-it’s time to hunt toms by sign rather than by sound. You should actually begin quietly scouting not more than a couple of weeks before the season starts, and again during the season itself, to pattern the birds. Find out where they roost, where they feed after flying down, where the hens nest and where the gobblers strut. Found near hen feeding areas or nesting cover, strut zones are usually high, flat openings offering good visibility so the toms can put on a show for the ladies. Set up between the roosting and feeding areas early in the morning and late in the afternoon; in the middle of the day, set up near nesting areas or strut zones.

In dry weather, look for dusting sites, places where hens and toms alike come for dust baths. A dusting site with tom breast feathers scattered about can be a hot place to set up (tom breast feathers are shiny bronze with a black tip, while hen feathers are dull with a light brown tip). You can pattern turkey activity around a dust bowl by wiping out any existing tracks and returning several times a day to look for new ones. When you know birds are in the area, wait them out with soft clucks and purrs rather than loud yelps-softer calling is best when you don’t hear voluntary turkey talk.

A silent tom is more challenging to harvest because you’re never sure what direction he’ll be coming from, preventing you from adjusting your position to get ready to shoot, as you can with a gobbling bird. And since a quiet tom can come in like a ghost from any angle and from outside your line of vision, you must have a good, well-concealed set-up. A large spruce or pine tree with low-hanging branches, for example, can make a great hideout.

Carry a pair of pruning shears to clear branches and foliage from your shooting lanes, then use the cuttings to construct a blind in front of you. This will help break up your outline and conceal any slight movements once a hyper-wary bird is closing in. Pop-up blinds also work well to hide your movement, and they don’t spook turkeys. And take the time to make your set-up comfortable-use a low seat with a backrest-so you don’t fidget during the long hours of waiting. Otherwise, a tom could pick off your movements and scram. You may hear his alarm putt, but by then it will be too late.

Even if he’s not calling, an approaching tom makes subtle noises that can tip you off. In dry conditions, for example, you may hear his feet on the leaves, or his wing tips dragging if he’s in strut. Or he might stretch his wings with a few flaps, cluck softly or use his close-range call-the spit and drum-which you should be able to hear before he’s in range. (The spit and drum sounds like someone spitting, followed immediately by a low hum, like a June bug in a coffee can.)

The sooner you detect an approaching gobbler, the better. That way, you’re less likely to spook him with any movement or sound-a wary tom can see you think and hear you blink. If a turkey does come in and start taking you apart with its eyes, trying to figure you out, wait until it begins moving away and its line of vision is blocked before swinging your gun on it. If the bird remains in full view, however, move your gun into position with glacial slowness and shoot as soon as you have the neck covered.

Boisterous gobbling-and lots of it-is the sweetest symphony in the spring turkey woods. But if the members of the orchestra aren’t in the mood to play, and you can’t tempt a single note out of them with your own turkey rhapsody, switch to a quieter melody. Give a few quiet calls, lean back in your comfy, well-chosen set-up, keep a watchful eye and enjoy the poultry in motion.