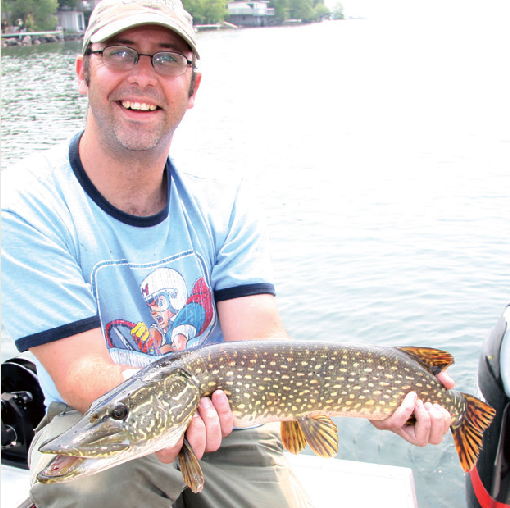 Conquer the current with these pike presentation tips

Early-season pike anglers must often contend with high water from spring showers and snowmelt, which strongly influences where the fish position themselves in large rivers such as the St. Lawrence, Ottawa, French and Winnipeg.

When the current is excessive, pike will relocate to the calmer slack areas and back eddies adjacent to, but not directly in, the full force of the flow. They will also relocate to deeper water and pull in tighter to shore—especially if there’s plenty of flooded cover—to avoid fighting the current.

So, while you may not find the fish in their normal locations because of the heavy flow, they won’t be far away. The secret is to find new areas that are similar to the normal pike-holding locations in terms of structure and cover, but without the current.

Since the big toothy predators will be tightly confined and in ambush mode, fast-falling vertical presentations typically produce more and bigger fish. That’s the reason I favour heavy 3/4- to one-ounce bass-style flipping jigs tipped with large Uncle Josh pork frogs, or fat, five-inch Water Wolf tubes with one-ounce jig heads. And I fish those baits with the same seven-foot to 7′ 6″ medium-heavy and heavy-action pitching rods and baitcasting reels I use for largemouth bass. The only difference is I spool them with 30- to 40-pound Sufix 832 Advanced Superline and add a 30-pound-test Maxima Ultragreen leader.

Accuracy is far more important than distance, so pitch your jig into or beside any flooded cover and let it fall unencumbered to the bottom. Engage your reel, pump your bait up and down once or twice, then pitch it into another pocket if you don’t get bit. Think of it as flipping for a different kind of largemouth, with bigger and sharper teeth.