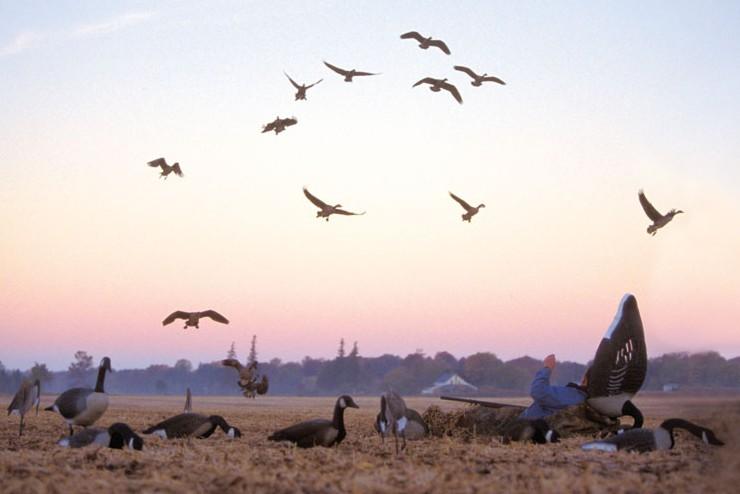 To find the best ways to limit out on Canada geese, we asked of the country's top hunters to share their tips

It’s been tough hunting. With the season now several weeks old, the local geese have grown shy of decoys and calls, and the northern flights are overdue. Now it’s day’s end, and the hunters have gathered at their cabin, just as they have on many Saturdays for many seasons, to talk about the fields they hunted and the tricks they dug up to take their limit. Tomorrow is a no-hunting day in their neck of the woods, so there’s no need to rise long before the sun does. As the night wears on, the talk grows more animated and the hunters delve deeper into their passion for hunting Canada geese.

And so it goes in hunt camps across the land each fall. Now imagine if the hunters in question were among the country’s top Canada goose experts. What would they discuss? What secrets would they share? To find out, we gathered the collective wisdom of five of the best goose hunters out there. Think of it as a virtual hunt-camp round table—and you’re invited.

Set-ups: Get in close

After almost a quarter century of guiding for Canada geese in the fields of P.E.I., Dave McLellan of Dave’s Hunting and Fishing makes no bones about it—to him, the most important goose-hunting skill to know is how to choose the right location to set up in.

As a starting point, McLellan uses the birds’ roosting area, generally an estuary or larger body of water where the geese gather to rest and preen through the night, as well as between feedings during the day. Wind direction determines where the geese will come from, since they prefer to rest in areas where they’re sheltered from the wind.

The next step is to find the feeding areas. “Geese favour fields that have good visibility on all sides to prevent predators from sneaking up on them,” says McLellan. “They generally don’t have tall trees around them and almost always there’s a bit of a knoll. Good fields are ones the birds can land in and take off from easily.”

Once he establishes where the geese go to feed, McLellan looks for a good spot to intercept them close to the roosting area—so close that the geese will see his decoys as soon as they come off the water. In some cases, his set up may be in a feeding field, but other times he puts himself in the flight corridor between the roosting and feeding areas. “If the decoys look good and you know how to call,” says McLellan, “the geese will almost always come in for a look.”

When waterfowl guide Paul Conchâtre scouts for Canada geese in the rolling Interlake country of central Manitoba, he doesn’t just want to know where the birds are feeding-he also wants to know how they’re feeding. “You’ve got to figure out why the geese are scattered around a field in a particular way,” says Conchâtre, owner and operator of Birdtail Waterfowl Service. “We hunt mostly grain fields, so we often see them lined up along the old swath rows where the most grain has been dropped. So if you go out and put your decoys in a big circle, the birds get suspicious because it isn’t what they’re used to seeing.”

Instead, Conchâtre splits his decoys into two blocks of eight or nine family groups. For morning hunts, each family group includes one or two lookers, and four to six feeders. Then in the afternoon, he uses a mix of lookers, feeders and sleepers. For both scenarios, each block of families includes 40 to 72 decoys, or 80 to 144 in total.

When setting up the decoys, Conchâtre leaves a 25-yard-wide runway between the two main blocks. He then positions four sentry birds and three or four feeders to act as blockers 70 yards off the upwind side of the runway. “Geese usually want to stop short of another bird rather than put down the landing gear two feet over its head,” he explains. “That’s the wall.”

Since the blockers and the birds along the runway are the first decoys incoming birds see, Conchâtre uses flocked-head, full-body decoys for added realism. “Some guys think we’re out of our minds when they see how much detail we go to,” he says. “But it’s those details that get you your limit.”

Dave Roy of St. Lawrence Outfitters hunts the corn belt of eastern Ontario, working the same population of non-migratory Canadas between September and season’s end in early January. To keep bagging birds throughout that time, he shifts his cover tactics accordingly to match the changing landscape.

“Early in the season, I try to use ditches and fencelines,” explains Roy. “Hedgerows provide the best cover in September and October because the foliage is still on and the birds aren’t spooked yet. Plus, you avoid teaching them to recognize blinds right away.”

Standing corn also provides excellent cover right through to November. When you can find a field that has standing corn abutting cut corn, Roy says, it becomes your best blind possible. “It’s actually the only cover they’ll come very close to,” he says. “You can put your decoys about 30 feet out from the edge.”

Once the foliage starts to drop in mid-October, the geese avoid these natural areas. That’s when Roy turns to a lay-down blind, placing it in the centre of a big, X-shaped spread of decoys. He also places the bulk of his decoys toward the centre of the set-up. “I’m trying to hide the blind in a bunch of decoys,” he explains, adding that the X shape leaves four pockets for the birds to land in, depending on wind direction.

Over the years, Jim Prince has hunted eastern Saskatchewan’s pothole country as a guide and outfitter and, more so lately, for his own enjoyment. Calling is the focus of his hunting, not just for the sheer music of it, but also to bring in the birds. “If you’ve set up within 10 feet of where the geese took off the evening before, they’ll come in even if you don’t call,” says Prince. “But if you’re just a little ways off the mark, calling is the thing that’ll save you.”

When Prince first sees birds, he long-calls to get their attention. “Once they swing our way, we throw all we’ve got at them,” he says. “At about 100 yards, we start doing clucks, double-clucks and gravels to talk them the rest of the way in.”

As he’s talking to the flock, Prince watches the reactions of the lead bird. “If the lead bird is calling, I’ll call. If it’s not, I won’t. I might cluck a little bit, but I won’t get aggressive. That lead bird is going to make the decision as to whether the rest of them come in or flare off. Watch its head. If it throws it back, they’re out of there.”

Aside from the long call, the clucks, gravels and feeding chuckles are among the most important calls to master, says Prince, noting that a proficient caller can sound like a half-dozen birds by constantly varying the pitch and tempo. While instructional tapes, CDs and DVDs are useful, he says, the best way to learn how to call is to observe birds in their natural habitat. “In the spring, I used to take the call down to the slough and try to understand what the geese are saying to each other,” says Prince, “and then try to imitate them.”

For two decades, Dave Wei has been hunting Canadas at the edges of Greater Vancouver’s urban sprawl, where the population of resident geese has mushroomed to more than 15,000. And thanks to the proximity of extensive no-shoot areas, these birds enjoy abundant refuge.

With that in mind, Wei’s goal is to maximize every opportunity by bringing the birds in as close as possible and shooting efficiently. That means not only making every shot count, but also taking the maximum number of geese out of each decoying flock. After all, one or two flocks may well be all that come close enough for a shot.

Most casual hunters tend to pick out the most likely target—a bird close enough and in the right position. If they connect, they start to scan for the next available target. “That strategy pretty well determines that you’ll drop only one bird, two if you get lucky,” observes Wei. Instead, he uses a three-shot strategy that, when things work out, translates into three geese on the ground.

Basically, Wei picks out a low bird at the outer edge of his range, a second bird closer in and usually higher up and, ideally, a third bird overhead. In a perfect world, the three targets are in a line so that the jump of the shotgun muzzle pulls the bead up onto the second and third targets. True, the geese aren’t always cooperative, but once the shooter gets into the habit of setting up the three-shot strategy, Wei says, the success ratio improves noticeably.