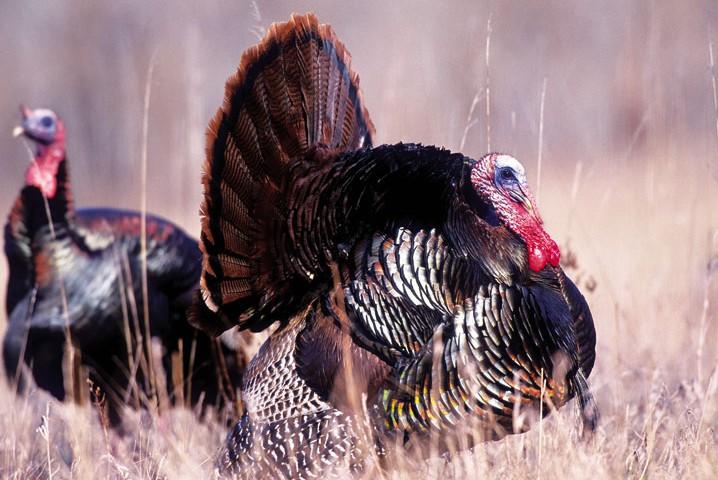 How to lure lusty toms away from their lady loves

Turkey hunting is an addiction to the pursuit of the difficult—next to white-tailed bucks, these are about the wariest creatures in the northern woods. Sure, a tom’s springtime lust for hens can dull his razor-sharp survival instincts, but it can also serve to keep him out of gun range. Consider: In the early days of wild turkey restoration in Canada, a tom had to walk for miles in order to meet a mate, filling the woods with his boastful gobbles. These days, though, turkey populations are so high he’s more than likely to wake up with hens roosting nearby. And that’s where the trouble starts for the spring turkey hunter—although a tom may gobble to every call, he simply won’t leave the lady birds he’s with.

Unless, of course, you find a way to convince him otherwise.

If you know where a tom roosts, set up within 50 metres of his location while it’s still dark. If you also know where the hens roost, set up between them and the tom. Otherwise, use the utmost stealth to get in as tight to the gobbler as you dare. A tom will wake up eager for hens, often flying down to the first one he sees or hears on the ground near him. You want to be that hen. Start with a soft tree yelp when he gobbles on roost. Then flap your hat or a fake wing to simulate the sound of a hen flying down, and make some clucks and purrs when it gets light enough to shoot. The idea is to get the tom to come to you right away, before a real hen intercepts him.

If you scare the birds off their roost when trying to set up close, don’t give up. It could work in your favour, especially if you’ve frightened away competing hens—at least now you’ll have the tom to yourself. If you’ve scared off the tom, on the other hand, that could also help by separating him from any hens roosting nearby. Since the tom may not know what caused the disruption, follow him quietly for 200 yards or so and set up. After 30 minutes, or when you hear a gobble, begin calling softly like a nervous hen. By then, the tom should be within earshot and settled enough to start looking for hens. A word of warning: scattering birds intentionally to separate toms from hens is an aggressive tactic that will create pressured birds, or quickly burn out an area. I therefore don’t recommend it, but if it happens accidentally, at least you can try to make the best of it.

If you get snubbed at the roosting site and see that more than one tom walks off with the ladies, a good passive strategy is to stay put and continue to call periodically. A subordinate tom that gets tired of watching the boss tom have all the fun with the gals may sneak back to check out the lonely lady at the roosting site—you.

If hens are leading your gobbler away from the roost area, or any other set-up, follow them at a distance so that you remain unseen, occasionally clucking and purring to cover any noises you may make. Eventually, the hens may leave the gobbler to go to their nests to rest or lay eggs; when that happens, you’ll be close enough to call to the lonely long beard. This aggressive tactic could result in bumping birds and educating them to your calls, but it may be worth it if time is running out on your hunt.

When hens hit the ground in the morning, the first thing they want to do is eat. If left undisturbed, they’ll usually follow the same route to a field or clearing. The toms will trail behind, stopping to strut and display, then run to catch up. Once you figure out the route, just wait at a good ambush site or near the feeding area itself. To avoid getting busted, don’t call when the birds are in plain sight—if they look over and don’t see a hen, they’ll get nervous. And be sure to wear the proper camo and sit as still as a stone so the hens don’t spook as they bring the trailing tom into range.

Hens are social creatures, and they’re often curious about other hens in the area. Start calling with soft clucks and purrs, rather than yelping. This can appeal to the turkey’s social nature, and a nosey hen just might lead her gobbler right to you. Small flocks of jakes and subordinate toms may also quietly sneak in, hoping for a chance to breed one of the boss tom’s unattended hens. Yelping, on the other hand, is a mating call; it may cause a competing hen to move away—taking the tom with her. So be patient. Turkeys have no schedules, and they’ll investigate calls when they get around to it.

If you don’t get results after an hour of quiet calls, try some excited cutting and yelping. Hens have a social pecking order and the dominant hen will take this as a challenge to her position. If a hen yelps or cutts in response to your calls, match her note for note with as much intensity as you can muster. This may incite her to race in with her neck out ramrod straight to settle the matter—and following right along will be any long beard that may have been with her.

Toms live most of the year in bachelor groups and communicate through yelps, clucks and purrs, just as hens do. Early in the season, right after the flocks break up, lonely, subordinate toms looking for company may respond to tom yelps. Boss toms, meanwhile, may be spurred on by tom yelps or fighting purrs to actually leave their hens and stride in, tripping over their beards, to show who’s boss. Tom yelping is safer than gobble calls because it doesn’t attract unwanted attention from other hunters. The yelps—three or four in succession—should be lower in tone, and slower and more drawn out than a hen’s yelps. A multireed mouth call with a bit of a rasp, or a glass pot call with a wooden striker, can produce good gobbler yelps.

It’s not uncommon to call in a nosey hen from one direction and a tom from another—many a frustrated hunter has worked a cautious gobbler almost into range, only to have him intercepted by a curious hen. Unless your name is Cupid, seeing them walk off together, just out of range, is a real heartbreaker. So don’t be a dating service. If a hen shows up, try to scare her back in the direction she came from. That way, she won’t meet up with any tom coming in from another direction. Simply wave your arms to spook her (if there’s no tom present, of course). To cover her alarm putts, be at the ready to make some cutts and yelps with a mouth call.

During the last 10 days of the season, or sooner if there’s an early spring, the hens will begin to incubate their eggs, dumping their boyfriends to spend most of their time feeding and sitting on their nests. The toms, which once had all the gals they wanted at the drop of a wing tip, will now go looking for love in the wrong place—your set-up. Late season toms may not gobble as much, but they’re still interested in hens and they’ll come in to calls. Use clucks and purrs to make your set-up sound more realistic (since the hens are no longer mating, there will be little or no yelping). If you don’t have a gobbling tom to work, set up and call near strut zones and feeding areas. Without those pesky hens getting in the way, this is the best time to go one-on-one with a beard-swinging tom.

How do you know if tom-stealing hens are horning in on your hunt? Consider the following frustrating scenarios.