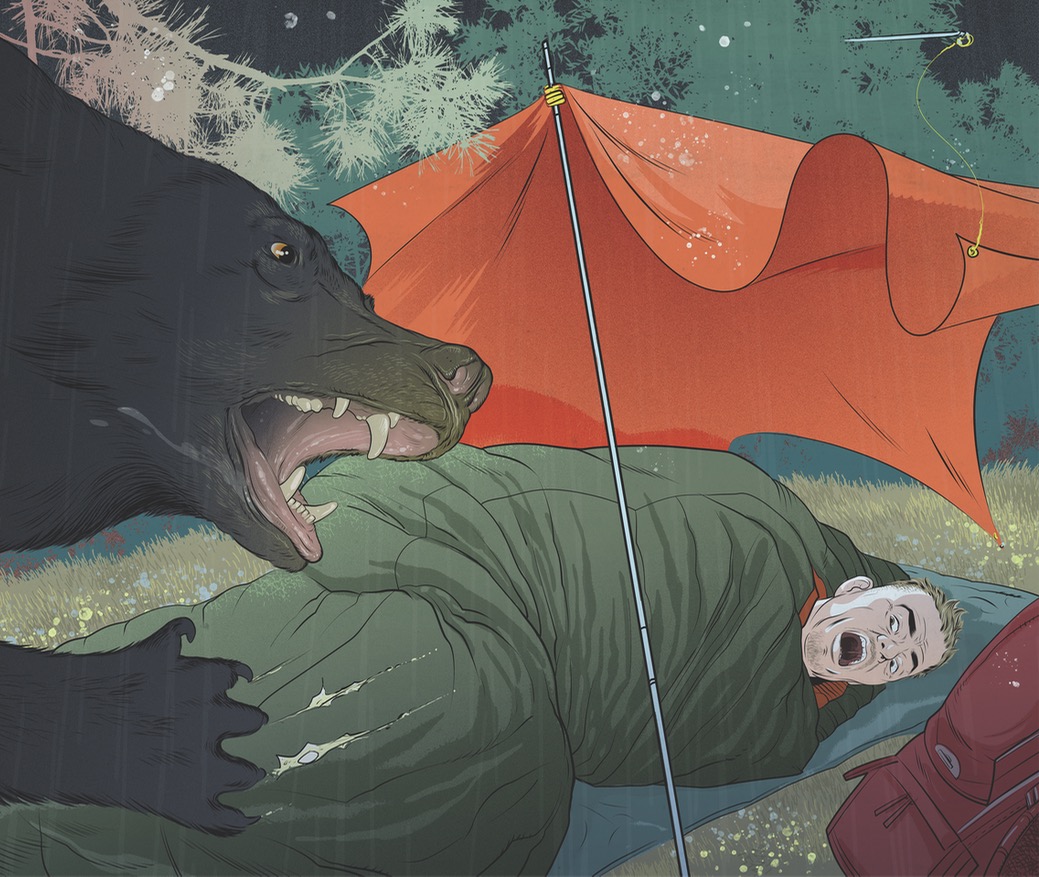 It isn’t until 9 p.m. that Micah arrives at camp. I awake and talk to him, but I’m still too cold to actually get out of my tent and socialize. While he sets up his tarp and bivy sack next to my tent, I explain that I got soaked and need to stay warm. Micah’s parents are mountain guides, and they taught him a lot about backcountry safety. That makes him a good guy to have in camp, as he usually reminds everyone to keep safe in one way or another. So, when he asks me where I hung my food supplies, I know I’m going to be in trouble—rather than hang my food along with the venison in the tree, I brought it into my tent instead. Normally, I would never do that, but considering I’m still covered in deer blood, I figure a few dried meals and a Mars bar won’t attract animals anymore than my sheer presence would. Micah is not at all happy with my reasoning, but reluctantly follows suit and places his food under his tarp.

Sometime around 10 p.m., Taylor arrives at camp, but this time I don’t wake up. Instead, Micah greets him and helps get him set up. Taylor has hunted the area before, and notes we are not in our regular camping spot. Thankfully he found us here; had he gone to our regular spot, he would have been camping right under my meat-hanging tree.

I toss and turn throughout the night, still quite cold, with the wind howling under the sides of my tent. From time to time, I can hear Micah rolling back and forth on his ground sheet. I’m thankful he isn’t snoring like some other hunters I know. I am dreading the morning—putting on wet clothes and sitting on the ridge waiting for the sun to rise will not be pleasant. Then a truly terrifying scream pierces the night.

My eyes snap open and all my senses are on full alert, but I can’t see anything in the darkness of my tent. The screaming continues and I know exactly what is happening—there is a bear in camp. I squeeze my eyes shut in hopes it’s all just a nightmare, but the screams keep coming. I can tell it’s Micah who’s in trouble, and he’s going to need my help. I struggle with the zipper on my sleeping bag, fumbling in panic. My imagination is running wild with images of what’s happening outside the tent. Is the bear on top of Micah? Will he have all his limbs? Will he be alive?

Finally free from the constraints of my sleeping bag, I grab my rifle and chamber a round. I struggle to find the tiny zipper on the tent door, and once I manage to locate it, I find that the teeth have frozen together. Here I am, battling with such a menial device while my friend is potentially being eaten alive. By the time I finally manage to unzip the fly, Micah has stopped screaming. “It’s gone,” I hear him say. All I can imagine, though, is the bear coming for a taste of venison-seasoned human in the next tent—mine—so I continue to clamber out.

Standing outside my tent wearing nothing but underwear and a beanie, and clutching my rifle, I hear branches breaking as the bear heads away from camp. Micah finally gets himself out of his fabric coffin as Taylor approaches and asks what just happened. I tell him a bear was in camp, and Micah fills in the rest. He says he was awoken by pressure on his left foot, then he began to slide across his ground sheet. That’s when he knew he was in trouble—a black bear had gotten hold of his foot and was dragging him out from under his tarp. Unable to find the zipper on his bivy sack, Micah resorted to kicking his legs and screaming as if he were being murdered. Luckily, it worked and the bear let go.

After a short discussion outside our tents, with our adrenaline pumping and body temperatures dropping, we all head back to bed. In my tent, I can’t escape the feeling of guilt—maybe I had caused the attack by convincing Micah to sleep with food nearby. Mostly, though, I can’t forget the sound of his screams. I’m always thinking about bears when I’m in the wilderness, and hearing a grown man scream leaves the imagination little room to wander. The menacing thought that the bear might return keeps me awake, at least until the adrenaline wears off and exhaustion sets in once again.