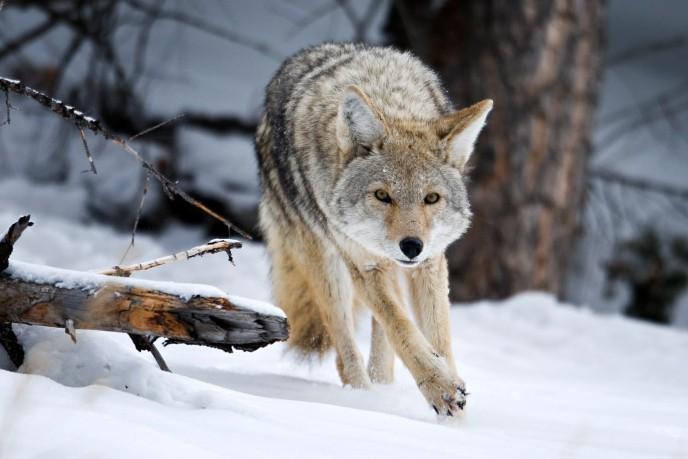 What to hunt in winter

The season's not over yet. Here's what you can hunt from January to March

So you think winter means the hunting season is just a fond memory, validated by a freezer full of venison? Not by a long shot. Across the country, there’s still plenty of great hunting for weeks to come.

Winter’s glamour hunt is for cougars, and topping that list is treeing big cats with hounds. The season lasts throughout the winter in most of British Columbia, and to the end of February in Alberta. It’s often a physically demanding hunt in rugged mountain country packed with snow, but if you can keep pace, there’s plenty of excitement until the cat is treed.

Another option is lynx or bobcat hunting. These smaller cats are hard-won trophies during the winter. Both bobcat and lynx are fair game through to the middle of February in B.C., though only bobcat are legal in Alberta and PEI. New Brunswick permits running hounds for bobcat to the end of February, but actually doing so is complicated since you need a bobcat permit, which is only available in an October draw, plus a trapping licence and a hound hunting permit.

Coyote hunting regulations are lenient, and winter hunting opportunities abound. The season runs to the end of February in virtually all provinces, and longer in some. On the island of Newfoundland, they’ll even pay you to shoot ’yotes. These predators are abundant, so sight-hunting as well as calling is worthwhile.

Wolves, on the other hand, require time, effort and well-honed predator hunting skills. All provinces from Quebec westward—except Saskatchewan—and the territories have seasons. In some cases, their range overlaps that of wolverine, which offers a bonus hunt in some units of B.C. (to mid-January), as well as the Northwest Territories and Nunavut. Alberta, Quebec and PEI allow winter hunts for fox as well.

I’ve always enjoyed hunting snowshoe hare after the regular hunting season has closed. Since their numbers are dictated by population dynamics rather than hunting pressure, snowshoe hare seasons are long, lasting to the end of February in many jurisdictions and even longer in others. But check the regulations carefully, since the daily quota swings from a few to no limit at all.

Another reason to give the regs a good read is discovering additional opportunities that often go unnoticed. For instance, while cottontail rabbits are protected in B.C.’s Okanagan region, introduced eastern cottontails are fair game in the Lower Mainland. Similarly, there’s no closed season on either cottontails or whitetail jackrabbits across the three Prairie provinces. Southern Ontario has cottontails and huge European hare, with seasons stretching to the end of February or later, and daily quotas allow half a dozen of each. Quebec has a limit on cottontails, and a season that runs to the end of March. The season on Arctic hare is generally open through the winter, with no limit in the remote regions where they’re found (insular Newfoundland excepted).

In the majority of regions, upland bird hunting has been shut down for weeks, but if you live in—or plan to visit—northern regions, don’t put that shotgun away yet. Most of the provinces, and all three territories have seasons on ptarmigan. Some, like Alberta, end in mid-January, while others like Quebec close at the end of April. And ptarmigan quotas are surprisingly lenient. Some ruffed grouse seasons are still open, though their days numbered, but you can always try the late pheasant seasons in southern Ontario, particularly on Pelee Island.

Migratory birds? If you happen to live on either the Atlantic or Pacific coast, there’s good hunting for a while yet. Ducks are open to January 20 in the southern B.C., along with Canada geese, though some pockets close a week or two earlier. These areas also have a late season for Canadas that opens February 11 and white geese—snows and Ross’—are another option in some locations.

Also take a look at southern Ontario and Nova Scotia for scattered Canada goose opportunities. There’s also sea duck hunting on the coasts of New Brunswick, eastern Quebec and Newfoundland. And if you’re feeling particularly hardy, give murres along the ice edge off the coast of Newfoundland a go. That’s one you won’t soon forget.

For big game hunters, there are a surprising number of opportunities to make the season last. Along the B.C. coast, for instance, you can bowhunt for blacktailed deer on Texada Island to mid-January, and on the Queen Charlottes the general season closes at the end of February. Oh, and there’s also a late season on mountain goats in the Prince Rupert area of the North Coast, ending about the same time.

Alberta has scattered general antlerless elk seasons during January in the Parklands, Foothills and Boreal management units while, in neighbouring Saskatchewan, there’s draw moose at Moose Mountain, and caribou for residents of Zone 76 in the remote northern part of the province.

Manitoba resident hunters can stalk caribou through to the end of February in the northern parts of the province, but there’s a more accessible hunt for feral boars running loose in the southern farmlands. There’s no closed season and no limit, but you are expected to get permission to hunt private property.

Resident hunters in Labrador have seasons on caribou that run through to late April and big game seasons for both woodland and barrenground caribou, muskoxen and, in some cases bison also remain open for some time yet in the territories, as does polar bear.

Close to home, check out local regulations for what are often considered nuisance animals—raccoons, porcupines, crows, rock doves (pigeons) and even squirrels in some provinces. They may not be glamour game like muskox or cougar, but they certainly help bridge the span to the start of bear and turkey hunting seasons.

For complete details on seasons and licensing, always check the most up-to-date local regulations. If you’d like to contact your local wildlife office, see our list.