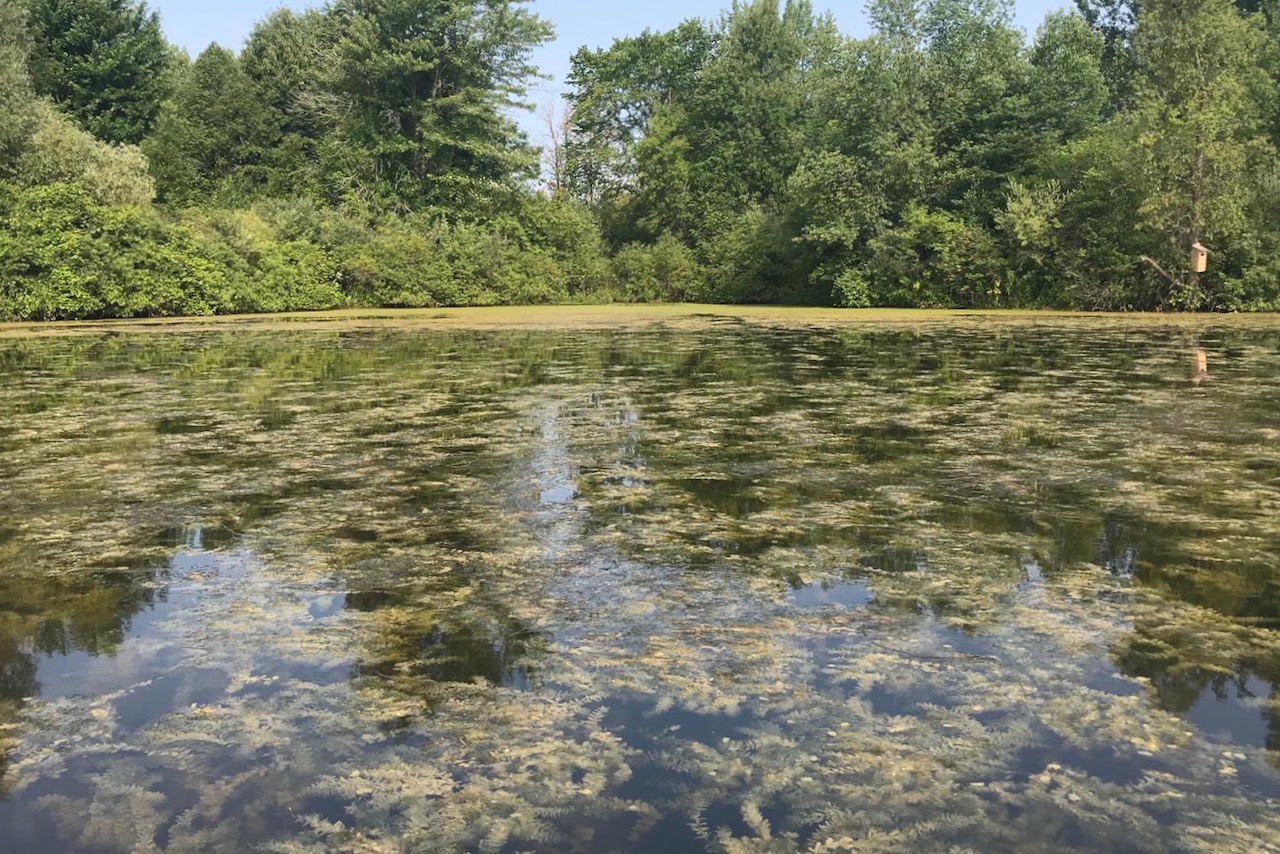 Opinions divided on how to combat Eurasian watermilfoil

With vast blooms of Eurasian watermilfoil appearing in Ontario again this summer, controversy is brewing over how to deal with the problem. First discovered in Canada in Lake Erie in 1961, the invasive aquatic plant has since spread throughout the Great Lakes, the St. Lawrence River, and many inland lakes across southern and central Ontario. It’s also found in Quebec and B.C., and across the U.S.

Believed to have first arrived in North America in the 19th century via ballast water from ships, the invasive plant reduces biodiversity by outcompeting native plants and reducing the amount of oxygen within ecosystems, making it harder for other aquatic species to survive. When large mats of Eurasian watermilfoil die off in the fall, meanwhile, the decaying plants can also reduce oxygen levels in the water. Making matters worse, the plant is very prolific, and easily spread via water currents, boats, trailers and fishing gear.

Cottagers, boaters and anglers hate Eurasian watermilfoil because it grows in thick mats that can hinder navigation and recreation. However, many are divided over how to manage the problem. At the centre of the conflict is Reward, a government-approved herbicide touted by the manufacturer as a “super-fast acting weed killer, which works great on floating and submersed weeds.” Reward’s main ingredient is Diquat, a chemical that was banned in the European Union in 2018.

CONCERN OVER SIDE EFFECTS

While some see Reward as a quick solution to a big problem, others say it could do more harm than good. The situation on Jack Lake (a.k.a. Jack’s Lake) near Apsley, Ontario, offers a case in point. Among the detractors is David Lean, a retired freshwater biologist and former director of the University of Ottawa’s environmental toxicology program. He was born in Apsley and is a long-time cottager on Jack, where 30 of the 500 cottage owners hired a Waterloo-based company last summer to spray Reward on the aquatic weeds in front of their properties.

“At first glance, it sounds like a great idea,” Lean says. “It gets rid of your weeds and that’s all there is to it. However, when you look at the details, it’s not that easy. It doesn’t kill the roots. If it’s $500 to spray this year, you can bet you’ll need to have them back to spray next year.”

The main problem for Lean isn’t that the fix is temporary, but that it’s potentially harmful to humans and aquatic life. While the Ministry of the Environment, Conservation and Parks, which grants permits to spray the herbicide, insists the chemical treatment is safe, Lean remains wary.

“Where they sprayed in Jack Lake is right next door to where people have their intakes for drinking water,” he says. “I really worry that people will get sick.” What’s more, he warns, the levels used to kill Eurasian watermilfoil also kill benthic invertebrates, organisms that fish eat living in the bottom sediments of rivers, streams and lakes. Plus, the herbicide doesn’t discriminate as to what plants it kills. “When you spray, you not only kill Eurasian milfoil, you kill the native species, too.”

Instead of applying Reward, Lean recommends using a rake to remove weeds around properties, then letting nature take its course for the rest. It could take up to 10 years, he says, but nature will balance itself out. “Every invasive species has an advantage for a short time because their natural enemies aren’t present yet,” Lean says. “If you go out and spray, you affect this balance, and you’ll prolong the problem.”

Another Jack Lake cottager, Alan Quarry, is equally concerned about the herbicide. Last May when he learned about the plans to spray, he founded the Jack Lake Weed Warriors to raise awareness and lobby the government to put a moratorium on using the herbicide. At the same time, however, he’s not prepared to simply let nature take its course.

Among other mitigation methods, Quarry and his 260-member group are looking into buying a special boat designed to essentially vacuum up the weeds with the aid of a scuba diver, who uproots the plants and feeds them into a suction tube. It’s a labour-intensive operation, Quarry says, but one of the only ways to extract the entire plant—and avoid adding chemicals to the environment.

To learn more about stopping the spread of invasive species, go to www.outdoorcanada.ca/invasive.