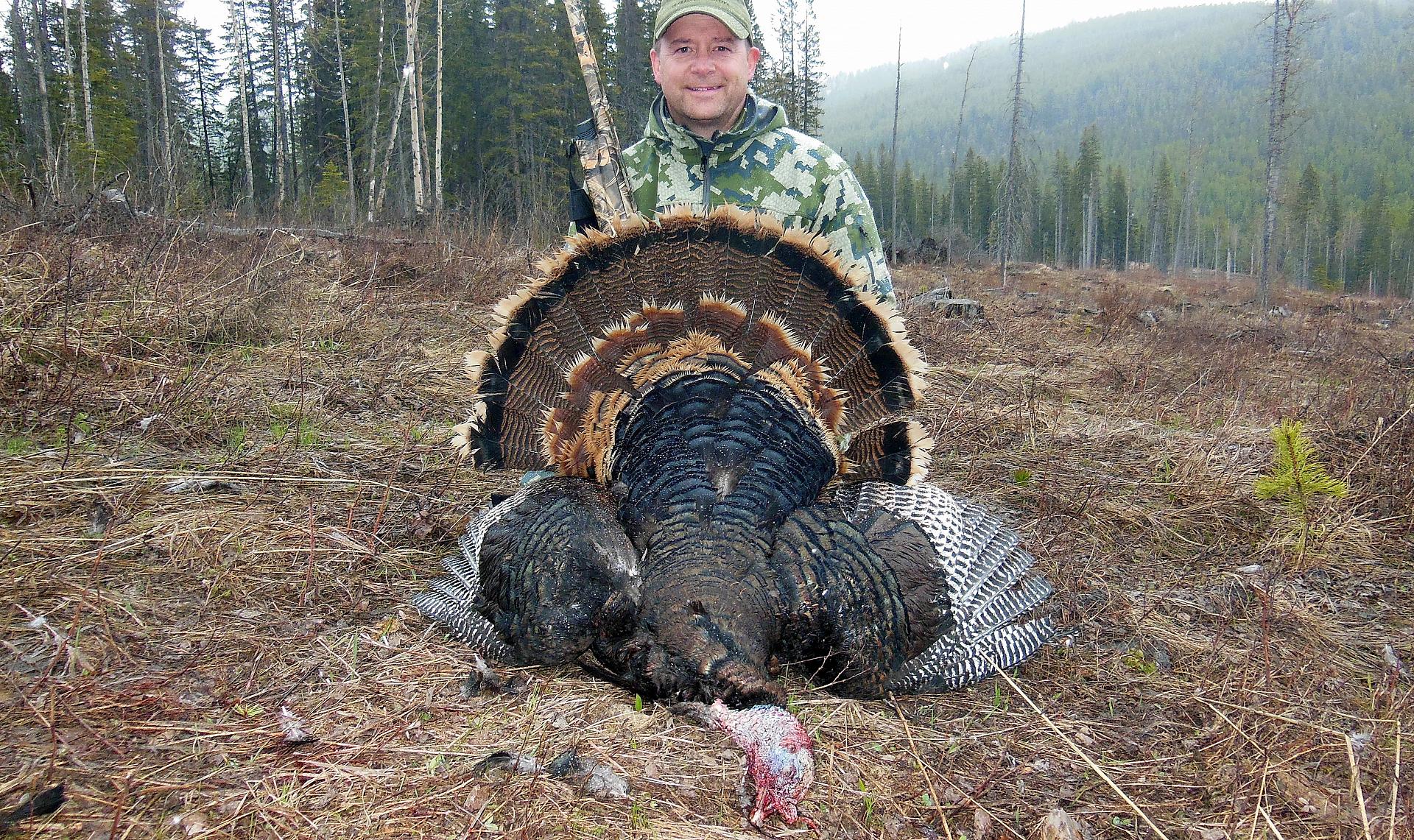 This spring, go mad for Merriam’s

Never hunted for the wild turkey of the West? Here’s how to get in on the craze

Out of breath, sore from climbing and puzzled by the apparent lack of wild turkeys, I couldn’t help but wonder if we were doing something wrong. How such large birds, reputed for their propensity to gobble, could so aptly vanish amid the rolling foothills was beyond me. But my wife, Heather, and I had done our research and had located key roost trees. Plus, we knew when, where and how to use our arsenal of calls—it would only be a matter of time before a bird appeared.

The very next day, in fact, we cashed in after finding a flock of 10 turkeys in a clear-cut high up on a mountain. After carefully sneaking in closer to the vocal birds, we quickly set up a couple of decoys, nestled in against a nearby pine tree and yelped with a box call. Several excited toms and jakes gobbled back, and moments later a mature bird sporting a nine-inch beard eagerly raced in to check out the commotion. Duped by our yelps, putts, clucks and purrs, he made the fatal mistake of standing tall, presenting me with the shot I’d been waiting for.

I’m mad for Merriam’s turkeys. Why? Because they’re just plain fun to hunt and, if you invest the time and energy to plan properly, success is usually in the cards. Preparing for a turkey hunt is no small feat, but by covering the following bases, you’ll be well on your way to enjoying a fine wild turkey dinner.

There are four wild turkey subspecies in North America—Merriam’s, Eastern, Rio Grande and Osceola—and each is unique. Our subspecies here in Western Canada is the Merriam’s, which prefer open deciduous forests and forest edges in foothills and semi-mountainous areas. They commonly roost in larger pine trees on ridges in the evening as the sun goes down.

To find such potential turkey hot spots, start preparing well ahead of the season with some basic research. Aside from consulting your provincial hunting regulations, the next most important pre-hunt step you should take involves poring over forestry maps and studying satellite images on Google Earth—with the Internet, a wealth of information is just keystrokes away. Where land is privately owned, county maps are invaluable.

Networking is also golden. Ask provincial biologists and wildlife enforcement officers for their advice on where to find wild turkeys and how populations are doing in a given area. With a little luck, they may even suggest a few hunting hot spots. Also speak with hunters who have been successful in the past, as well as area landowners. Ranchers talk among themselves and it usually only takes a few calls to pinpoint some great spots to hunt.

Remember, if hunting on private land is an option, it’s always prudent to contact the landowners well ahead of the season to ask for permission—in my experience, most are open to turkey hunters. Gaining access to one property is good, but if you secure five or six places to hunt, your odds go up exponentially.

Western Canada’s spring turkey hunting season takes place during the breeding and nesting period in May. A heavy snowpack often sticks around until just a week or two before the opener, but if conditions allow, walk the properties you plan to hunt. Locating roost trees should be your first priority. Active roosts are often used year after year, and they’re easily identifiable by the mounds of turkey droppings at the base of the tree.

Once you have pinpointed where turkeys roost, the odds tip in your favour. Now when the season begins, you can move in and set up your decoys within a couple hundred yards of the roost and begin calling as the sun comes up (be sure to check your local regulations for legal light times). Most years, toms and jakes are eager to gobble and ready to breed even as early as mid-April. If all goes well, a long beard will fly down and pay you a visit.

If a tom doesn’t come marching right in, however, looking for a vocal gobbler is a lot like hunting elk in September. They can be extremely vocal, but they can also be very quiet. When the latter happens, you’d swear the birds have all been beamed off the planet. Persistence is the name of the game with turkey hunting.

One common way to find birds is to use locator calls to prompt shock gobbles. Once you know where a long beard is hanging out, you can move in, set up and get serious about calling him in. Among the most productive locator calls are those emulating a crow, owl, woodpecker or coyote. These sounds will often prompt a tom or a jake to gobble. They can be useful throughout the day, but they’re especially productive in the early morning and late evening as birds congregate at or near their roosts.

Turkey hunters typically employ four main types of commercial call—the box, slate, diaphragm (mouth) or push-button friction call—mostly to mimic hen yelps, putts, clucks and purrs. Each sound has its time and place, so it’s important to know when exactly to mimic the right sound to bring a gobbler running in.

If a tom is tending several hens and there are jakes in the mix, for example, it can be productive to begin with a series of five or six yelps, then pause and wait. If he doesn’t show interest, step it up by adding in some excited putts, clucks and purrs. If you can get the tom worked up, he’ll be more apt to come take a look. As gobblers are eager to breed, they’re often keen to declare dominance and take on intruders. With that in mind, adding a couple of hen decoys and a jake decoy to the equation can be dynamite.

While most jurisdictions allow for bowhunting and even muzzleloader shotgun hunting for wild turkeys, most hunters opt for a 12-gauge shotgun, with the barrel length a matter of personal preference. I use a 3½-inch Benelli Super Vinci autoloader, mostly because I’m already comfortable with it from wingshooting. What does make a difference is the choke and ammunition, so that the shot pattern hits its mark with even distribution.

With this in mind, it’s always wise to pattern your shotgun (above) before your hunt; you can pick up an assortment of realistic turkey targets from your local hunting store. My own go-to load is 3½-inch, two-ounce Winchester Long Beard XR in #5 shot. I also use a custom H.S. Strut Undertaker full-choke tube to ensure a tight pattern out to 50 metres.

Having scouted, practised calling and patterned your shotgun, it’s time to hit the woods. You’ve done all you can do for your Merriam’s hunt, and the outcome will depend on how well you apply your knowledge, as well as the decisions you make in attracting a bird to your set-up. But beware: Once you’ve experienced the thrill of bringing in a strutting tom, I guarantee you, too, will become mad for Merriam’s.

Alberta contributor Kevin Wilson has been hunting Merriam’s turkeys for more than 15 years.

A management success story, the Merriam’s turkey population of Western Canada has been growing steadily since the B.C. Game Commission first introduced the birds on James Island near Vancouver Island in 1910. And as early as the 1960s, Merriam’s began expanding their range from Washington, Idaho and Montana northward into southern B.C.

Then in the 1980s, the B.C. government further relocated turkeys from the province’s Creston Valley area to the East Kootenay region. Today, populations are thriving on Vancouver Island and the southern Gulf Islands, as well as in the Okanagan, with the highest densities in the Kootenays.

In 1962, Merriam’s were introduced into southeastern Alberta’s Cypress Hills, and in 1963 and 1973, a combination of hatchery-raised and wild-trapped birds were transplanted from Nebraska to the province’s Porcupine Hills Forest Reserve. These populations have since continued to disperse into wider ranges as far south as the U.S. border on up to well north of the Oldman River.

Turkeys have also since expanded their range eastward into the southernmost regions of Saskatchewan, where there’s now a modest but stable population. A hunting season has yet to be opened there, however.

In Manitoba, an organization called Wild Gobblers Unlimited first began introducing the Eastern turkey subspecies in 1958; with successive releases, the population has steadily increased. More recently, Merriam’s have been introduced and Manitoba now maintains a smaller but sustainable population of that subspecies in the southernmost regions of the province. Both spring and fall resident turkey hunts are available.