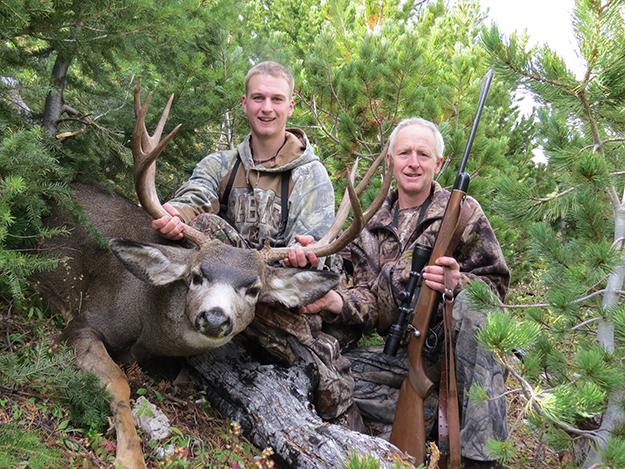 Whether they capture a successful hunt, an amazing catch, a spectacular sunset or a fun hike with the kids, photos bring us back to the scenes of our treasured outdoor experiences. And judging by the huge number of entries in Outdoor Canada’s annual photo contest, our readers certainly enjoy their fair share of adventures. As always, it was tough to pick the winners, but these are the images that really stood out from among the 2,000-plus entries. Many thanks to everyone who participated, and we look forward to seeing even more great photos next time around. 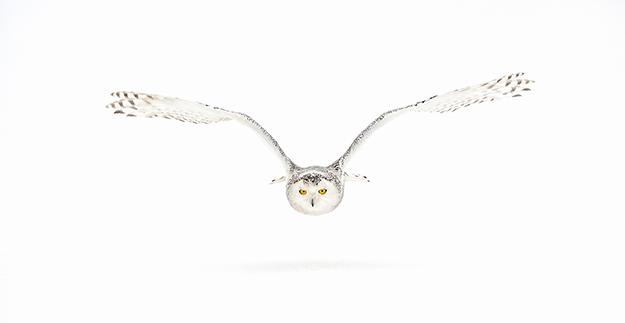 Photographer: Bill Boswell
Where: Barrie, Ontario
When: February 2013
Details: An “enthusiastic amateur” photographer from London, Ontario, Boswell spent two hours shooting this female snowy owl during a field trip with the London Camera Club. “We met with a guide who knew this particular owl visited a farm on an regular basis,” Boswell says. “I liked this shot since it best shows off the intensity with which the bird hunts.”
Overall grand prize: $1,000 Bass Pro Shops Gift Card 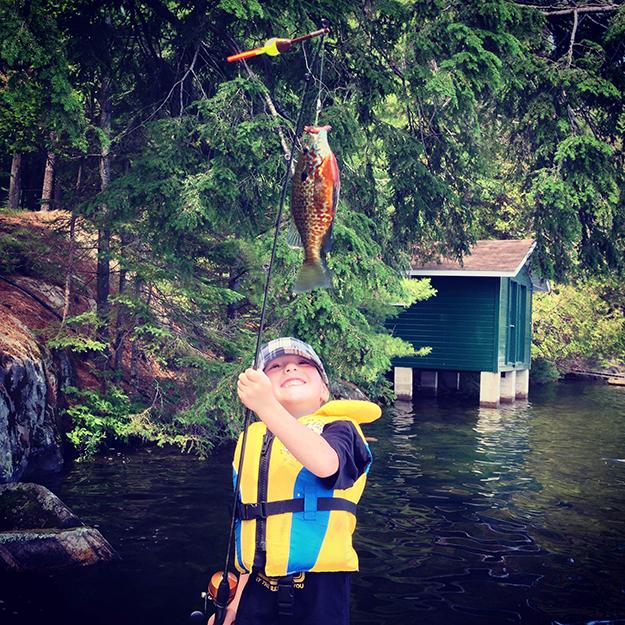 Photographer: Phillip Gaudet
Where: Jack Lake, Ontario
When: July 2013
Details: During the Canada Day long weekend, Gaudet was on the dock with his friend Stephen Ward as the pair watched Ward’s six-year-old son, Ryan, fish for sunfish and rock bass. “Ryan loves to fish,” Ward says, as is evident by the look of joy on his face after reeling in this lunker pumpkinseed.
Prize: Broil King Imperial XL BBQ (MSRP $1,800) 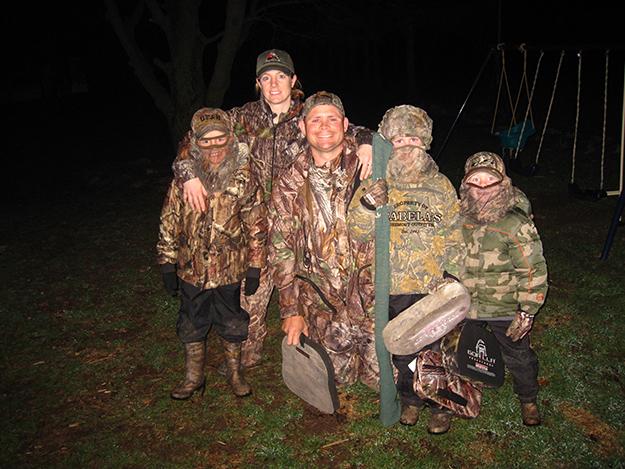 Photographer: Joel Pegg
Where: Bluevale, Ontario
When: April, 2013
Details: “I am an avid turkey hunter, but this particular turkey hunt was by far my most memorable,” Pegg says. “It combined my two true loves—family and hunting.” He says his wife and kids had a great time, and despite not harvesting a gobbler that morning, they had plenty of excitement when several answered their calls and flew out of their roosts in front of them. Left to right are Joshua, Shannon, Joel, Rachel and Tyler.
Prize: Broil King Keg 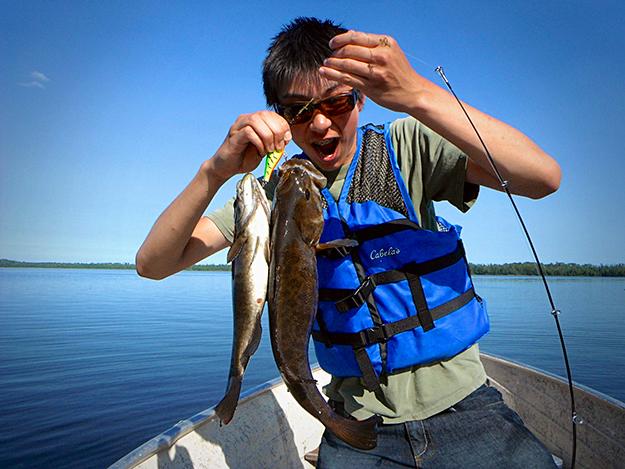 Photographer: Caleb Wong
Where: Nopiming Park, Manitoba
When: Summer 2013
Details: On the second day of a camping trip, Wong and his buddies split into two boats to create a mini bass tournament. “The bass were vicious,” Wong says, “striking everything we threw at them.” Judging by this cool pic of two fish on one lure, it’s certainly obvious they were hungry!
Prize: Broil King BBQ Tool Set 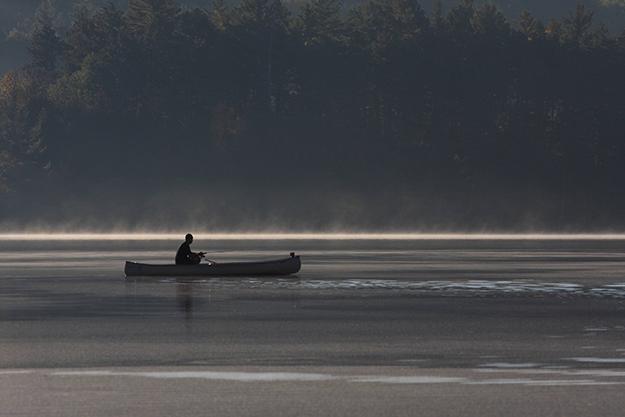 Where: St. Andrews Lake, Ontario
When: October 2013
Details: Fownes’ friend Renny Leskiw had paddled out in front of their backcountry campsite in Algonquin Park for some pre-breakfast bass fishing. “As the sun rose and the mist peeled off the glassy water, I was provided with several opportunities to capture the lone fisherman enjoying a quiet start to the morning,” Fownes says. Unfortunately, Leskiw came back empty-handed, so they had to stick to their breakfast staple—bacon, of course.
Prize: $500 Pure Fishing Assorted Fishing Prize Package 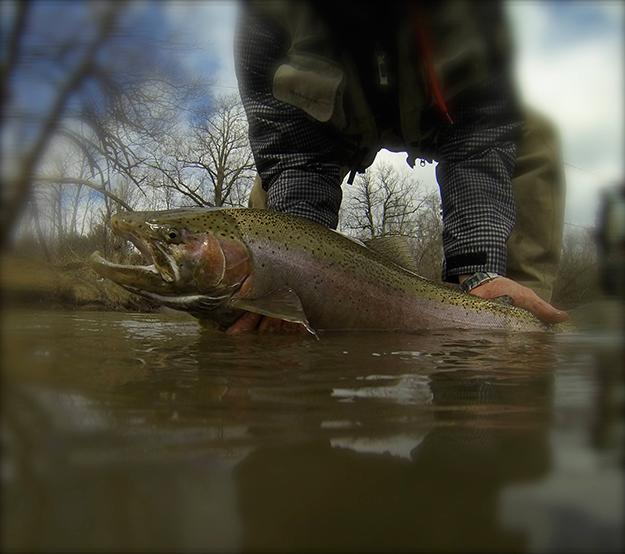 Photographer: Paul Cesario
Where: Lake Ontario’s north shore tributary
When: Spring 2013
Details: “I captured this photo of my good friend Maximilian Smith as he was releasing this beauty steelhead,” Cesario says. A hard-core angler, Cesario is also a committed catch-and-release advocate. “Releasing these big fish back to the tributaries to spawn will contribute to healthy fisheries for years down the road and create more fishing opportunities for future generations.”
Prize: $250 Pure Fishing Tackle Prize Pack 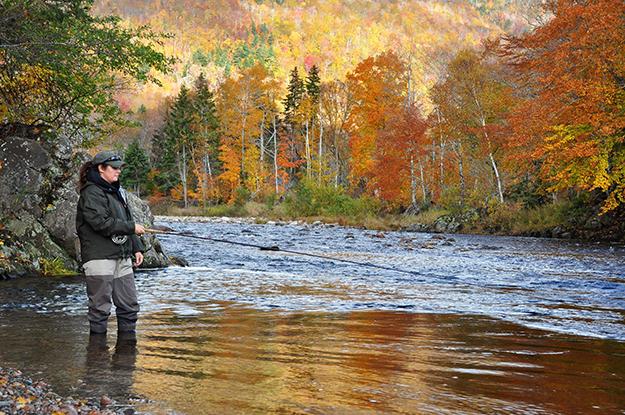 Photographer: Jeff Hiltz
Where: Margaree River, Nova Scotia
When: October 2013
Details: “This photo was taken on the last day of the Celtic Colours Festival in Cape Breton and, fittingly, my fiancé, Cindy Creighton, was swinging a Celtic Beauty hair-wing streamer she’d tied herself,” Hiltz says. “There were plenty of Atlantic salmon in the pool showing themselves, but they appeared to have lockjaw this day.”
Prize: $100 Pure Fishing Tackle Prize Pack 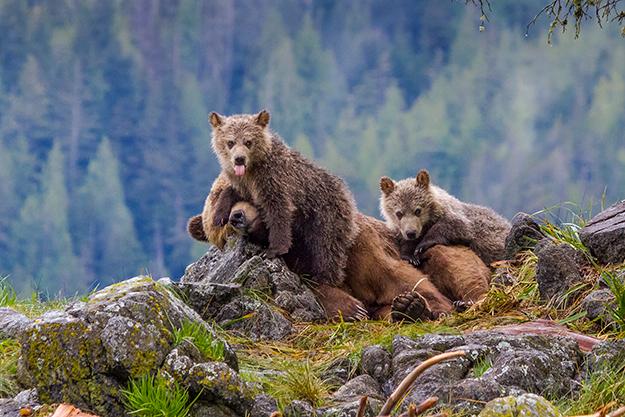 Photographer: Derek Kyostia
Where: Great Bear Rainforest, B.C.
When: May 2013
Details: “While out exploring and fishing the B.C. coast, I happened upon this family of grizzlies,” Kyostia says. “Mom seemingly collapsed from the exhaustion of these two little mischievous handfuls, but that didn’t deter them from harassing her while she tried to sleep!”
Prize: Thermacell Outdoor Comfort Pack (MSRP $750) 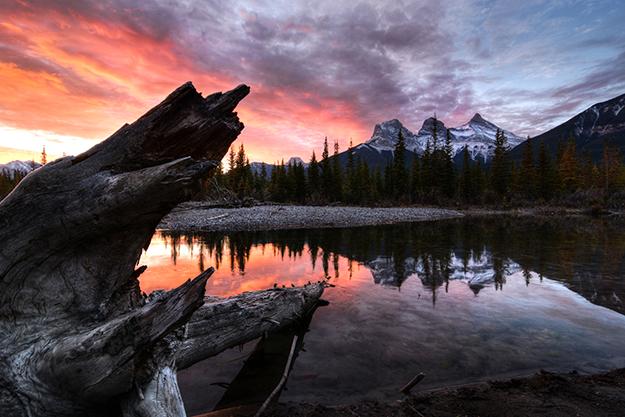 Photographer: Marko Stavric
Where: Canmore, Alberta
When: October, 2013
Details: Stavric says this particular spot on Policeman’s Creek, a small diversion of the Bow River, is one of his favourite places to catch the sunrise. “The Bow Valley was hit pretty hard [by the 2013 Alberta flood], and debris was still scattered everywhere, even months after the flooding,” he says. The sun came up and lit up the clouds hanging over the Three Sisters peaks. “It lasted only for a few seconds.”
Prize: Thermacell Heated Insoles Pack 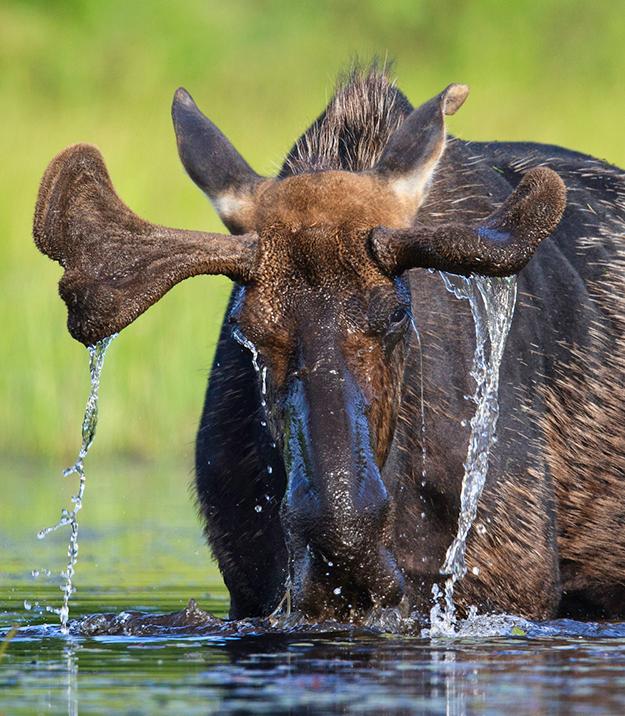 Photographer: Scott Martin
Where: Algonquin Park, Ontario
When: June 2013
Details:Martin ventured to the park last June specifically to photograph wildlife. He caught this moose in the water eating a favourite spring delicacy: the yellow pond lily. “The growing paddles in this bull moose created the perfect water fountain every time he lifted his head out of the water,” says Martin, noting that the moose was not at all bothered by his presence.
Prize: Thermacell Mosquito Repellant Pack

Photographer: Troy McAdams
Where: Grand Bend, Ontario
When: October 2013
Details: McAdams was set up in a clover field when he snapped this photo of his hunting partner Tim Clayton. McAdams, Clayton and two other friends were wearing ghillie suits, hidden among 60 full-body goose decoys, when the birds started coming into their set-up at daybreak. “In about an hour we had a four-man limit,” McAdams says.
Prize: Zeiss 2-10×42 Conquest HD5 Riflescope 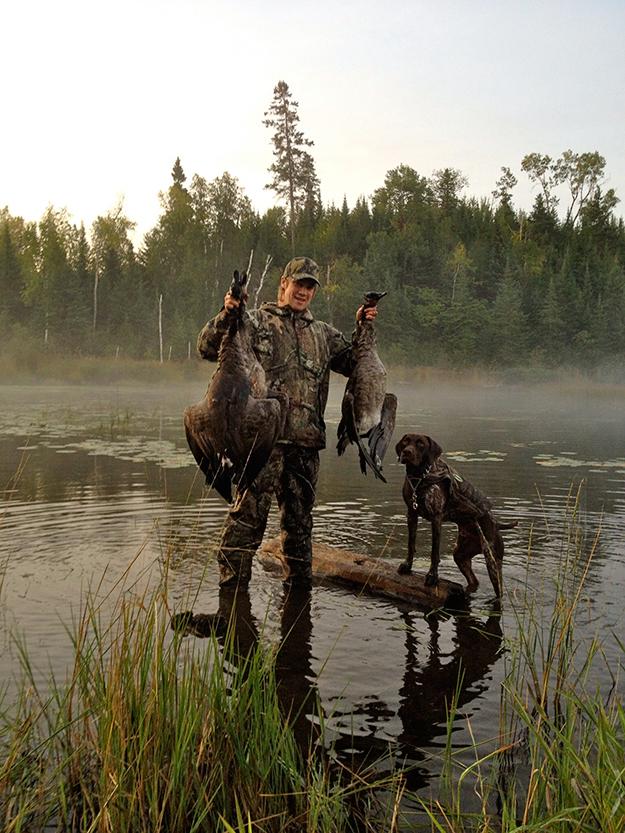 Photographer: Shelby McDonald
Where: Lake of the Woods, Ontario
When: September 2013
Details: As an early-morning fog lifted off the lake, McDonald snapped this photo of her boyfriend, Dylan Smith, and their 2½-year-old German short-haired pointer, Remi, with their first three geese of the season. “I love how the camo Dylan and Remi are wearing work so well with all the colours in the picture,” McDonald says.
Prize: Puma White Hunter Fixed Blade Knife

Photographer: Marcus Lunt
Where: B.C.’s Region 3
When: October 2013
Details: Eight months after surgery to remove tumours from his spine, 17-year-old Lunt was picked for a sheep hunt in B.C.’s limited-entry hunting draw. He and his father, David, went on the hunt together. Although he didn’t get a sheep, Lunt did connect with this beautiful mule deer and set up the timer to get this impressive shot of the trophy animal. And thankfully, the young man is now on the mend.
Prize: Zeiss 10×42 Terra Binoculars