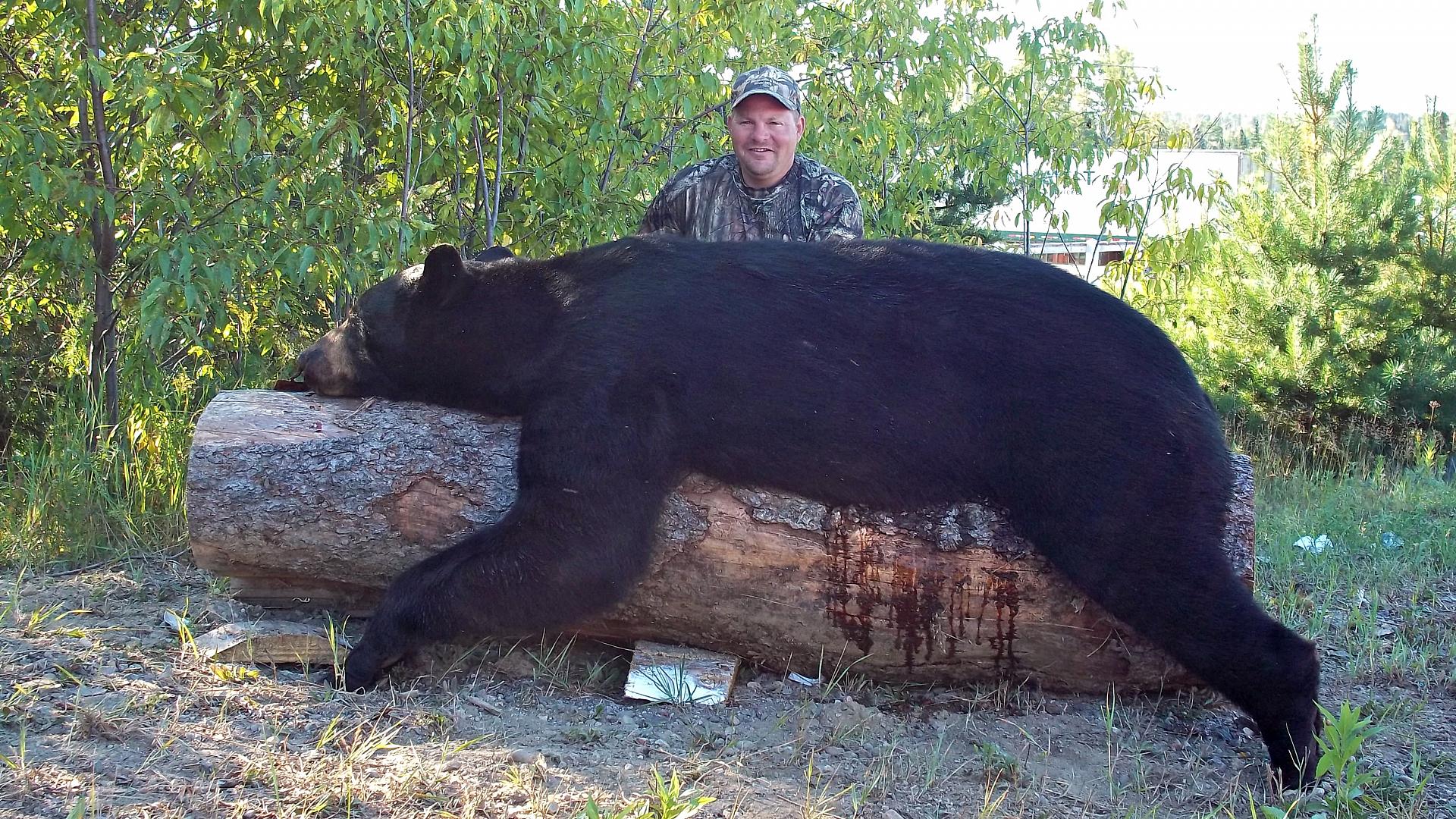 5 Essential Tips and Tactics for a Successful Spring Bear Hunt

What You Need to Know About Spot-and-Stalk, Baiting, Calling, Guns and Loads

I don’t fully understand why there’s such a small nucleus of hard-core black bear hunters across Canada. Most hunters, it seems, either take bears for granted, ignore them completely or consider them an afterthought. Those who do take black bears seriously, however, personify single-minded focus like few others. What do they know that others don’t?

Widely distributed and generally plentiful wherever they can find food and enough cover, black bears can be hunted from Newfoundland to Vancouver Island, and from the U.S. border to the territories. Despite healthy populations across much of their range, however, these bruins often live their lives in relative anonymity, their shy personalities rendering them near invisible.

And therein lies the addictive element for dedicated bear hunters—the challenge of actually finding one, especially a mature boar.

Spring is the prime time for pursuing these truly fascinating animals, offering hunters an opportunity to head afield after several months of weather-induced torpor—along with the chance to collect a finely furred rug and some excellent meat. Then there’s the adrenaline-fueled excitement that only comes with hunting an animal that has both the tools and temperament to keep you guessing.

Not that hunting black bears should be entirely guesswork, at least when it comes to proven tactics and firepower. Here’s how to tip the odds in your favour.

Stalking to within range of a mature black bear boar is one of the more thrilling hunts most of us will experience. No matter how calm and cool you think you may be, even the most seasoned hunter feels a little rush when closing the distance. Like a roller coaster ride, it’s the uncertainty about how things might turn out that makes it all the more fun.

Spring bears are slaves to their stomachs and will generally gravitate to the easiest available food source after emerging from their winter dens. Across the vast majority of black bear habitat, they’ll feed on naturally greening vegetation first. Wherever you can find early-emerging grasses, forbs or buds, you’re likely to also find black bears.

Where conditions allow, drifting river valleys while glassing the south-facing slopes can be a successful tactic. If you do spot a bear when floating, be sure to identify key landmarks to guide your stalk before setting foot on shore. Having drifted for spring bears several times on Alberta’s Peace River, I can tell you from experience that riverbanks and valleys looks considerably different when you’re slogging up them than they do from the water.

In forested agricultural areas, meanwhile, bears will often go after grain, especially barley and oats—as well as fruit crops—that weren’t harvested the previous fall. My first black bear, in fact, was a beautiful chocolate-coloured animal I spotted in an oat field near Alberta’s Smoky River Valley. I stalked the bruin to within nine yards—much closer than either of us wanted to be—almost stumbling on to him while creeping through the waist-high grass. Fortunately, I was able to square the situation away before he had a chance to react.

Winterkilled ungulates are also highly prized spring food for bears, when and where they can find them. It’s unusual for hunters to come across carcasses before bears and other predators do, but if you find one first, take advantage of the opportunity.

Once you’ve identified a likely spring feeding area, search for signs of bear activity. The most obvious are tracks, but scat and fresh claw marks on deciduous trees can also reveal a bear’s presence. Boars have a habit of standing and rubbing their backs on small trees by bending them over their shoulders with their front paws. The trees often break, so if you come upon one, it’s a sure sign there’s a boar in the area.

Black bears rely more on their noses than any of their other defences, so it’s critical to position yourself downwind before beginning your stalk. Their eyes and ears may fail them, but their noses never will.

Spot-and-stalk hunters rely heavily on their optics to save kilometres on their treads. In most situations, quality binoculars in 8x or 10×42 provide the magnification needed to find and evaluate bears at a distance, as well as the light-gathering capacity to be effective until the end of legal shooting.

When glassing at extended distances, as is common in the foothills of Alberta and B.C., or along major river drainages, a spotting scope is also invaluable, especially for determining whether a bear is of trophy quality (see “Field judging”). Rifle hunters and bowhunters alike are also advised to carry a laser rangefinder; contemporary models are compact, lightweight and accurate to within a metre or two.

Baiting is the most popular and effective method for hunting spring bruins. Choose a baiting site in an area that’s likely to hold good numbers of bears, meaning forested cover close to a reliable spring food source. You then need to position your bait so that cautious bears can approach it from cover; mature boars, in particular, are unlikely to traverse large patches of open ground during legal shooting hours.

Since you’ll need to regularly refresh your bait, be sure to choose a site that’s within easy access of an ATV trail or other route. Set up your treestand or blind away from the trail and opposite of where you expect bears to access the bait, keeping in mind the prevailing wind direction. It’s all about ensuring that bears feel relaxed while feeding, while allowing you to safely leave bait site.

Along with people, pigs and rats, black bears are quintessential omnivores, willing to eat just about anything. So for bait you can use practically any food as long as it’s highly odorous and available in large quantities. Every hunter has a favourite bait. For some, it’s beaver carcasses, meat scraps or donuts; for others it’s popcorn, oats and molasses, or even Kool-Aid soaked bread. Most bait hunters use a 45-gallon drum to hold their bait; be sure to chain the barrel to a tree, or you’ll spend an inordinate amount of time searching for it after a bear drags it off into the forest.

Some hunters liberally douse their bait site with vegetable oil, irrespective of the primary bait. Once the smelly and sticky oil clings to visiting bears, they’ll unwittingly create scent trails that other bears will follow into the area.

I first tried calling black bears while hunting Vancouver Island’s mammoth bruins with renowned outfitter and television personality Jim Shockey. The usual strategy on the island is to glass open forest cutblocks until you find a feeding boar, then carefully manoeuvre into shooting position.

After spotting a bear 500 metres away across an open slope and determining it wasn’t the quality I was looking for, I pulled a varmint call from my pocket, just to see how the bear would respond. At the first squeal, the young boar turned in my direction, and after my third dying rabbit wail, he was confidently heading toward me. If I stopped calling for more than 30 seconds, the bear would hold up; when I resumed, so did he. At 75 yards I quit calling altogether, not wanting to put either of us in an uncomfortable situation.

Since that revelation, I’ve called bruins a number of times. As with antler rattling for whitetails, you don’t always get a response, but it works often enough that it’s a legitimate tactic. I’ve only used varmint squeals, but other hunters say they’ve also had success with fawn bleats. That makes sense given that the young of moose, caribou, elk and deer are always on the spring bear menu.

You can call bears from treestands and ground blinds or while still-hunting, but always strive to call upwind. And only call if you can see an approaching bear from a long distance; that way, you’ll have time to put a stop to the encounter if the responding bear is a sow or young boar.

While black bears can grow to massive sizes—several Manitoba specimens have topped 800 pounds—the average weight of a mature spring boar falls within the 200- to 350-pound class. And despite their bulk, black bears have relatively thin hides, akin to deer. But don’t let that fool you: these are resilient, heavily muscled, thick-boned critters.

The black bear’s vitals sit farther forward and lower than those of a whitetail, which explains why most unrecovered bears were shot too far back for a lung shot. And since a black bear’s long hair absorbs blood, there’s less chance of having an easy-to-follow blood trail. With all that in mind, use well-constructed bullets and larger calibres than you would for deer—you don’t want to crawl into the thick stuff on hands and knees to sort out a wounded bear.

Typical black bear cartridges for spot-and-stalk hunters begin at the .270 and extend up to the .300 magnum family. Flat-shooting cartridges of this ilk will handle whatever shot arises, from less than 50 metres up to 300 metres depending on the terrain. If you’re hunting Vancouver Island or other habitats with large-bodied bears and extremely dense escape cover, a .338 is not out of place. In fact, it’s always best to be over- than under-gunned when hunting bears.

Hunting over bait, meanwhile, means short-range shooting, where modest velocities and stout cartridges shine; excessive speed can otherwise lead to bullets breaking up on impact and not providing enough penetration to ensure clean kills. In this regard, the venerable .30-30 has accounted for plenty of black bears over bait, and even in today’s world of new and improved cartridges, it needn’t take a back seat. Other good, if less popular, options include the .358 Win. .35 Whelan, .444 Marlin and the time-tested .45-70.

As for bullets, choose a heavy-for-calibre premium option that ensures high weight retention and maximum penetration. Hunters have never had more selection when it comes to factory-loaded ammunition than they do today. Great bullet choices for bears include, but are by no means limited to: Barnes’ TSX family; Nosler’s Partition and AccuBond; Hornady’s InterBond; the Speer Grand Slam; Swift’s A-Frame; and Federal’s Trophy Bonded Bear Claw.

Still not convinced spring bear hunting is for you? There’s only one way to find out for sure: dust off your gear and get out there and enjoy some time afield.