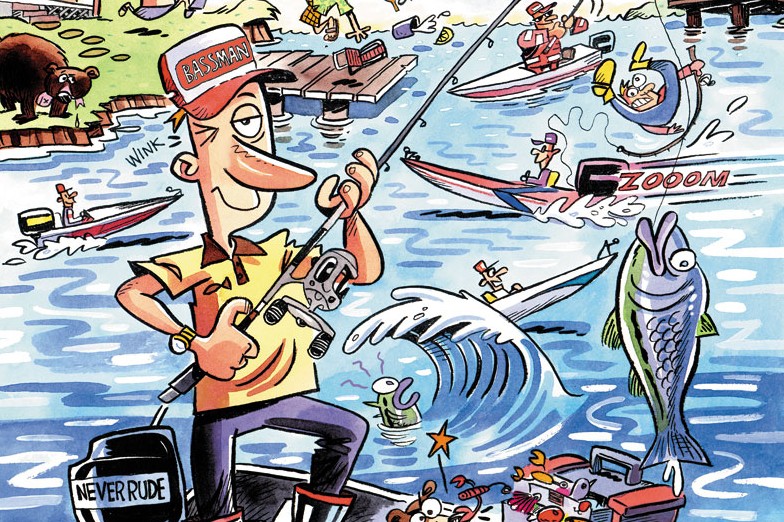 So You Think You're Good

Want to See How You Stack Up to Other Anglers? Here's How to Succeed In Your First Tournament.

If you love to fish, and want to take the next step and find out how good you are compared with other anglers, why not try your hand at a tournament or two? The worst you could do is spend several hours on the water trying to catch fish—and that’s what you do for fun anyway. The best you could do is walk away with cash and prizes.

Last summer, my fishing partner and I took the plunge and put our abilities on the line. After five tournaments in eastern Ontario, we saw our position in the standings climb from 55 (out of 65) to 51, 25, 17 and, finally, a podium finish of sixth place. It was a steep learning curve, but the feeling of satisfaction and accomplishment was wonderful. To help make your first tournament experience as enjoyable and, hopefully, successful, here are the top seven lessons I learned over the summer.

If you plan on hitting a bass tournament, you’ll need to master the baitcasting reel. Until this past summer, I’d always used spinning gear because that’s what I learned on. But I quickly found out that the baitcaster gives you longer distance, more control and, most importantly, better leverage for hauling the hogs out of the slop. Baitcasters can be temperamental, especially for those with little patience, and result in plenty of bird’s nests. All you can do is practise, and practise some more. I headed over to my local ball diamond to practise, standing on home plate and casting a heavy jig (with the hook removed) to the three bases. You may get some funny looks from passersby, but the practice will definitely help your accuracy.

For some reason, Mother Nature gets a kick out of watching anglers pre-fish in warm, sunny weather, only to roll in a cold front the night before the tournament. The change in weather can have an adverse effect on the bite, so to compensate you have to be ready to switch lures, presentations and locations. By staying abreast of forecasts, you can earn a little more time to adjust your strategies accordingly.

Some cottagers find fishing tournaments to be a nuisance, usually because of the way the anglers behave. If you’re fishing around docks, be careful. You wouldn’t want someone cracking a half-ounce jig off the side of your boat, so don’t do it to others. As well, respect the rules of the water. You may have a boat that can do 65 miles an hour, but it doesn’t mean you have to drive that fast-particularly when you see people enjoying other water sports, or when there’s a no-wake zone.

Anglers sometimes get the idea that they know all there is to know about fishing. But when you stop learning, you stop succeeding. If you’re a newbie in a tournament, don’t be shy about asking the veterans what they’re using and how they’re using it. I’ve approached several long-time competitors in the Renegade Bass series, and they’ve had no problem offering advice; the point of a competition is to have competition, so it’s in their best interest to help out the new kids on the block rather than dissuading them from participating.

I love the pre-fishing part of tournaments—the more fishing and the more time on the water, the more enjoyment you get. At first, I thought it was weird to pre-fish a body of water in hopes of finding the same fish several days later during the tournament. But it’s definitely required. You’d be hard-pressed to find someone place on the podium who hadn’t pre-fished the lake. The bottom line is, you must weed through a body of water to find the productive areas to hit during the actual competition.

I still drool over those huge, expensive bass boats, the ones that cost almost as much as a house and chew through gas like a muskie through perch. But bigger isn’t always better. Sure, they’re powerful and get you around with all the bells and whistles, but they come with a huge price tag. And if it’s expensive to buy, it’s expensive to repair and maintain. Besides, last year at the Renegade Bass tournament on the Ottawa River, the winning duo won the event with their older 16-foot boat and 70-horse outboard. While the competitors with the big boats went home with the big boats, those two went home with the cash. The lesson here? The boat isn’t everything.

Every angler has a favourite lure or bait. For me, it’s a Texas-rigged black worm, and at the cottage, it always produces. But I’ve found that when the bite’s off in a tournament and your favourite lure isn’t turning them on, change it. Loyalty is great when it comes to your spouse, but when it comes to fishing, give the fish whatever they want. In the first tournament in which my partner and I did well, we constantly switched lures until we found something that worked—crankbaits. I hadn’t thrown a crank in years, but on that day the change meant the difference between an empty livewell and a podium finish.

Ed Hand is an outdoor writer from Manotick, Ontario.