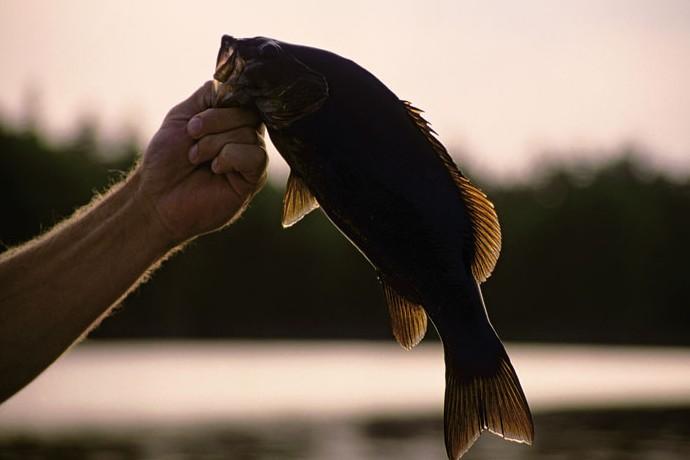 Where Action-starved Anglers Should Fish in New Brunswick & Nova Scotia

“At home, there’d be a largemouth on the shady side,” said my son James as he pulled a yellow-skirted spinnerbait past the remains of a submerged spruce. His home being the Ottawa region, the observation rang true. But here on Nova Scotia’s Little River Lake, it was a smallmouth bass that promptly bit down on the lure instead.

So illustrates one of the major differences between the bass fisheries in the East Coast and the rest of Canada: with no largemouth to compete with, the East’s smallmouth bass have seized the opportunity to colonize all suitable habitats. The other big difference is cultural. By and large, Maritimers have yet to acquire a taste for bass, which makes for a small harvest. All of this gives fisheries managers a healthy comfort zone for setting long seasons.

In New Brunswick, anglers can chase bass from mid-April through to mid-October, while in Nova Scotia the season is even longer-from April 1 to November 30. To protect against possible excesses, some periods in both provinces are catch-and-release only. There are also multiple gear and bait restrictions. (For the complete fishing regs for both provinces, please go to the applicable links on our Web site.)

Cultural preferences notwithstanding, bass fishing is becoming increasingly popular in the Maritimes. As trout stocks and habitat diminish, anglers are looking elsewhere for sport, and bass fit the bill. Then there’s the surge in televised bass tournaments, which also whet local appetites. For those ready to taste the action, here are the best spots in New Brunswick and Nova Scotia to satisfy the craving.

Bass from the Past

By the mid-19th century, many East Coast stocks of native gamefish, namely brook trout and salmon, had been decimated by overfishing and habitat destruction. With a reputation for being both hard-fighting and good-tasting, smallmouth bass were first introduced into northern New England and subsequently southwestern New Brunswick. The initial plantings were in the St. Croix River, then into nearby lakes. Exactly how they reached the Saint John River system is unknown, but once in that enormous watershed, they spread at their leisure.

Early in the 20th century, the first smallmouth were introduced into southern Nova Scotia. The species wasn’t particularly popular as long as trout and salmon remained available; and by 1949, there were only 10 lakes with confirmed populations. Since then, however, a sea change has occurred: there are now more than 200 bass waters in the province, thanks to several factors. For starters, global warming and poor forestry practices have combined to change cold-water fisheries into warm-water habitats. And as brook trout stocks dwindled in local lakes, irresponsible anglers planted smallmouth to replace them. With southern Nova Scotia featuring chains of lakes connected by rivers, planting bass in one lake inevitably led to their distribution throughout the various systems.

The Meduxnekeag River is part of the 100-kilometre-long Mactaquac Reservoir, known as the “Headpond,” which offers an extensive variety of bass habitat, such as tributary streams, flooded roadbeds and deep sandbars. On mornings early in the season, expect to catch a dozen or more bass-averaging 2 1/2 pounds-per hour in the Meduxnekeag.

Tackle & Tactics: The first weeks of the season, which opens May 1, find bass moving from the Headpond into rivers such as the Meduxnekeag to prepare for spawning. Fish the lower section of the Meduxnekeag between the Highway 2 bridge and the so-called town bridge, using medium-action spinning gear and an in-line spinner (locals prefer a green-and-chartreuse blade). These bass are aggressive, so it’s wise to use 10-pound line.

Getting There: For the Meduxnekeag, take Highway 2 west from Fredericton to Woodstock. Other areas of Mactaquac can be accessed from locations along Highway 2, such as Nackawic.

Now contiguous as part of the reservoir created by the dam at St. Croix, Palfrey and Spednic Lakes make for a superb-yet underutilized-bass fishery. Under the right conditions, you can expect daily catches of 50 fish with a 1 3/4-pound average.

Tackle & Tactics: As the bass begin moving to the spawning beds in mid-June, they aggressively attack topwater lures, particularly poppers. Toss these with medium-action spinning tackle loaded with 10-pound test. If the shoreline topwater action slows, change to a white spinnerbait, or move to the rocky reefs and cast a 2 1/4-inch crayfish-pattern crankbait. For fly flingers, a small chartreuse popper with white rubber legs attracts considerable attention. Cast this with a six-weight, floating-line outfit fronted with a 2X leader.

Getting There: Take Highway 2 west from Fredericton to exit 258. Follow Route 3 to Thomaston Corner, then take Route 4 to St. Croix.

Magaguadavic (pronounced Mac-a-day-vic) is a large lake with considerable bass-producing structure that can easily yield 25 to 35 fish a day averaging 2 1/2 pounds. Combine that with easy access, and this lake is easy to recommend.

Tackle & Tactics: Magaguadavic boasts an outstanding fall fishery. In late September and early October, work shallow structure and the shorelines with four-inch pumpkin-green tubes. As for spooling up (on a medium-action spinning outfit), one local pro offers this warning: “Drop below 10-pound if you must, but when you lose a trophy you’ll get no sympathy from me.”

Getting There: From Fredericton, take Highway 2 west to exit 258, then Route 3 to York Mills. From there, take Route 635 to Magaguadavic.

An abundant forage base has enabled Harvey Lake to produce some of New Brunswick’s largest smallmouth. Just this year, a smallie tipping the scales at 4.94 pounds was weighed in during a mid-May tournament.

Tackle & Tactics: Targeting pre-spawners in late May/early June is a prime tactic for landing one of Harvey’s big bass. Look to the shallows around the previous year’s reed beds, or rocky structure, where hatching aquatic insects draw attention from all levels of the food chain. Bring medium-action spinning gear spooled with 10-pound test for tossing six-inch plastic worms with black and blue tails. For fly fishers, a six-weight floating line and a black-and-olive Woolly Bugger or Nine-Three streamer are musts.

Getting There: From Fredericton, take Highway 2 west to exit 258, then Route 3 to the village of Harvey (the “Bass fishing capital of New Brunswick”).

The Saint John River between Oromocto and Gagetown boasts a quality smallmouth population (you can catch 40 fish a day weighing one to 1 1/2 pounds), and there’s every likelihood of hooking up with striped bass or muskie.

Tackle & Tactics: Although productive throughout the season, this area features exciting topwater action in July after the spawn. Surprisingly, a popper with a white belly and a dark back will pull smallies from structure in six to eight feet of water. Of course, working the shorelines early and late in the day is never a miss. For those wedded to soft plastics, a three-inch watermelon-green tube will do damage. Also in July, some anglers prefer to drop to lighter gear. Considering the likelihood of encountering a big striped bass, however, it would be prudent to stick to medium-action spinning gear loaded with 10-pound test.

Getting There: Follow Route 102 east from Fredericton to the town of Oromocto.

Lake Utopia has the largest and most accessible bass population in Charlotte County-a major bass-fishing region in southwestern New Brunswick. Utopia’s size can make it challenging, but find the lake’s two- to 3 1/2-pounders and it will be worth the effort.

Tackle & Tactics: For exciting topwater action, early July is the peak on Utopia. Tie a silver/black or chartreuse popper to six- or eight-pound mono and probe the shallows, particularly around reed beds or weed edges. As is true for most popper-style lures, long-pause retrieves are usually the most productive. The weeds in question aren’t thick enough to demand power removals, so a medium-action spinning combination is a comfortable selection.

Getting There: From Saint John, take Highway 1 toward the Maine border. At the Pennfield exit turn north and follow the signs to the lake.

This lake consistently produces large (up to 3 1/2 pounds) and numerous (an average of 30 fish a day) bass. It also features a dock with wheelchair access and a fully maintained boat launch.

Tackle & Tactics: July is a peak feeding period on Grand Lake. Topwaters such as shad-patterned poppers and five-inch soft-plastic jerkbaits in bass-imitating colours score in the shallows. Medium-action spinning gear loaded with eight-pound-test super-line is recommended. Those addicted to the long rod should work the same areas; tackle up with a six-weight and 2X tippet leader. Tie on Whisker Bugs (spun and clipped deer hair) in black or green.

Getting There: From Halifax, take Highway 102 toward Truro and get off at Exit 5. Follow Route 2 north to Oakfield Provincial Park.

Part of the Gaspereaux River power flowage, Black River Lake is a top producer with convenient access. An average daily catch is 25 fish, most in the one-pound range, along with several two- to three-pounders.

Tackle & Tactics: Generally, the third week of June offers the best fishing. By then, the spawn has ended and the large females are looking to eat their way back to prime condition. Sight-fish with topwater prop baits using 10-pound test and medium-action spinning gear. And if you spot a grey mass of bass eggs around emergent weeds, a popper usually attracts attention. For fly flingers, a size 6, black-and-olive Woolly Bugger is a useful subsurface choice. Otherwise, small poppers-deer hair or cork-bodied-generate spectacular takes. Wind-resistant poppers can be tough to cast; if you’re having difficulties, switch from a standard weight-forward taper to a bass-bug taper line and a six-foot, 1X leader.

Getting There: From Halifax, take Highway 101 to Exit 11 and follow the signs to White Rock, then to Black River Lake.

The LaHave River system offers the most diverse smallmouth bass fishery in the Maritimes, complete with rivers and shallow and deep lakes. The rivers consistently produce half-pound bass (and the odd two-pounder), while the lakes serve up fish twice as big. The myriad opportunities make it difficult to recommend a single spot. And for much of the season, the rivers are fly fishing only.

In July, the shallow lakes (such as New Germany Lake) are best tackled with small topwater or shallow-diving lures using light spinning gear spooled with six-pound test. In the deeper lakes, structure should be probed during the day with medium-action spinning outfits and three-inch tubes tied to eight-pound test. In the evening, switch to any of a variety of topwater lures or flies to produce the best results. Recommended fly tackle is a six-weight floating line fronted by a 3X, nine-foot leader. In the fly-only rivers, the bass respond well to deer-hair bugs or size 6 golden shiner imitations.

Getting There: Follow Highway 103 from Halifax to Bridgewater, then take Route 10 toward New Germany. River accesses are obvious, as is the boat launch into New Germany Lake-just beyond the like-named village.

Ten Mile Lake regularly produces good catches (think an average of 30 fish per day) and occasionally some of Nova Scotia’s biggest fish of the season-relative giants in the vicinity of five pounds.

Tackle & Tactics: Ten Mile fishes well in July. Find the grass flats and work a four-inch plastic stick worm (locals prefer pumpkin-green with black flakes) slowly through the shallows. To increase strikes, gear up with a medium-action baitcasting outfit spooled with 15-pound-test super-line tipped with six to eight feet of 10-pound-test fluorocarbon. Fly fishers should stick with a six-weight floating-line outfit and a 3X tippet, and tie on small chartreuse poppers and black sliders with white spots.

Getting There: Take Highway 103 from Halifax to Liverpool, then go inland on Route 8 about 25 kilometres to the boat launch.