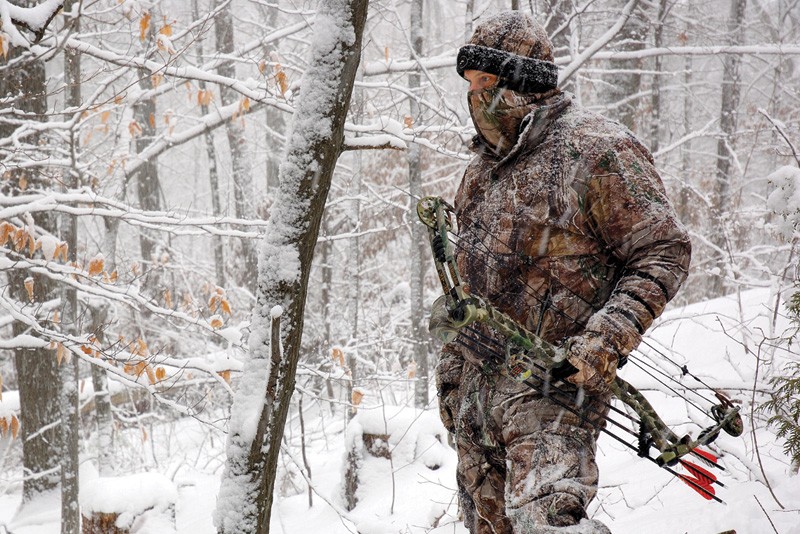 Bowhunting In the Cold

For Late-season Bucks, You'll Need to Weather the Extremes

Depending on where you live in Canada, late-season bowhunting can mean dealing with some harsh conditions. In the big woods of central Ontario where my friends and I hunt, we often have to contend with very cold temperatures and really deep snow. We’ve learned to overcome these winter obstacles, however, and now you can, too.

When you hunt in the late season, sooner or later you have to deal with extreme cold. If you’re hunting in your backyard, it’s not so much of an issue. But if you’re hunting in the back of beyond, temperature can be a major factor.

First, you should never hunt alone-too many things can go wrong. It’s important to always have a way to contact your hunting buddies, either with a cellphone or two-way radio. Besides, you’re going to need a friend or two around to help you get your big buck out.

It’s also crucial to dress properly, and that means layering. The bottom line is to avoid sweating at all costs when getting to your stand. Pace yourself-you’re not in a race. For my base layer, I use a Web Foots Body Sock from Carol Davis Sportswear.

Similar to long johns, this one-piece undergarment sports a zippered rear-flap and a two-way front zipper. The fleece material wicks away moisture very well, and it’s antimicrobial to help control your scent.

For my second layer, I usually wear a heavy fleece, followed by an insulated hooded jacket to keep snow from creeping down the back of my neck. Opt for brushed cotton for this outer layer, as it’s very warm and very quiet.

For pants, I use insulated, waterproof bib overalls with a reinforced rear. Avoid high-tech clothing because it gets noisier as the temperature drops. The rustle of fabric when you’re coming to full draw on a bitter cold still day can make a buck come unglued at 20 metres.

You’ll also want to invest in the best winter boots you can afford, as well as a good cold-weather hat and balaclava. While waiting on the stand, use a hand muff and stuff it with pocket warmers so you can keep your hands at the ready.

Now, what do you do if you still get cold in the middle of an all-day sit? Even though it’s contrary to how most deer hunters think, I say get down out of your stand and go for a short walk to warm up. If you spook a deer moving through your area, so be it. There will be plenty more to follow, and they won’t have a clue you were ever out of your stand.

Since my hunting buddies and I hunt migrating whitetails in wilderness settings up to six kilometres from the nearest plowed road, we need snowmobiles and/or ATVs with tracks to get through the deep snow to our hunting areas. Not only do they enable us to access more remote and productive areas, but the trails we create serve as highways for the migrating deer, funnelling them right by our stands.

We also bring snowshoes and large plastic toboggans. Seldom will a mature buck follow an established trail after he’s shot. Instead, he’ll typically head where we can’t take our machines-downhill or into the nastiest cover available, of which there is plenty in the old clear-cuts we hunt. Wading through more than a metre of snow is not my idea of fun, especially when I’m dragging a mature buck, so my buddies and I break trail with the snowshoes and drag the deer out on a toboggan until we can reach it with a snowmobile or ATV.

This might sound like a lot of work, but believe me, late-season deer hunting is just too good to not put in the effort.

If you get to your stand and find a foot of snow piled on the platform, be sure to completely remove it before you sit down. Otherwise, the snow will get packed down and freeze-and every move you make will create unwanted noise.