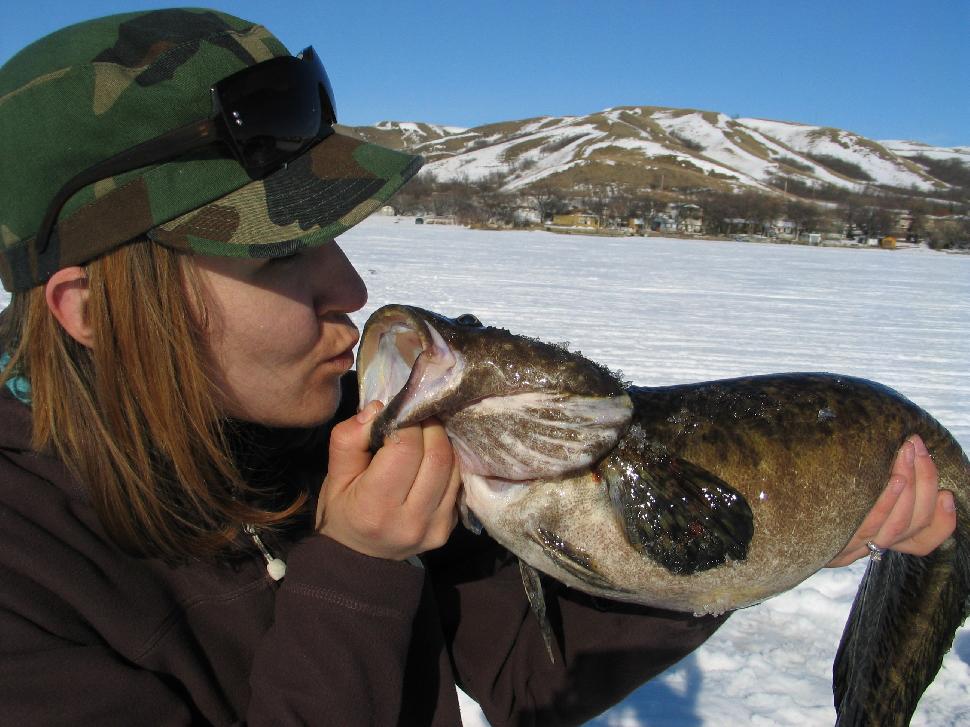 Wayne Gretzky may be the Great One, as far as hockey is concerned, but Saskatchewan-based fishing buddy, Jeff Matity is the king when it comes to catching burbot (a.k.a. ling and eelpout) through a hole in the ice.

As a matter of fact, Matity, who has a background in freshwater biology, is passionate about the plentiful, big, tasty, freshwater cod found across the country.

Several readers have emailed over the past few weeks with ice fishing questions about burbot, and while I’ve caught my fair share of the interesting looking critters over the years, like most ice anglers the majority have been bonus, “accidental” catches while ice fishing for walleye or lake trout.

So, to learn how to consistently target burbot I went straight to the expert, and in the process, got a whole lot more than I bargained for.

Gord: What is it about burbot that you find so fascinating?

Jeff: Why burbot? Why not?  Big fish and lots of ‘em; in a species with tremendous character and life history. And they bite like crazy during the doldrums of February—a time when most other species get lock-jaw. Burbot are also great eating! They’ve been marketed for decades as “cod” for traditional fish-n-chips. They are as fine as any freshwater fish on the table.

Gord: For anglers wanting to target burbot in the winter, what specifically do you look for? What constitutes an ideal winter burbot ice fishing location?

At first ice, it is, in fact, the fall ciscoe spawn/post-spawn dispersal that offers burbot the chance to feed on ciscoes, their eggs, and the scavengers that also share the bounty, namely, suckers, shiners minnows, crawfish and perch.

The best locations are deep, rocky, main lake points, as well as the first major drop-offs near current areas (often dangerous at this time of year; so, beware).

Your best burbot bites will come out of the deepest holes where, often, first-ice walleye are also contacted. The burbot usually start to bite after the walleye quit for the night. However, tip-ups will produce daytime burbot if you set them just beyond the deepest holes.

Mid-winter finds burbot widely distributed throughout the lake basin making harder to pattern. Still, two solid patterns for this period are deep rock structures and current areas. Fish these spots early and late in the day—as well as at night—to find their travel routes and the “spot-on-the-spot” features. And by all means, once you find these areas, use your GPS to mark them well, because they will produce for you year after year.

The late-ice period finds groups of burbot in all three stages of the spawn. As you know, burbot are one of the very few fish that spawn under the ice in the winter. The fish will be using shallow main-lake rock and gravel flats, in close association with deep-water foraging areas.

On a lake map, I look for the biggest main lake feeding flats that jut out into the deepest part of the lake. The edge where the shallows give way to a steep drop off is the area to camp on. An individual fish will make several spawning/feeding forays before she is completely spent so close proximity to shallow spawning grounds and deep water crayfish snacks is vital.

Gord: As you say, Jeff, unlike every other species of fish, burbot spawn under the ice in the middle of the winter. Does this imply that anglers need to be looking for and fishing around key spawning areas? And if so, what constitutes ideal burbot spawning grounds?

As I mentioned, ciscoe spawning locations are where you first find active burbot in November and December. By mid-winter, areas of current, typical spring spawning areas for walleye, shiners and many other fish draw active groups of burbot that feed on the abundant winter aggregations of baitfish and crustaceans.

Finally, after the first windy-thaw in February, large main lake bars and shoals comprised of rock, gravel and coarse sand are the final locations for burbot for the remainder of the ice fishing season.  These are the spawning areas that anglers need to look for.  The spawn can occur from February through April and it is where the best bite develops, peaks and finally winds down.

Once you locate a general spawning flat, you need to make an extra effort to find the edges of the flat where the cups and steeper drop-offs occur.  These are the daily travel lanes for spawning fish and, therefore, areas where groups of fish concentrate and where you can intercept the largest ones.

Gord: Most anglers, myself included, have caught burbot through the ice, by accident, while we’ve been fishing for walleye and / or lake trout.  And usually, we’ve have hooked the fish in the late afternoon and early evening hours.  This suggests that burbot are twilight feeders, and yet, you often target them in the middle of the day.  What major adjustments do anglers need to make to catch burbot during day light hours?

Twilight and after dark are the norm for burbot angling throughout the early ice fishing period, up until they begin their “house cleaning” chores at their spawning locations.

Anglers can catch more daytime burbot—and bigger walleye too, for that matter—by fishing with heavy jigs and pounding them into the bottom to attract their attention.  When burbot set up on shallow spawning shoals in early February, they go on a rampage and literally eat the cupboards bare.  Fishing in ice tents on these shoals allows anglers to watch the fish coming in and mauling baits.  It is super fun to see. The daytime bite lasts throughout the rest of the ice fishing season as separate groups of individuals perform sentry duty against marauding ciscoes, perch, and shiners.

Gord: Wow, that is so cool, Jeff. Let’s regroup in a week’s time and talk about how you specifically ice fish for burbot in the winter, as well as some of your favourite lures and presentations.

Jeff: I am looking forward to it, Gord! I am sure that is what most readers find interesting. Still, you have to locate them before you catch them.