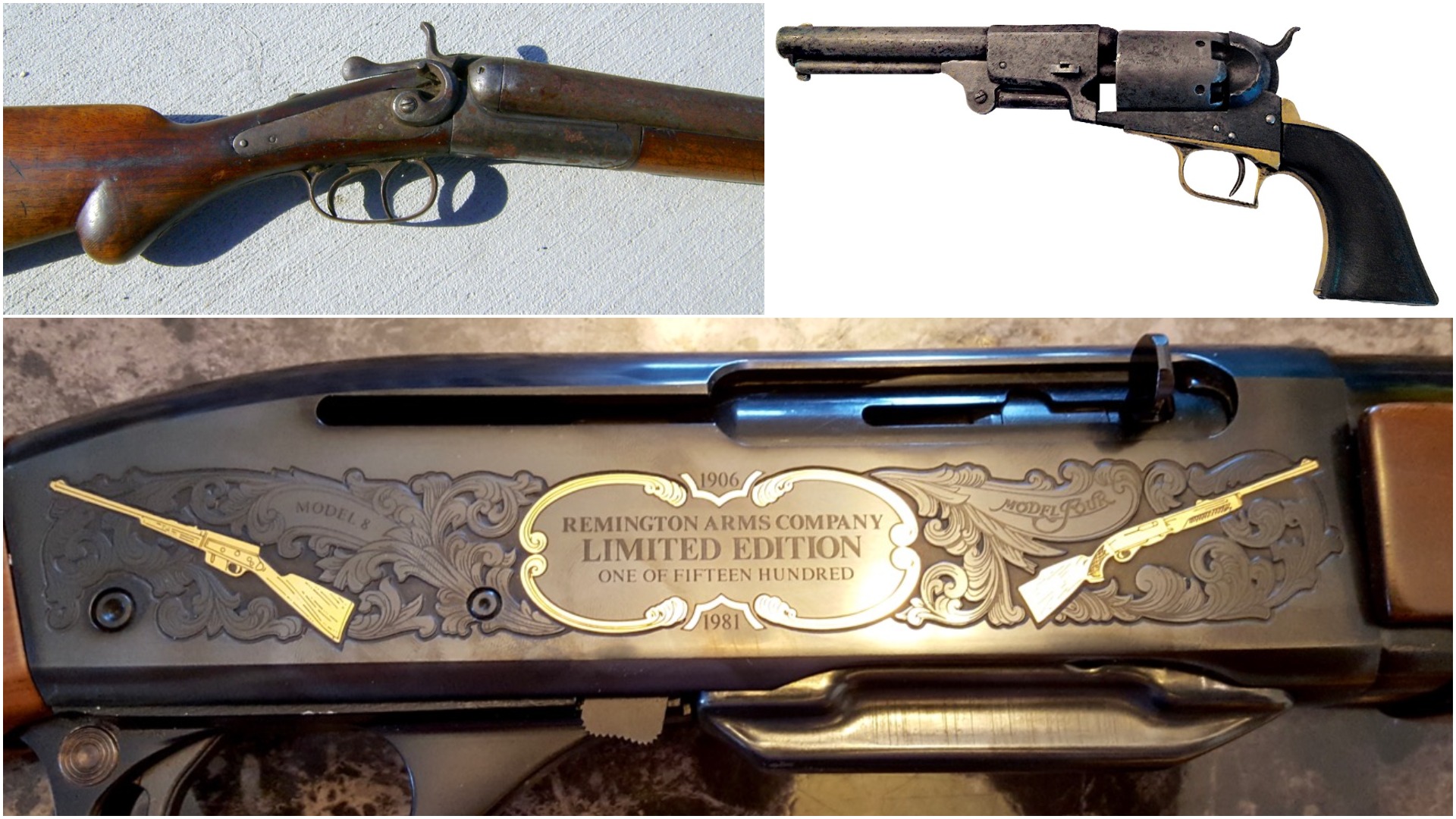 We recently gave my wife’s son an old inoperable shotgun (above, top) that belonged to his great-grandfather. We don’t think it has any monetary value, but it does have sentimental value to us as a family keepsake. We are now curious about its make and age, and would really appreciate any information you may be able to provide.

The crown over the oval containing the letters ELG (below) is the definitive black powder proof mark, indicating the gun was proved at the proof house in Liege, Belgium. The 12C means your gun is a 12-gauge with a choke barrel, and the number 18.2 is the bore diameter in millimetres. The asterisk over the letter M is the mark of the individual who actually did the proving, while the intertwined EL is the provisional proof mark. 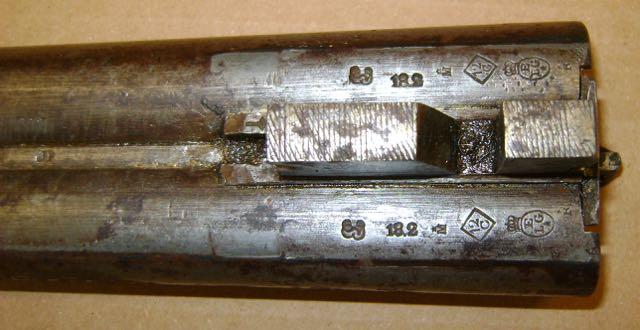 A great many inexpensive double shotguns were made in Belgium for export from around the middle of the19th century up to the First World War. It was largely a cottage industry, with small shops making individual parts. Once assembled, the completed shotguns could be stamped with whatever mark the buyer wanted, such as the name of a hardware store or sporting goods store.

It’s impossible to say exactly when your shotgun was made, but we can narrow it down. The inclusion of just one decimal place in the bore diameter (18.2 in this case) went into use in 1894; before that, the diameter was indicated with two decimal places. Also, internal hammer models were replacing external hammer guns during the 1890s, so it’s most likely this shotgun was made between 1894 and 1910. As you suspected, these old Belgian shotguns don’t have a lot of value, even if they’re in good condition. You’re quite right, however, that it’s worth keeping for its sentimental value and as an artifact of a long gone era.

Do you have an idea as to the worth of this First Model Colt Dragoon (above)? Based on the serial numbers, I am under the impression that all the components are original. I have other collectible guns, including additional Colts that were handed down to me. I’m not sure where to get them properly appraised, however, so any help would be appreciated.

Yes, this appears to be an original First Model Colt Dragoon. The revolver has the correct oval cylinder notches for a First Model, the serial number is in the right range and the barrel and frame markings are also correct. I’ve seen several photos of First Models with two digits of the serial number stamped on each side of the front frame screw. There are other original First Models, however, with all four digits stamped beneath the frame screw, as is the case with yours. The letters on the left side of the frame, meanwhile, indicate this gun was made for the U.S. military.

Colt Dragoons are some of the most highly valued and collectible firearms. Among Colt handguns, only the Walker and some Paterson models are more highly valued by collectors. I like to see good collectible guns stay in Canada, but the reality is, this gun would bring a higher price at a U.S. auction. There are far more wealthy U.S. collectors, and the Dragoon is associated with pre-American Civil War history and the opening of the West.

I can’t provide much more than an educated guess as to what your revolver would bring at auction. Dragoons in near mint condition have been known to bring prices of $125,000 and up at U.S. auctions, while even those with zero to 10 per cent of the original finish can fetch $10,000 or more. Your revolver has a lot of surface rust and pitting, and I can’t see any traces of the ranger versus Native American fight scene that would have been engraved on the cylinder. On the plus side, all the components appear to be original, and most of the screw slots are in good shape. Even with the rust and pitting, your revolver is certainly a valuable collectible.

I have a diamond anniversary edition Remington Model Four (above). The rifle appears to be unfired, but I don’t have the original box. I’m wondering if it would be of any value to a Remington collector, or if I should just use it as a hunting rifle.

Your rifle would be of interest to Remington collectors, and I think you would be wise to keep it in pristine condition and unfired. Or, if you don’t want it, I recommend selling it and buying a hunting rifle you like. That said, it’s your property to do with as you please, so if you want to hunt with it, go ahead—you don’t need to explain your decision to anyone!

These rifles tend to be worth about double what a regular Model Four in similar condition would be. They were made from 1982 to 1988, all in the same grade and all chambered for the .30-06 cartridge. At a firearms auction, I’d say your rifle would go for about $1,000, plus or minus $200 or so. 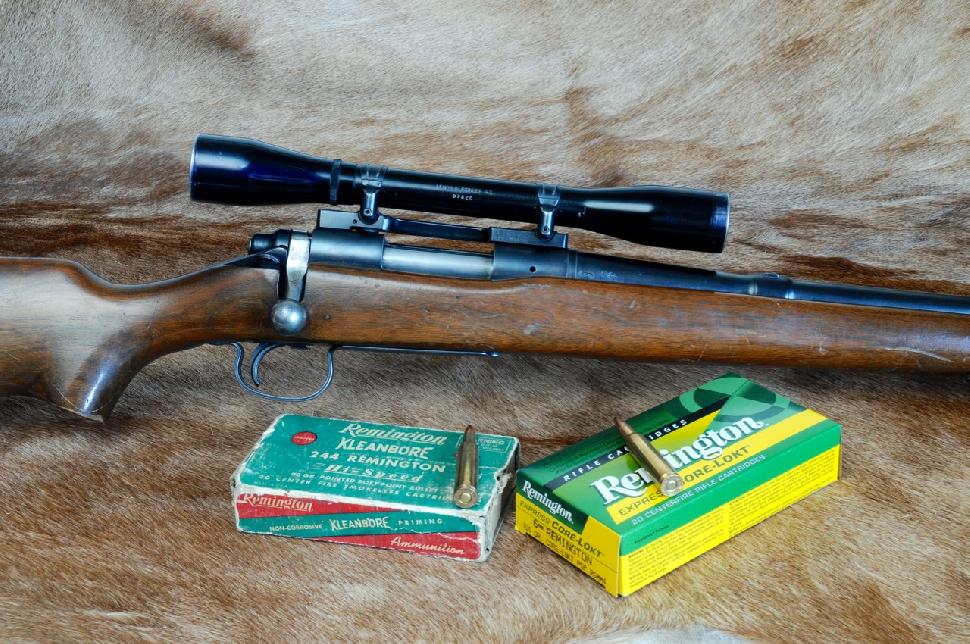 When Remington resumed production of sporting rifles and shotguns after the Second World War, it also began designing its firearms so they could be produced faster and at a lower cost. The long-action Model 721 and short-action Model 722, for example, were designed such that much of the manufacturing could be done on lathes.

With their simple design and plain, uncheckered walnut stocks, these models were considered economy rifles, but shooters soon discovered they were also reliable and extremely accurate by the standards of the era. The rifle shown here is a Model 722A in .244 Rem., a cartridge later renamed the 6mm Rem.

The rifle pictured here would likely be currently worth between $500 and $750 to collectors needing a .244 to complete their collection. The Leupold Pioneer 4X scope, with its 7/8-inch tube diameter and adjustments to the Leupold base, adds perhaps another $100 to the value.