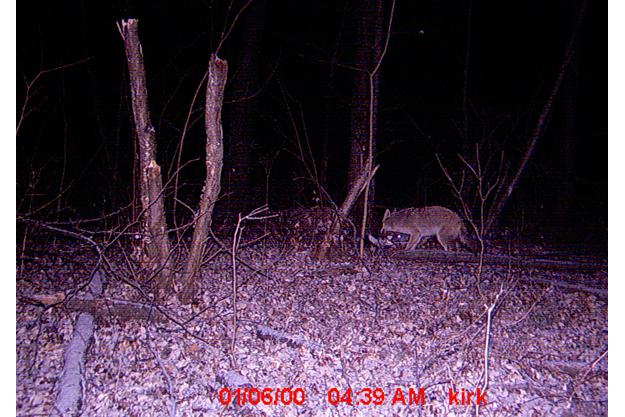 In December 2012, Outdoor Canada reader Kirk McCann of Sheenboro, Quebec, captured some fascinating pictures on a trailcam. “It’s hard to make out, but they show either wolves or coyotes taking down a deer. They’re really clamping their jaws down on something, and if you look closely, you can see the outline of the animal’s ears,” McCann wrote. Click through the gallery to see more of his photos, along with comments from McCann and a biologist from Quebec’s Ministry of Natural Resources and Wildlife.

“Whether they are coyotes or some kind of hybrid, they definitely have the ability to take down young deer,” McCann said. “Our hunts have been less successful in recent years, and it makes me wonder if the coyotes are beating us to the punch.”

McCann said these photos were taken on December 11 or 12, 2012. From the elapsed time in the following shots, you can see how long it took the dogs to devour their prey.

Dalpé-Charron said that due to the degree of hybridization among coyotes, wolves and even domestic dogs, especially in Quebec’s southern region, it’s impossible to definitively identify the animals with only photographs. To be 100 per cent certain requires a genetic analysis of blood or flesh or exact skull measurements. However he did make an educated guess…

“After carefully examining your pictures, they look to be a pack of coyotes (canis latrans), but some individuals could have canid hybridization genes from the eastern wolf (canis lupus lycaon), recently or not. Both species share a phylogenic gene pool from North America, instead of Eurasia where the grey northern wolf (canis lupus labradorius) comes from,” said Dalpé-Charron.

“We know that coyotes form packs that can successfully hunt deer under certain circumstances of high density. Additionally, adult coyotes in Québec are frequently bigger than coyotes found in western Canada,” said Dalpé-Charron.

Two days later, the kill site is covered with snow, and a coyote—one of the pack or perhaps a solo scavenger— noses around for frozen leftovers. Have you captured something cool on your trailcam? Email your shots to us at webmaster@outdoorcanada.ca and we may use them in a future installment of Caught on Film.