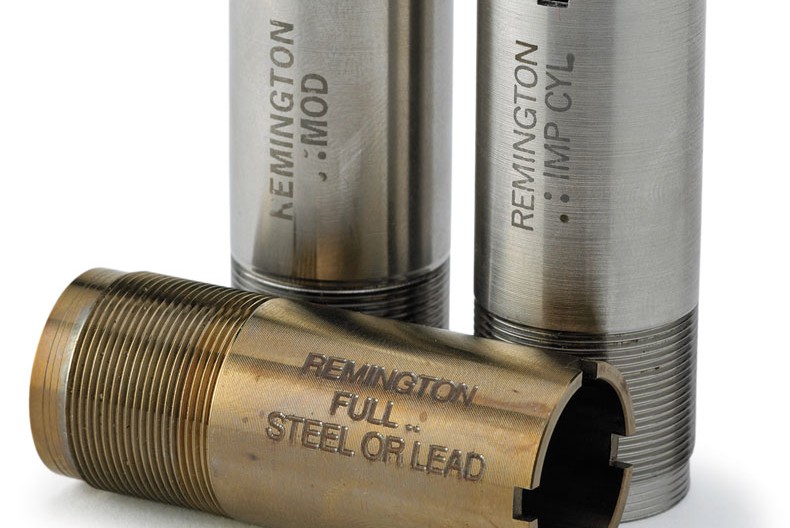 Choke is an under-appreciated but critical component in your shotgun success. Defined in the simplest terms, choke is a constriction at the muzzle end of a shotgun barrel. Its basic function is to squeeze the shot charge together as it leaves the barrel, resulting in tighter downrange patterns and, subsequently, increased effective range. The appropriate choke for any given situation should reflect the species involved and the expected shooting distance.

The three most common chokes are full, modified and improved cylinder. There are, in fact, many other choke options in fixed or variable-choke shotguns, including cylinder, skeet, improved modified and extra full, to name just a few. There was a time when shooters knew the exact implications of any and all of these chokes on their downrange patterns, but those times have disappeared. One of the primary culprits is the increasing differences in shotgun barrel diameters among the various gun makers.

To illustrate this, it’s important that we first refine our definition of choke slightly to refer to the difference between the barrel diameter and the muzzle diameter. A full choke, for example, is a constriction of .035 inches. Historically, 12-gauge shotguns all had an inside barrel diameter, or bore, of .729 inches, so a full choke reduced the diameter at the muzzle to .694 inches. Simple, right? Well, it was.

Today, inside barrel diameters are less consistent from manufacturer to manufacturer, ranging from about .722 inches to more than .745 inches. Take a .740 bore shotgun, for example. Insert a full choke and the muzzle diameter changes to .705 inches. Now imagine an improved modified choke (.025 constriction) in the traditional .729 bore. That would give you a muzzle diameter of .704 inches. And in a shotgun with a bore of .722, a modified choke (.020 constriction) would result in a muzzle diameter of .702 inches. All other variables being equal, in all three examples the downrange patterns would be nearly identical, despite the fact that three different chokes were employed.

This means shotgunners cannot automatically assume that any given choke in one shotgun will offer patterns identical to the same choke in another shotgun. As well-known shotgunning writer John Taylor once said, “It used to be that if a dime fit snugly into the muzzle of a 12-gauge shotgun, you knew you had a full choke. Today, all it tells you is that you have a shotgun and 10 cents.”

This variability in patterning is further exacerbated when shooting steel, as the harder pellets don’t react as predictably as lead when forced through a choke. Steel does, however, tend to produce tighter patterns on average than lead. Thus, it’s often been said that the simple solution when shooting steel is to move down a choke to replicate patterns from the days of lead. In other words, steel with a modified choke will pattern similarly to lead with a full choke. While this is a reasonable rule of thumb when shooting steel shot in No. 2 or larger, the differences are not as great when shooting smaller shot sizes, and hunters should consider similar chokes to what they used with lead.

The real answer lies in patterning your shotgun using the ammunition you shoot in the field-there are simply no reliable shortcuts any more. Looking back to the days of lead, a full choke was often described as the one that would deliver 70 per cent of the pellets within a 30-inch circle at 40 yards. But today, with so many different shotshells and barrel diameters out there, hunters looking to truly understand what they can expect in downrange patterns should spend time each season shooting at paper using a variety of chokes.

With traditional choke designations having increasingly less value in today’s smoothbore world, then, successful shotgunners are the ones who do their homework before heading afield.

It’s important to keep the threads on both the choke tube and the barrel clean when using a variable-choke shotgun. They can be easily damaged when changing chokes if they’re clogged with dirt or rust. Also, regularly check that your tube is screwed in finger tight, as it can work its way loose in the field.