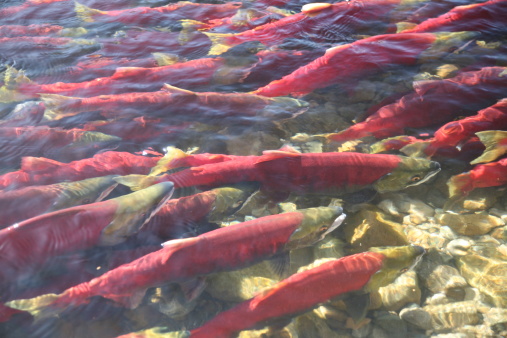 Sockeye Salmon in the Adams River near Chase, B.C.
News

While the commission looking into the decline of sockeye salmon in the Fraser River in B.C. was not able to find a “smoking gun,” its lead author, Justice Bruce Cohen, pointed the finger at a few factors in his long awaited report, which was submitted to the federal government on Monday.

At a news conference yesterday, Cohen cited a combination of contamination and development along the river, habitat loss, conditions faced by juvenile salmon at sea, and most of all, climate change.

“I cannot think of a greater threat to sockeye than climate change,” Cohen told reporters. He noted a two-degree increase in water temperatures in the river over the past 60 years. The final report questioned the logic behind Canada’s withdrawal from the international Kyoto Protocol to reduce greenhouse gas emissions.

And Cohen’s criticism of the federal government’s actions didn’t end there. He said he was “troubled” by recent amendments to the environmental process and the Fisheries Act by Prime Minister Stephen Harper’s Conservative government.

“However, the recent amendments to the Fisheries Act appear to be taking the DFO in a very different direction.”

“As long as DFO has a mandate to promote salmon farming, there is a risk that it will act in a manner that favours the interests of the salmon farming industry over the health of wild fish stocks,” he said.

The Commissioner concluded that salmon farms along the sockeye migration route in the Discovery Islands have the potential to introduce exotic diseases and to aggravate endemic diseases, which can have a negative impact on Fraser River sockeye. “Mitigation measures should not be delayed in the absence of scientific certainty,” he said.

For that reason, Cohen recommended a freeze on net-pen salmon farm production in the Discovery Islands until September 30, 2020.

Under the Terms of Reference for the Cohen Commission, which was established on November 5, 2009, the Commissioner was charged to investigate and report on the decline of sockeye salmon in the Fraser River and make recommendations for improving the future sustainability of the fishery. This report comes after 179 witnesses testifying at 138 days of hearings, 2,145 exhibits, 892 public submissions, and is the culmination of the commission’s work.

The report makes 75 recommendations to improve the future sustainability of the fishery.

To see the full report, go to www.cohencommission.ca.