People have been using Coca Cola for years, for just about everything you can imagine, including removing the rust from tools, removing stubborn stains in the wash, and cleaning the streaks and haze off of your car windshield. It really does work, too, although you have to be careful because the acid also eats away at the rubber on your windshield wipers.

Now, there is a new Coke trick on the block that has anglers buzzing: You can use the bubbly soda to save a fish’s life. In particular, a walleye, bass, trout or salmon that you’ve hooked deeply and is bleeding badly from the gills.

I am not sure who was the first angler to do it or what inspired someone to pour a can of Coke down a fish’s throat. But the fact of the matter is, it works.

In fact, it cauterizes the wound almost instantly and stops the bleeding so quickly that many anglers are now debating the relative merits of Coke, Mountain Dew and Pepsi. 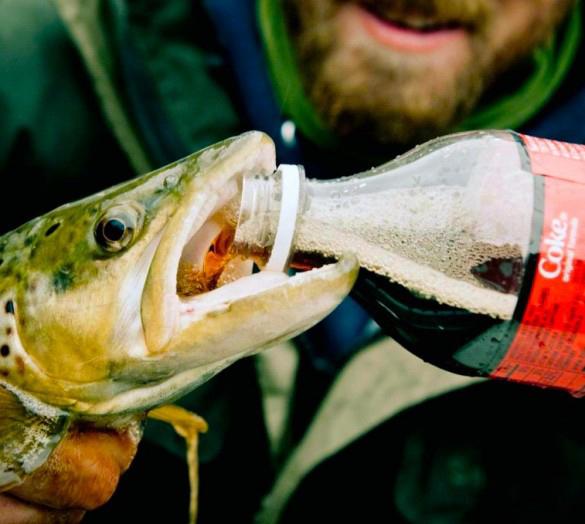 As it turns out, however, it is not the specific brand of soda that matters most but rather the carbonization that is in it.

To get to the heart of the matter, I contacted my good friend, Dr. Bruce Tufts, who is a professor at Queen’s University in Kingston, and specializes in fish physiology. By the way, Bruce is also the person who documented the destructive and damaging effects of weighing in bass and walleyes at tournaments “in air.”  This led to the much more fish-friendly Shimano Water Weigh-In System, which has saved the lives of thousands of bass.

When I asked Bruce why Coca-Cola, or similar sodas seemingly work their magic and stop the bleeding of a fish, he said, “I’ve discussed this with my physiology colleagues and we’re pretty confident we can explain it. Carbon dioxide causes the blood vessels in the gills to constrict. Some things causes vasodilatation, some cause  vasoconstriction. So the carbonation in pop causes the gills to vasoconstrict and stop bleeding.  It is a pretty cool scientific explanation.”

Just as cool, Bruce added, is that he believes anglers might get the same effect as Coke, “if they threw something like Tums in the livewell water that would increase the bicarbonate and then also raise carbon dioxide.  It’s a physiologist’s playground!”

So, there you have it folks.  As well as carrying pliers, forceps, rulers and scales in your boat, you might want to add a bottle of  Tums and several small cans of soda water from the grocery store, which contain nothing more than pure water infused with carbon dioxide.

Who would have thought, that when it comes to fish care, Coke really is, “the real thing!”