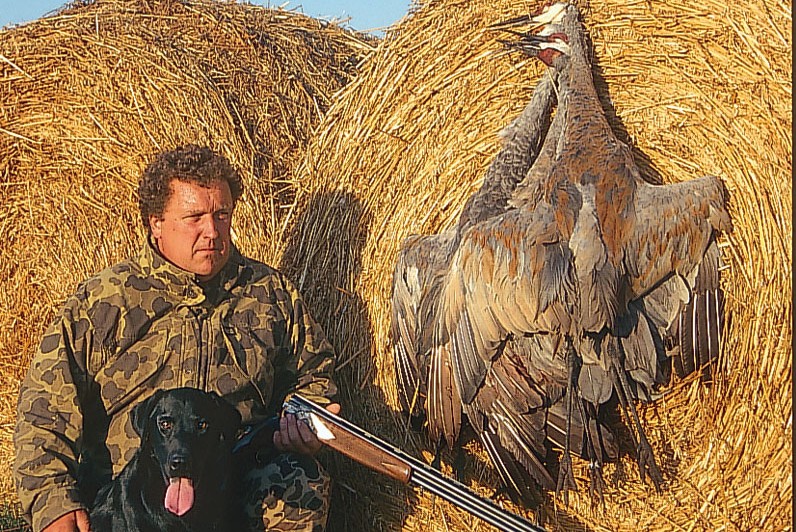 Looking for a unique Canuck hunt? Give sandhill cranes a try

If you ever take to the field to hunt sandhill cranes, chances are you’ll make it an annual affair. I was first introduced to hunting “storks”—as they’re informally known—by Pat Kehoe, a waterfowl biologist and avid outdoorsman. Kehoe has pursued these ungainly birds, which can grow as tall as four feet, for decades, trekking annually to central Saskatchewan.

One of the oldest species of bird—its genealogy stretches back 2.5 million years—the sandhill crane is classified into six subspecies with nine distinct populations. The mid-continent population, which nests west of Hudson and James Bays (and into Alaska and eastern Siberia), offers hunting opportunities in Saskatchewan and Manitoba as the birds migrate to their wintering grounds in Texas, New Mexico and Mexico.

The two basic techniques used to hunt sandhills, pass shooting and decoying, are similar to the tactics used to hunt Canada geese. Like geese, cranes prefer to roost on large bodies of water, making morning and evening trips to nearby agricultural fields to feed on waste grain. Spotting these distinctive fliers as they travel between roosting and feeding sites allows hunters to set up along their travel corridors. If the distance between feeding and roosting sites is relatively short, cranes have a tendency to fly rather low, so setting up along fencelines, hedgerows, treelines or behind hay bales can yield successful pass-shooting opportunities.

It’s important to be well concealed when pass shooting cranes, as they’ll veer off path if anything’s amiss. Successful pass shooters have also learned the importance of being mobile, since cranes will often alter their feeding routes with little warning. More than once I’ve had to hotfoot it a kilometre or so to get myself under cranes that had changed flight plans.

Decoying cranes is also similar to the tactics used for geese. In fact, many hunters use goose decoys painted grey and perched atop two-foot-tall stakes. Others use handmade silhouette-style decoys. Either way, decoys are arranged in family clusters of three or four birds, and hunters hide in pits, willow blinds, coffin blinds or the like. Calling can be an asset when decoying cranes, but there are few commercial calls on the market, and veteran hunters have learned to mimic the peculiar, drawn out, vibrating crane call-either with their own voices or by modifying other barrel calls.

Despite their immense height, sandhills are no heavier than large Canadas, meaning a 12-gauge shotgun with a heavy load of BBs or No. 2s will get the job done. Preferred chokes include improved cylinder or modified for decoying birds, and modified or tighter for pass shooting.

The size of these birds can easily fool a hunter into thinking they’re closer than they really are, so wait a few seconds longer than you would for geese in a similar scenario before pulling the trigger. As well, concentrate on leading the head and neck of the bird, not the body, to ensure cleaner kills and less meat damage. If you do wound a sandhill, be careful about sending a dog in on them. Rather than running for cover as geese do, cranes tend to stand and face their adversaries head on, and their sharp, powerful beaks can seriously injure a retriever.

Sandhill cranes are fine table birds, with juvenile cranes certainly being the equals of Canada geese. For that reason, experienced hunters select younger birds-those with irregular mottling of brownish red and without a red crown-rather than the all-grey, scarlet-capped adults.

I’ve developed a profound respect and admiration for sandhill cranes as a challenging species to hunt. And while successful stork hunting is little different from duck or goose hunting-in that it requires both perseverance and attention to detail-the bird itself makes for a hunt like no other in Canada.

Flight pattern: Sandhills fly in a straight line or V formation. They have a laboured, steady wing beat, with a slow downstroke and rapid upstroke.

Song: A loud, trumpet-like garoo-oo-a-a-a-a, which can carry more than a kilometre.