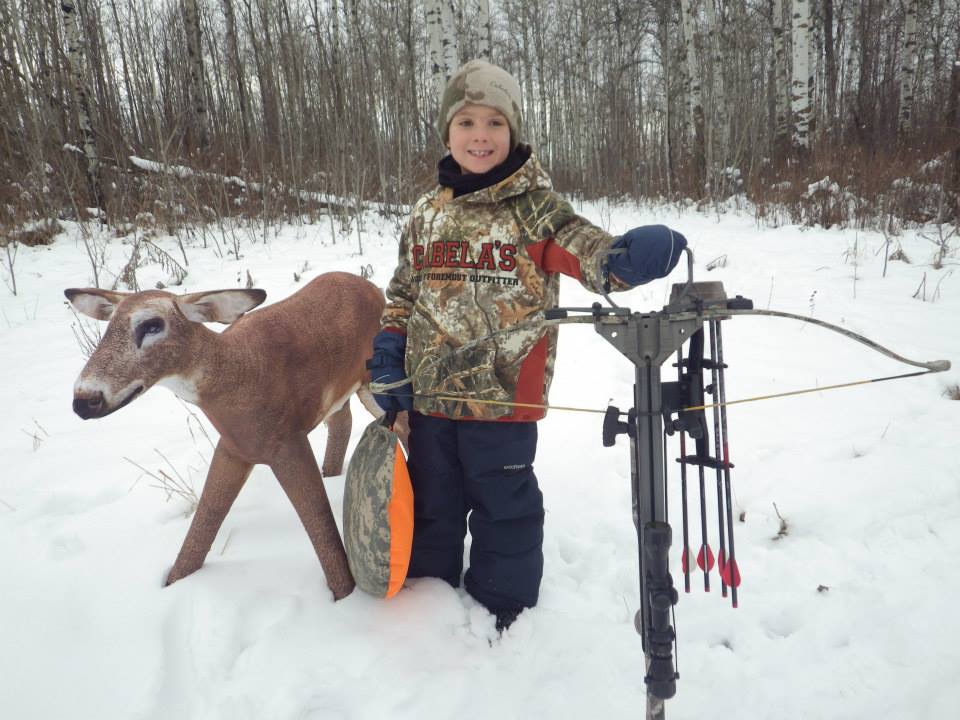 It’s a gun. No, it’s a bow. No wait, it’s something in between… A cross-gun! I mean, a crossbow. They feel more like a gun than a bow when you shoot them, but they are called crossbows. However, their range is more like that of a vertical bow than a rifle and they shoot arrows, not bullets. The term bolts has also been adapted by the crossbow hunting industry, even though a crossbow bolt from the medieval times did not have fletching, and today’s crossbow projectiles do, making them more like short arrows instead of bolts. But don’t expect to walk into your local hunting store and ask for half-a-dozen short arrows – stick with asking for bolts.

Besides the terminology being a little bit awkward, so is carrying a crossbow in the bush. For short jaunts into a tree stand or blind it’s no problem, but to still-hunt through the woods quietly takes a lot of practice.

Take the simple and expected task of walking quietly under some low-lying branches along a game trail while hunting. With a gun, you’d simply hold the gun at its centre balancing point along your side and push through quietly, protecting the gun and minimizing noise. With a vertical bow, you’d likely use your body as a plow and have your bow in tow with your dominant hand. The crossbow, however, with the bow part mounted perpendicular to the stock, makes this task a little more difficult. It can be done; it’s just an awkward weapon to haul around the bush. These days, crossbow manufacturers are making small, compact compound crossbows that are helping to deal with this issue.

I’ll get to walking through the woods in future posts. However, this month I’d like to cover the basic anatomy of a crossbow, to help level things for everyone learning about these deadly weapons. Below I’ve listed and explained the common parts that make up a crossbow, along with some crucial components, accessories and actions associated with crossbows.

Stock: As with hunting rifles, the stock is the piece that nearly every component attaches to and the part that shooters handle the most. The back-end of the crossbow is held against the shooter’s shoulder (just like a long-barrel rifle), while the trigger mechanism is conveniently located on the bottom side. The top of the stock supports the arrow track and sight.

Stirrup: This is a sturdy metal ring fastened to the stock tip, to put one’s foot through to securely lock the crossbow in place before cocking the crossbow (known as spanning.)

Riser: As with a vertical bow, the limbs are mounted on each end of the riser, making it the middle part of the bow. However, instead of a handle to grab (like with vertical bows) the riser is attached perpendicular to the stock. Typically constructed of machined (higher quality) or cast aluminum.

Limb(s): The limbs harness kinetic energy when the bow is drawn. These are what give the crossbow speed – not the string. Limbs vary in style, material and weight, all providing different applications for each shooter’s intended set up. Crossbows have a limb fastened at each end of the riser.

Cam: Cams are only found on compound crossbows. The cam is a mechanical efficiency component that helps transfer energy into the limbs with greater ease.

String: Connected to the end of each limb and sliding up/down the arrow track on top of the stock, the string is pulled on to load the crossbow. It transfers stored kinetic energy form the limbs to the arrow when the trigger is squeezed.

Trigger: A mechanism that, when squeezed, releases the string and launches the arrow. Crossbows have a safety mechanism as well, to prevent premature, unsafe deployments.

Arrow Track: Also called flight track or bolt channel, it is a groove the arrow rests on and travels down when the crossbow is fired. Since this guides and directs the arrow, higher precision construction means a more accurate arrow in flight.

Sight: Mounted to the top of the stock (as with rifle), the sights are used to aim. Common sights are red dots, optimal crosshairs and plain, yet durable, iron.

Rail Lube: A necessary lubrication applied to the arrow track to maintain the crossbow. Since the arrows are pushed down the track by the string, friction occurs.

Draw Weight: The amount of pull (measured in pounds) required to flex the limbs into the energized position. Generally, more draw weight means a faster-travelling arrow.

Power Stroke: The distance (in inches) the string travels from its at-rest to cocked position. The longer the power stroke, the more distance that is available to accelerate the arrow and thus creating a faster-flying arrow.

Spanning: The act of loading a crossbow from a harmless state into energized state.

These days, manufacturers are producing crossbows for all levels and styles of hunting. I’ll be hunting with a Mission MBX-400 – a compact crossbow capable of shooting arrows at over 400 feet per second. All manufacturer websites list specifications for their crossbows using the terms above. Go browse them and find one that’s right for you. Having knowledge of crossbow anatomy will surely help you understand and narrow down the right crossbow for you.