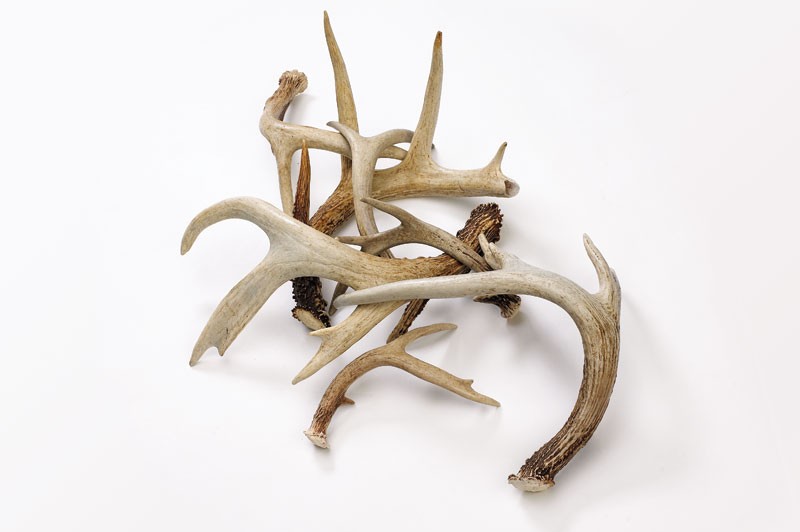 Trophies marvelled for their size and beauty. How and why deer grow antlers

I’d wandered through the 15-acre patch of poplars many a time over the course of several seasons, and prided myself on recognizing just about every deer living there. Through the summer and early fall, does with their fawns, as well as a few immature spikes, fed along the edge, and bucks would come visiting in early November, dashing across the windblown grain stubble under the cover of darkness.

Though I’d taken a few respectable bucks out of the patch, none were remotely close to that magic 170-inch mark of a trophy animal. Based on my sightings, I doubted that such a deer had ever even stepped foot in the island of poplars.

Nevertheless, one spring there it was, half covered in the snow under the warming March sun. Slightly off-white in colour, the burr, curving main beam and brow tine were instantly recognizable. After brushing off the granular snow, I knew right away that the antler had fallen from a trophy-class buck. I also knew, to my chagrin, that this same buck had probably watched me poke around through the poplars during the fall.

As far as whitetail antlers go, this one was perfect, with a heavy main beam that curved gracefully out, around and slightly back in. The tines were long enough to easily rack up the points on a score sheet. Add the circumferences and assume that the other side of the rack was a mirror image, and the tally could easily have hit 170 inches of antler.

That buck must have been a majestic and formidable animal during the peak of the rut, a deer perfectly moulded by genetics and vitality. What struck me most as I stood there admiring the perfection of the antler, though, was the realization that its owner had most likely already started pushing out a new crown—and perhaps one with even more mass.

Most bucks drop their antlers sometime between January and March, and about two weeks later, a new set begins to grow. Antlers start out as fuzzy membranes covering the pedicels, those two bony protrusions from the skull just in front of the ears. Under this skin grows a unique tissue resembling cartilage, honeycombed with blood vessels that pour in sodium and calcium, as well as phosphorus and sulphur, in dosages carefully monitored by the animal’s light-sensitive pineal gland.

What about antlered does? The anomaly occurs more often than we think. The rule of thumb is that one in 1,000 does sprouts antlers, but a 1985 study in Alberta revealed that one in 64 does is antlered. For the most part, antlers on does are spikes or small forks, usually covered in velvet, although hard, polished antlers have been seen on does. The cause is generally thought to be an excess of testosterone brought on by the likes of a hormone imbalance or problems with the ovaries or adrenal glands. In some cases, the does have actually been found to have both female and male sex organs.

Throughout April, linear growth of each antler is barely half an inch, and double that in May. In concert with the increasing abundance of prime browse, antler growth then accelerates to around three inches in June, and through July, linear growth peaks at an incredible one foot, or just under half an inch a day.

As summer days become noticeably shorter, growth declines to barely three inches and, by mid-August, the pineal gland gradually chokes off the supply of blood. Over the next few weeks, the fuzzy skin, or velvet covering, cools, and the spongy antler beneath hardens. By the beginning of September, the velvet splits and sloughs off in ragged, bloody strips, a process hastened when the buck blissfully combs its rack through resilient brush.

In mid-September, almost all bucks are out of velvet and, depending on the vegetation in the area, the magnificent crowns are already becoming stained from the bruised bark of their rubs. On a mature, 4 1/2-year-old buck, the antlers will weigh upward of 1 1/2 pounds per side, though an antler of a trophy-class buck can exceed 2 1/2 pounds.

Small in comparison to the 16 pounds for a fully grown elk antler or the 35 pounds for the palms of a mature bull moose, a deer antler with its 10-inch spikes is no less imposing. Capable of easily puncturing 1/4-inch plywood, the tines can, and sometimes do, inflict terrible wounds on adversaries. However, their function is not to do battle, but to avoid a fight.

Fully aware that even the spikes of a young deer can inflict fatal injury, bucks engage in ritualistic, threatening displays, avoiding actual physical confrontation whenever possible. Ultimately, these tactics benefit the species, since combat is a risky undertaking.

Asymmetrical, or non-typical, antlers occur fairly frequently, often as a result of an aberration in the basic genetic blueprint—nature’s way of experimenting with new antler confirmations. When the asymmetry is indeed genetic, the buck will maintain the same basic antler configuration throughout his lifespan. However, non-typical antlers can also result from injury to the germinal cap during battle or from frostbite, sometimes permanently corrupting the normal development of the antler.

A work in Progress

Bucks begin to grow a new set of antlers as soon as the old set drops, which takes place any time from late January to March. At their peak growth rate in midsummer, antlers can grow up to half an inch a day. By September, the velvet covering has sloughed off to reveal the hardened rack underneath. Antlers reach their full magnificence in time for the fall rut, when bucks compete to win the attention of does.

Come mid-December, the last does have been serviced and a buck’s antlers become a liability, in that they no longer serve a purpose, but still require energy to lug around. So, as if right on cue, the connective tissue that binds the antler burr to the pedicel begins to erode and the antlers soon drop off, leaving the bright red germinal caps exposed. Both antlers might drop off within minutes of each other, or they may be shed as many as nine days apart.

And then the process starts all over again.

Antlers are not only a reflection of a deer’s genetic makeup, they’re also barometers of its physical condition—especially when you consider how a deer actually grows new antlers each year. The process begins in early March, just a few weeks after the previous set is shed. At this time, winter still has the whitetail’s northern range firmly in its grips, with snow continuing to restrict access to increasingly meagre food sources, such as browse.

Compensating for the insufficient diet, the buck will actually draw on mineral deposits in its bones to sustain antler development. While this weakens the bones, the minerals are soon replaced with spring’s arrival and the availability of new food sources.

Though growth amounts to less than 10 per cent of the final antler mass during the first two months, it’s a critical time because the final product is determined during this stage. If the deer is healthy and in its prime, there should be good antler growth. If the deer is still young, however, its body only begrudgingly surrenders minerals, resulting in small or spindly antlers. And if the buck is past its prime, the amount of minerals available during the initial growth is also limited, and the antlers will decline in magnificence from year to year.