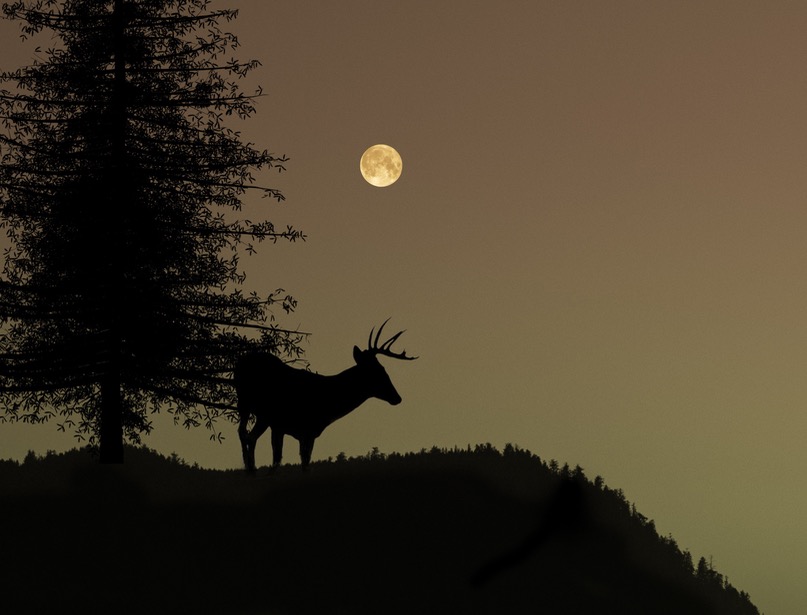 Does are the key to buck movement
Hunting

It’s one of the great deer camp debates: Do deer move more at night during a full moon, yes or no? Opinion among hunters is somewhat divided, although many do plan their hunts to avoid the period around a full moon. The theory is that when the moon is as shiny as a brand new dime, deer feed and breed all night long, then squirrel themselves away during the day. According to a recent study conducted by Pennsylvania State University, however, it turns out that theory is pure bunk.

For the study, researchers fitted several adult white-tailed does with GPS tracking collars and, over two years, captured data on when and how far the deer travelled during the month of October. These were wild, free-ranging deer in public forests, similar to the whitetails you and I hunt. The study examined three variables: sunrise/sunset times, moon phase and hour of the day.

One thing all hunters know was soon reinforced—the deer moved significantly more within the two-hour periods around sunrise and sunset than they did during the rest of the day. The GPS collars revealed the average distance a deer moved during the night was 60 metres an hour, with an increase beginning around 6 a.m. and peaking at 125 metres an hour at 7 a.m.

During daylight hours, the average movement was 50 metres an hour, with an increase beginning around 4 p.m. and topping out at 140 metres an hour at 6 p.m. The does’ movement then dropped back to 50 metres an hour by 8 p.m. The researchers also found there was slightly greater activity at sunset than at sunrise. No surprises there.

To be fair, there was a measureable difference in movement when moon phase was factored in, but the data revealed deer activity was at its highest during the new moon, when there was the least amount of light. The difference they travelled in one hour, however, was merely six metres more than they moved under a full moon. Six metres? I walk farther from my hunting cabin to reach the outhouse.

During a partial moon, deer moved about four metres an hour more through the day than they did when the moon was full. Considering the does were recorded as moving anywhere from zero to 2,748 metres an hour throughout the study period, these differences are statistically insignificant. However meaningless in scale, what was most surprising was that activity was at its highest, even during the night, when the moon was new or partial—the exact opposite of what many hunters believe.

It could be argued the failure to include bucks, and to not conduct the research during the November rut, prevented us from fully exploring the notion that rutting activity is highest at night under a full moon, but I don’t believe it would have made a difference. After all, it’s the doe movement that’s critical.

HOUR OF THE DAY

A doe can come into estrous at any time of the day, and remains so for up to 24 hours. When a doe’s ready, the bucks will go to her, irrespective of the time of day or moon phase. It makes little sense to think bucks would rut only at night and hole up through the day.

Doe activity is driven largely by the need to forage, and we know they feed most often at dusk and dawn. Between those times, they bed and ruminate. Day after day, month after month, year after year, this behaviour is as predictable as the sunrise, interrupted only by human activity or the presence of predators. And the bucks are more active than normal during breeding season only because they move from doe group to doe group in search of breeding opportunities.

As far as the moon phase goes, however, it might be of interest to know your waning gibbous from your waxing crescent, but don’t plan your deer hunt around it.