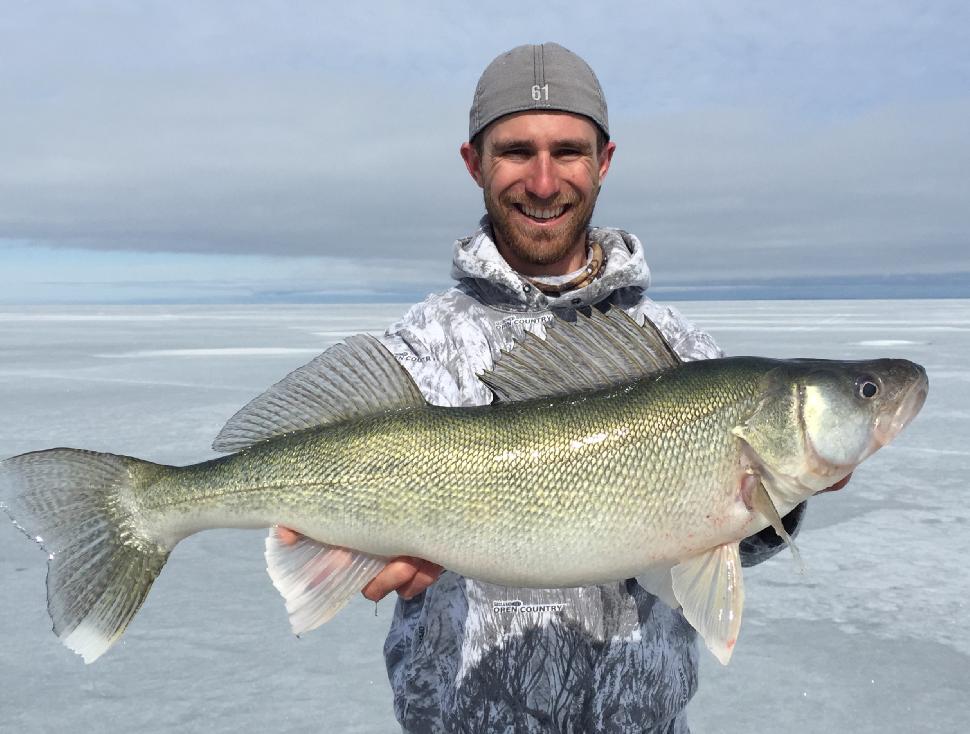 Lake Winnipeg's red-hot walleye bite is perfect for testing new presentations. Here's what we are learning

As well as being the hottest winter walleye fishery on the planet these days, Manitoba’s Lake Winnipeg is something else. It is an extraordinary place to test different lures, baits and presentation options.

You’d think the two would automatically go together, like ham and eggs, or peanut butter and jelly, but for some strange reason that never ceases to amaze me, most folks use the same lure or presentation, day after day, month after month, season after season. If it ain’t broken, why fix it, right?

Well, wrong, because in this case, as Winnipeg-based buddy, Peter Tully will tell you, fine-tuning a good bite can make it otherworldly.

Peter, by the way, is a past winner of the Kenora Bass International, and when he isn’t out on the frozen, windswept stretches of the massive prairie sea, you’ll find him behind a desk in the Cabela’s Canada main office where he is the Category Manager for fishing.

Since the store is also my second home away from home, I bumped into Peter recently and he was grinning from ear to ear. The kind of grin that can mean only one thing: “I know something you don’t know.”

So I started my interrogation.

“Open water or frozen?” I asked.

As it turns out, Peter got onto one of the best winter walleye bites he has ever experienced last winter using flutter spoons, specifically, the new Mepps Syclops Lite.

Obviously, I needed to know more.

“Flutter spoons are especially effective on lakes when I want to cover water,” Peter told me. “My method of “ice trolling” often leads me to drill over 100 holes a day as I search the basin, reefs and other points of interest, looking  for schools of feeding walleye.

“A flutter spoon is a great option because its flash in clear water and lateral line in murky water pull in the fish. The other benefit is that I can tip a spoon with bait and still maintain the desired action of the lure. This doesn’t mean that I have abandoned rattle baits and jigs because they are still effective some days.  But I have found that walleyes more often prefer a spoon fluttering slowly past their faces. Ice fishing with spoons definitely isn’t a new technique.  But it has been forgotten by many ice anglers and it is only now beginning to regain its popularity.”

Being a run-and-gun enthusiast, Tully ice fishes for walleyes outside his shelter probably 90 per cent of the time that he spends on Lake Winnipeg.  The strategy lets him cover water efficiently and effectively, especially given the fact that he stays at a hole for less than ten minutes if he isn’t seeing walleyes on his sonar or catching them.

“I have been jigging the regular Syclops spoon for a few years now,” says Tully, “But the Syclops Lite became my go-to walleye lure last winter. I love tipping these spoons with a piece of minnow for the extra scent and flavour and I adopted the method that you explained in Outdoor Canada magazine back in 2014.

“I put a Fastach clip between the treble hook and the spoon. This way, I can remove the hook, slide a minnow head onto the shank and load the hook back onto the lure in a second or two.  It keeps the bait from falling off the treble and doesn’t hinder the action of the spoon.

“The best way to describe how I work it is pop, drop and rock. With the lure a foot off the bottom, I begin by popping the rod tip upwards sharply about one foot.  Then I let it flutter down on a barely slack line.  I say barely slack line because I don’t want to hinder or interfere with the action of the lure as it descends.

“I want the Syclops Lite to fall nearly horizontally as this produces the best fluttering action.  At the same time, I want my line to be  almost tight, so I can see it jump when I get a bite. To work the spoon properly like this, you need a longer rod that I’ll tell you about in a minute.

“Anyway, I will repeat this popping motion for a few minutes or until I mark a walleye. Then I’ll begin to slowly and steadily bob the rod tip up and down. This causes the spoon to rock back and forth, and this rocking manoeuvre is my favourite move to get a big walleye to eat the bait.

“Often I am rocking the Syclops like this as I watch the big red arc on my sonar screen fully envelop it.  I picture it as a stare down between my spoon and a big marble eyed beast down on the bottom of the lake.  I just love it when that big walleye cracks first and snaps up the spoon.”

If Tully’s pop-drop-and-rock presentation fails to entice a walleye to eat his Syclops Lite, he alters the presentation by first popping up the spoon, but then dropping it on slack line until it is  hanging above the fish.   What he is doing is forcing the fish to swim up for the meal that is dancing above its head.

When he finally sees the walleye begin to move, he drops the spoon ever so slowly on its noggin and holds it there.

“I’ve rarely had success pulling a lure up from beneath a big walleye and getting it to eat,” Tully says.  “They would much rather have it dropped down to them.  That way they can focus on it and watch it the whole time.  There seems to be something ingrained in a walleye’s DNA that coaches it to sit with it belly close to the bottom, searching for prey from above.  I have actually scared fish with my lure, by dropping it below them and out of sight, when I hoped that a new look might entice them to bite.  Keeping the Syclops above the fish at all times is the best way to get them to commit.”

Be sure to read Part Two of my interview with winter walleye ace, Peter Tully, when he dishes out more of his walleye spoon secrets.