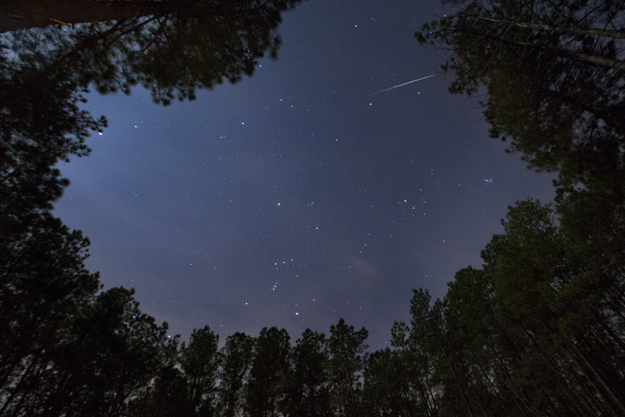 Do You Know the Stars of Summer?

When the skies are clear and you’re far from bright lights and big cities, the night sky looks amazing. There’s nothing quite like the quiet pleasure of lying on your back in the dark and staring up into eternity. But do you know your way around? With a little knowledge, you can be a tour guide to the stars. And to really impress, also learn the Latin names of our stellar neighbourhood’s heavenly bodies.

Start your stargazing with the Big Dipper, or Ursa Major. It’s that large constellation in the northern sky that looks like, well, a big dipper. It’s easy to pinpoint and makes for a great reference point for finding other wonders of the night sky.

After identifying the Big Dipper, start by looking for Polaris, the bright North Star. The two outermost stars in the Big Dipper’s bowl point directly to Polaris, which in turn anchors the handle end of the Little Dipper (Ursa Minor). Now you have two constellations—comprising 14 stars—to help you find the other major sights.

The stars of the northern sky are the most familiar, because we can see many of these constellations and star patterns all year long. So find and name some big ones. The serpent-like Draco wraps around the Little Dipper. Cassiopeia is a crooked “W” in the northeast. The Swan (Cygnus) is a big one, almost directly overhead in summer; it contains the easily spotted Northern Cross. The star cluster Pleiades, also called the Seven Sisters, is east of and below Cassiopeia.

In April, Mars made its closest pass to earth in two years, but it will still be visible, though not prominent, shifting further southwestward in the evening sky throughout summer. Venus is the “Morning Star” this summer, rising in the east before sunrise. To help find Mars and Venus, as well as Jupiter and Saturn in the early summer, it’s best to consult a star chart (see “Sky guide”).

Shooting stars can appear any time, but the second weekend of August features the prolific Perseids meteor shower in the northeast sky. You don’t need precise directions to find the Perseids, but an inflatable mattress makes viewing more comfortable. If the sky is clear, you can typically see meteors all night long. There will be a bright moon during this August’s showers, however, so the best viewing will be around 4 a.m. Be sure to also look for Venus while you’re up.

Using a scope or binoculars, you can spot even more heavenly bodies with the help of star charts. Spiral-bound chart books with sturdy pages are available in most bookstores. Review the maps before you head out, and to consult the charts in the dark, use a red light or a red filter over a small flashlight to preserve your night vision.