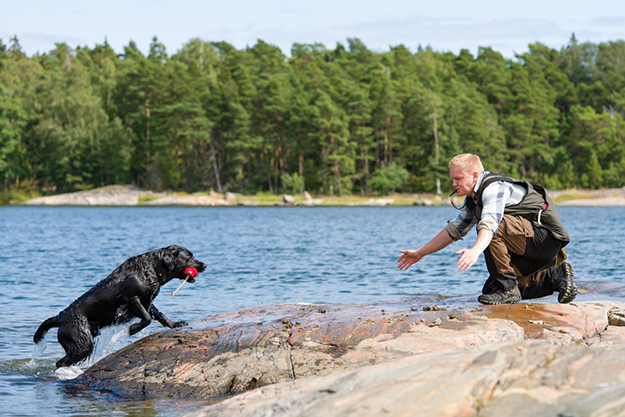 Dog Sense: How to Make Your Retriever a Good Swimmer

If you want your retriever to charge into the drink to fetch fallen ducks as though his tail were on fire, make sure his first time in deep water is a fun time. For starters, never force your dog into the water to teach him to swim. All dogs can swim if they have to, but if you force them, you risk turning them into land lovers, making it harder to train them for water retrieves.

Begin in the summer when the water is warm. Pups don’t have the same thick coat as adult retrievers, so they won’t enjoy the frigid water earlier in the year. Start by getting wet yourself in shallow water, and let the young dog enjoy playing with you and his toys. Gradually move deeper, but if the dog shows hesitation, go back into the shallows. It may take several trips to the lake for the pup to begin swimming on his own.

If the dog has a strong retrieving instinct, he may swim out to a toy; if that’s the case, gradually toss the toy into deeper and deeper water. Likewise, if the dog is motivated by treats, he can be enticed deeper and deeper with floating treats such as Cheezies. Or it could be that your dog simply wants to be near you, in which case he may simply follow you as you gradually move into deep water.