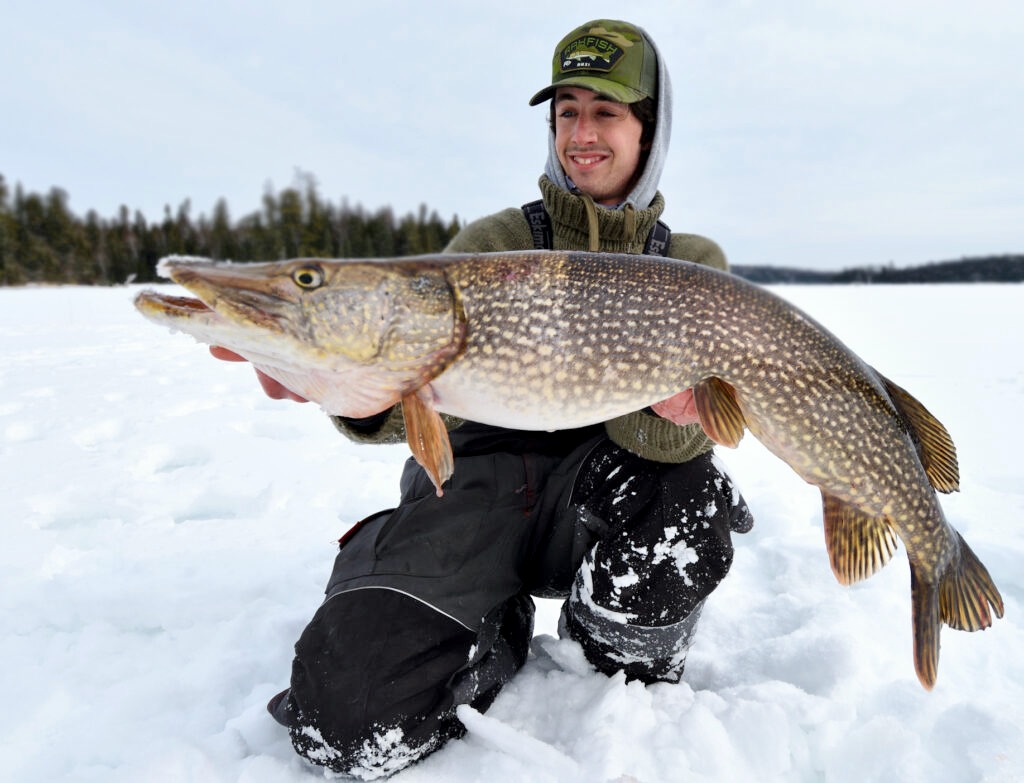 Sudden colour changes can be related to neurological damage or stress

If you spend any amount of time on the fishy side of social media, you’ve likely seen images of what appear to be two-toned fish.  I’m talking about muskies, northern pike and smallmouth bass, in particular that—not unlike a 1950s-era Chevrolet—have two different shades or colours. Two winters back, for example, my grandson Liam and I landed a beautiful northern pike that was light silver in the front portion of its body, but darker and more traditionally hued in the back half.  I know we both scratched our heads, and wondered what caused the dichotomy. Now science may have some answers.

“We’re seeing more and more colour pattern variances in the esocids being reported,” says Queen’s University professor, Dr. John Casselman. “I believe they’ve always been there, but more are being reported these days because of easier access to photography. I’ve done a lot of electrofishing and have noticed that shocked fish will often change colour patterns. I think it is something that changes the neurological response associated with melanophores.  In the case of electrofishing, the neurological control of the melanophores results in them being more prevalent and showing dark colour patterns. I’ve always considered this to be associated with neurological damage, which in the case of electrofishing can be either temporary or permanent, depending upon the extent of the damage.”

For those not acquainted with electrofishing, it’s a survey technique that fish and wildlife agencies often use to sample the fish population in a lake or river.  Two electrodes are placed in a water that deliver a current that stuns the fish, causing them to float up to the surface, where they’re netted, measured, weighed, tagged, allowed to recover and then released.

Listening to Casselman explain how fish sometimes respond to the treatment by changing colour intrigued me, because when Liam and I first landed the big pike last winter, we didn’t see the two-toned pattern.  It was only after we handled the fish and removed the hook, that we spotted the change.

“Many years ago, when I was rearing pike under controlled conditions, studying growth for my doctorate, I grew some fairly large pike,” says Casselman who, for many years was the senior research scientist with the Ontario Ministry of Natural Resources. “I kept them for up to 18 months, during which time they grew from small fingerlings to 6-pound fish. I weighed and measured them every month, studying growth in relation to temperature. I remember vividly dropping one pike that was about 40 centimetres long, which had a very normal dark matrix with a white spot coloration. When the fish hit the floor it didn’t appear to be damaged but then I immediately realized it had turned almost colourless, yellowish-white, much like the pike you and Liam caught.

“I aestheticized the fish, measured it and then put it back in the tank for its next study period.  The following day it had returned to its typical dark-light spotted pattern. I’ve always considered that this change is related to some neurological damage or stress that may or may not be permanent.  Given that the light colour pattern is appearing in the anterior, I am wondering if it’s related to some trauma associated with hooking in these angled fish.”

Friend Sean Landsman, who authored Project Noble Beast, the seminal research on muskie behaviour in the Ottawa River, says that like Casselman, he, too, has noticed rapid colour change in electrofished muskies and smallmouth bass. Also, in each instance the colour change appeared to be temporary and the fish restored its hue in due time. By contrast, however, the colour of at least some of the fish appearing in social media posts seems to be permanent.

“Pigmentation and the movement of chromatophores around the body is under the control of both the endocrine and nervous systems,” says Landsman, who teaches at Carleton University. “So a breakdown in either or both systems—via stress or a developmental abnormality—could result in patterning like this, such that it becomes a permanent fixture of these individuals. This, to me, would be a simpler explanation than something like gynandromorphy.”

If you’re not familiar with the term gynandromorphy, it is the extremely rare condition when one half of an animal is male and the other half female. “It has been documented in lots of bugs, but also birds, crustaceans, and fish with two-toned or other weird coloration abnormalities,” says Landsman. “I just had a former student send me a photo of a half blue/half red lobster that he bought at a wharf in Prince Edward Island. Evidently, it is not super unusual in lobsters, unlike the blue coloration which is super-duper rare. The only way to confirm gynandromorphy would be to sacrifice the fish and examine its internal anatomy.  But I’m more inclined to apply Occam’s Razor here and say that it’s likely a genetic mutation. Why the same areas of the body seem to be affected is a little odd and makes me wonder if there’s a developmental abnormality going on.”