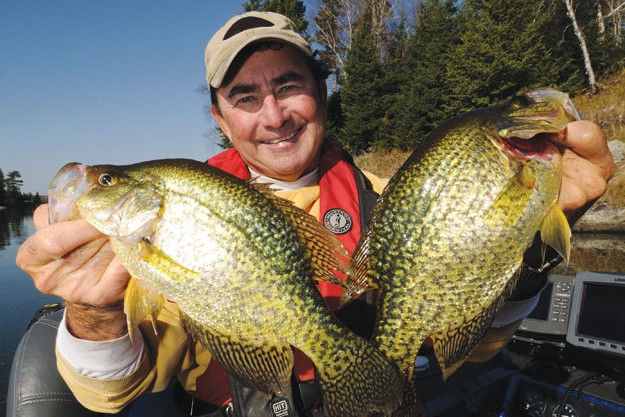 When I started writing for Outdoor Canada in the early 1980s, one of my fi rst features was about black crappies, which I called “Ontario’s best kept secret.” Can you believe I wrote that? But it was true. Other than some scattered lakes and rivers in northwestern and southeastern Ontario and around Lake Erie, there were few places to target these darlings of the panfi sh world. These days, however, you can find black crappies from Manitoba’s Whiteshell Provincial Park to the St. Lawrence River in Quebec, and their range is rapidly expanding due, in large part, to the impoundments of Arkansas, Oklahoma and Missouri, where anglers are as passionate about their crappie fishing as Canadians are about hockey. But our crappie fishing is better—way better. And there’s no better time to fish for them than in the autumn, when the days are still gloriously warm, the scenery is spectacular, the best crappie lakes are deserted and the fi sh are feeding aggressively to pack on calories for the winter ahead.

What’s more, you likely already have all the basic gear—boat, motor, sonar, rod, reel and tackle—needed to take advantage of these perfect conditions. All that’s left is to learn how to use it to specifically target these black beauties.

Let’s start with perhaps the most critical ingredient: your sonar unit. Simply put, you need one. It doesn’t matter how expensive it is, how big the screen is, whether it’s black and white or colour or has a built-in GPS; so long as you know how to read the unit and interpret what you’re seeing, it’ll do. The other prerequisite is a good bottom-contour map of the lake, river or reservoir you’re fishing. When you have these two aids, fall crappies can run, but they can’t hide.

To search a new lake, I first identify on the map where the fish have likely spent their summer vacations—in and along deep weedlines, pencil reed beds and concentrations of deep docks and marinas. Next, I highlight sections of the lake where the fish are going to spend the winter. Best are moderately deep—25 to 35 feet—pockets and basins with fl at, soft, muddy bottoms. If the lake is shallower, I simply look for the relatively deepest basins. Regardless, the best pockets are well defined and comparatively small in size. It’s not that the bigger basins don’t hold fish in the fall, because they do—it’s just much easier to find fish in the distinct, moderately sized holes.

Once you’ve completed the map work, you’ll know which sections of the lake the crappies are filtering away from and the areas into which they’re trickling. And filtering out and trickling in is the best way to think about fall crappie movement, because it’s not a mass migration. Early in the fall, in fact, you’ll find the fish closer to their summer haunts, while late in the season you’ll find them scrunched up in the pockets. That’s why you need the sonar unit.

I’ll never forget one season, around Thanksgiving, when my fishing buddy Tom Van Leeuwen and I reconnoitered a lake reputed to hold slabs. We searched for six hours without turning off the outboard or wetting a line, our eyes glued to Tom’s three sonar units until we finally found the fish—fall crappies typically congregate in ever larger groups, resembling a Christmas tree on the sonar display. We then pitched out a marker buoy over the school of several hundred fish and proceeded to catch-and-release one plate-sized behemoth after another.

Another reason for using sonar is that it tells you how to catch the fi sh. When you see big schools of crappies bunched up and hovering well above the bottom, they’re usually feeding aggressively. That means you can use an aggressive presentation. I like casting a 1⁄16- to 1⁄8-ounce ReelBait Flasher jig tipped with a small, two- to three-inch live minnow, scented soft-plastic GULP! or Trigger X imitation.

Simply cast the jig and let it fall to the bottom, or count it down to the same depth as the fish, then slowly swim it through the school. A light-action spinning rod and reel spooled with fourpound-test gel-spun super-line, such as Fireline, Nanofi l, PowerPro or Sufi x Fuse, is unbeatable for this task. I also like to add a short four-pound-test Maxima fluorocarbon leader to the end.

When you find fall crappies bunched up like grapes, you can also position your boat directly over the fish and drop down a jig, small spoon or tiny ice-fishing Jigging Rap. Don’t bother tipping it—just drop the bait while monitoring its progress on your sonar screen, and stop it a foot or two above the fish. Then pop your rod tip from the eight o’clock position to about 10 o’clock and let the lure fl utter back down under controlled slack. Either you’ll feel a crappie thump it when you pause at the end, or you’ll see your line go slack—a dead giveaway that a fish inhaled it on the drop.

Crappies will sometimes spread out and stay glued to the bottom instead of suspending. I suspect it’s because they’re gorging on mayfly nymphs and caddisfly larvae. Regardless, when this happens the most exciting way to catch them is by slowly trolling small crankbaits—Rapala Mini Fat Raps and Ultra Light Minnows are good bets—behind three-way swivel rigs. The set-up is simple. Use your favourite seven- to 7.-foot-long, light- or medium-light-action spinning rod and reel, spooled with six- or eight-pound-test braided line. Attach a small three-way swivel to the end of the braid and an eight- to 12-inch length of six-poundtest monofilament to one of the remaining swivels. This dropper line will hold your weight—the same cylindrical tungsten drop-shot sinker you use for bass. Finish off the rig by tying your crankbait to an 18- to 24-inch length of fouror six-pound-test fluorocarbon attached to the third swivel. My fishing buddies and I pioneered this finesse trolling rig back in the 1980s when fishing for crappies was the best-kept secret in Canada. It remains just as deadly today—even though the secret’s out.