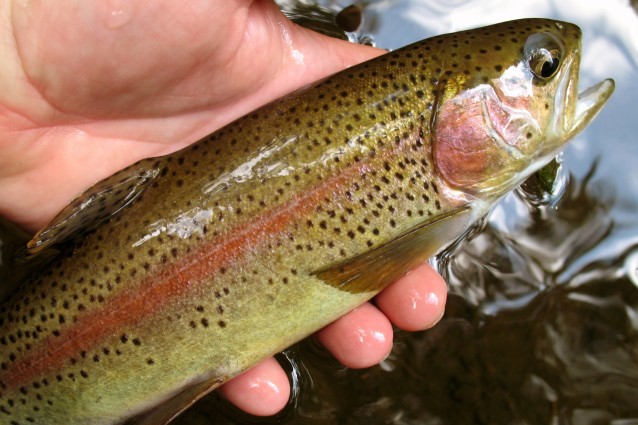 Just like their brook trout cousins, rainbows are typically found relating to relatively shallow water during the winter, especially around the mouths of weedy bays, coves and inlets. And as with brookies, I typically find the rainbows cruising just above the bottom when the water is less than five feet deep.

However, when the water is slightly deeper—say, 10 to 12 feet—rainbows behave quite differently, usually gliding in the middle of the water column. I’m certain this is a feeding strategy the more aggressive rainbows have adopted to attack small minnows, insects and crustaceans, either above or below them.

Rainbows in small lakes and ponds also have a tendency to move around much more than brookies, albeit not in a random fashion. Instead, they tend to never stray too far from the lake’s most fertile sections. Knowing this, I get excited whenever I find a shallow weedy bay at one end of a lake—I know a sizable portion of the local rainbow population will be relating to it, cruising around the mouth of the bay and pushing up into it a bit, or roaming the drop-off area just outside of it.

On the other hand, if I can’t find a weedy cove, I can just about guarantee I’ll cross paths with the fish if I drill my holes and start ice fishing over the flattest, shallowest section of the lake.

The next high-percentage spot is a deep-water cut or inside turn looping into a large area of shallower water. The trout gather in these enclosed confines, and you can often catch them by jigging in a variety of depths—from as little as five feet to as much as 15 feet below the surface. When I find one of these corrals looping into a shallow bay or lake section, I’ll pinpoint the edge of the drop-off with my sonar and drill holes at least 50 feet away, setting up over the deeper water to catch the roaming rainbows.

Just keep in mind that when you’re ice fishing in these corral-like areas, the trout can see for a considerable distance in the gin-clear water. In this case, the name of the game is always to attract the fish first, then trigger them to bite when they come in to play.

Here’s another rainbow trout characteristic unique to these small lakes: the fish love to roam up and down deep edges, so obvious points are always great spots to fish. That said, don’t ignore the shorter, seemingly insignificant secondary and tertiary points—they can be even better. Why? I suspect these small points concentrate the rainbows more tightly, fuelling their competitive nature to bite when they spot a lure.

When it comes to effective ice-fishing presentations, most anglers overlook the fact that rainbows—and brook trout—are the top predators in these smaller backcountry lakes. So observes eastern Ontario trout guru Paul Shibata. “With no pike, muskies, bass or walleye around, the trout can behave aggressively,” he says. “Mother Nature has also programmed them to be opportunistic.”

Shibata, who has iced rainbows and brookies weighing up to seven pounds, uses a 1/16-ounce jig tipped with a three-inch Gulp! Minnow as his go-to bait. “It’s the universal profile,” he says, adding that he’s also experimented with Gulp! Leeches and found them to be very effective. “The key is to keep your jig close to the bottom, even laying it on the bottom.”

According to Shibata, the light jig attracts the trout without burying itself in the lake-bottom mud and detritus. “When you lift it up every once in a while, and let it fall back down,” he says, “it adds a bit of motion, stirs up a cloud of silt and calls the trout over. Then they clobber it.”

Although Shibata and Coulter have never met, their strategies are strikingly similar, especially when the rainbow bite toughens and Shibata reaches for a rod rigged with the smallest Williams Wabler spoon. “When you use a light spoon,” he says, “just like a jig, it doesn’t plummet to the bottom. Instead, it falls ever so slowly, reflecting light and flashing subtly.”

Shibata has also had success with jigs such as the ReelBait Flasher Jig, which sport a small willowleaf blade under the head. “There’s not much of a spin to the blade, especially when you’re fishing in only a couple of feet of water, but it’s precisely what the trout want,” he says. “It’s not overpowering; there’s just the tiniest hint of flash.”

Like Coulter, Shibata prefers ice fishing for trout with relatively light, six- or eight-pound-test fluorocarbon—but not for the invisibility factor you might suspect. Instead, he prefers the tougher fluorocarbon because it’s less likely to break than mono when a big ’bow rubs it against woody debris.

And like many of the top ice-fishing professionals these days, Shibata doesn’t spool his line on standard spinning or baitcasting reels. Instead, he uses small fly reels, which balance better with the light, soft-tipped rods he uses for rainbows. As well, he says, you never get line twist with a fly reel.

“Most anglers aren’t aware of this,” says Shibata, “but every time you fight a fish on a spinning reel and your drag slips, you’re putting a tiny bit of twist into your line. Even reeling up your lure quickly and dropping it back down your hole will cause your line to twist and your lure to spin. It doesn’t happen when you use a fly reel.”

A fly fisherman at heart, Shibata will also match the hatch in the winter, tying streamer patterns—Woolly Buggers are his favourite—onto 1/16-ounce jigs. He then drops them to the bottom and drags them along through the silt. “Obviously, I’m restricted by the diameter of the hole, so my retrieve is more of a slow lift and fall,” he says. “But I’m trying to drag the rig along the bottom, simulating an emerging insect.”

According to Shibata, the fish are totally aware of what’s going on in their backyard as they cruise the shallows, feeding on invertebrates. “So, the little tuft of dust I create when I drag the jig along gets them excited,” he says. “It’s a deadly way to trick both rainbows and brook trout.”

While Paul Shibata uses fly reels to ice fish for trout in shallow water (see Presentation), he has no need for the large amount of line that even a small, compact fly reel can hold. At the same time, though, he recognizes the importance of having his line looped widely around the outside edges of his reels. So, what to do?

“In the beginning, I filled my fly reels to capacity, but the large amount of line was too much weight,” he says. “It overpowered my light rods and affected the balance and sensitivity.” That’s when he came upon the idea of first bulking up the arbour with flexible Styrofoam before spooling on a relatively small amount of fluoro. He simply cuts a strip of foam down to the same width of the inside of the arbour, wraps it around the spool and fixes it in place with electrical tape. Says Shibata: “It works like a charm.”