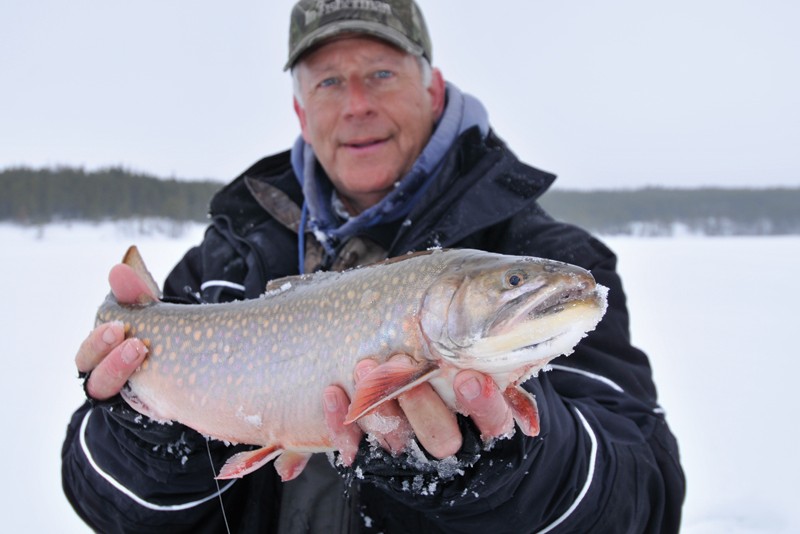 Of the three trout, brookies are surely the most handsome. They’re also the most widely distributed, the easiest to locate and the least difficult to catch under the ice. That’s an impressive set of credentials, but there’s more. Although they have relatively short lives—an eight- or nine-year-old fish is a regular Methuselah—brook trout are also fast growing. This is especially so with the genetically superior strains of brookies stocked by provincial natural resources agencies in the small, fertile backcountry lakes dotting the landscape.

Where I live in northwestern Ontario, for example, the brood stock used by the fisheries folks who gather the eggs and culture the fingerlings in hatcheries are from the same Nipigon strain that produced J. W. Cook’s 14-pound eight-ounce world-record leviathan almost 100 years ago. Most other provincial agencies have adopted similar fast-growing genetic strains for their hatchery programs.

While you can enjoy magnificent ice fishing for brook trout on any of the numerous stocked lakes, the true gems are those usually requiring a short walk, snowshoe hike or snowmobile trek into the backwoods. Find a small, fertile, off-the-beaten-track lake stocked with a genetically superior strain and you’ll greatly increase your chances of catching a mind-boggling specimen.

Regardless of where you finally decide to ice fish for brook trout, it’s important to always keep one thing in mind—you’re targeting a riverine species. So, even though you’re fishing in a small lake, the trout behave as though they’re inhabiting a river. That’s why, as a general rule, you’ll catch the vast majority of brookies while ice fishing in shallow water close to shore.

The best of these shallow—usually out to about 10 feet deep—littoral zones are typically littered with woody debris such as logs, stumps, branches and fallen trees, as well as isolated rockpiles and scattered clumps of grass and weeds. Not surprisingly, these same shallow shorelines host the vast majority of insect life in the lake, along with leeches, crustaceans and schools of small minnows.

One of my fishing buddies, Kraig Coulter, is the best winter brook trout angler I’ve ever met—he once iced an Incredible Hulk weighing just four ounces shy of nine pounds. “I caught that fish in a 200-acre lake, in seven feet of water near a beaver lodge along the shore,” says Coulter, who lives in Sault Ste. Marie, Ontario, and ice fishes the famous petite brook trout lakes along the north shore of Lake Superior.

His rig on that occasion? A lively dace minnow, hooked lightly through the back on a #2 Gamakatsu baitholder hook. He attaches it to a 14-inch-long, eight-pound-test fluorocarbon leader, which is in turn attached to his 15-pound-test mainline braid using a swivel. Surprisingly, Coulter prefers a standard tip-up, with the reel positioned in the water under the ice, instead of a Windlass tip-up that catches the breeze and gently rocks the bait or lure. He says the underwater tip-up allows his minnow to swim around naturally, and that on many days, no movement at all—a virtual deadstick presentation—is what brook trout want most.

Although Coulter enticed his 25¾-inch-long behemoth to snack on a minnow, he prefers tipping his dropper lines with nightcrawlers. And you won’t believe how he rigs them. “I’m not sure I want to talk about it,” he says, chuckling, “but my favourite presentation for brook trout is using a Williams W50 spoon in the half-gold, half-silver finish.”

To rig the spoon, Coulter removes the treblehook, attaches 14 inches of eight-pound-test fluorocarbon leader to the O-ring and ties on either a #1 or #2 Gamakatsu baitholder hook. He then threads a full nightcrawler onto the hook so that the head of the worm covers the eye of the hook. If the trout are biting short, he’ll sometimes add a stinger hook, although he says he prefers not to.

Coulter then sets the rig under a tip-up and lets the crawler dangle and squirm close to the bottom. While the spoon sparkles and reflects light, attracting the trout, the worm triggers them to bite. “It works everywhere I’ve ever ice fished for brookies, although I’m not sure why,” he says. “I mean, minnows are far more common in most trout lakes, yet I catch more and bigger trout in the winter using crawlers.”

While Coulter prefers using nightcrawlers to catch brook trout, he’s quick to admit he often tips a second dropper line, where legal, with a minnow to let the trout decide for themselves what they want to eat. But not just any minnow will do—whenever possible, he traps native baitfish from the lake he intends to fish.

I was surprised to hear those minnows include sticklebacks, which most anglers throw away the minute they find one swimming among their shiners and chubs. But I was bowled over when Coulter said that, in many lakes, the brook trout actually gorge on the spiny minnows.

“Brookies consider sticklebacks a delicacy,” says Coulter, adding that he believes trout can chase them down and capture them more easily than most other minnow varieties. “Sometimes, I’ll keep a small trout for dinner, and when I clean it, its stomach will be crammed with sticklebacks.”