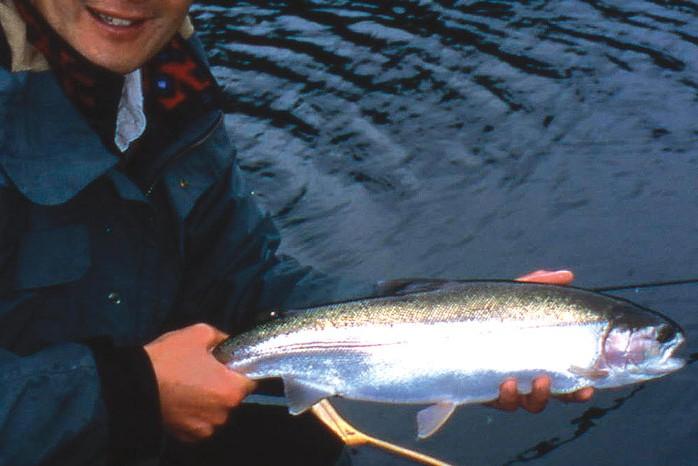 What you need to know to catch early-season 'bows

Brian Chan has been chasing rainbows—rainbow trout, that is—for 40 of his 49 years. And as a fisheries biologist from B.C., Chan certainly knows a thing or two about fishing for Canada’s most common trout. He’s even written two books on the topic—Flyfishing Strategies for Stillwaters and Morris and Chan on Flyfishing Trout Lakes—and he’s produced two videos on stillwater strategies. On top of all that, for the past 28 years Chan has lived in Kamloops, B.C., which is surrounded by thousands of small lakes, most of them holding bragging-sized rainbows. He’s also fished for rainbows in rivers in B.C., Idaho, Montana and Oregon, as well as in the world-famous Bow River in Alberta.

Chan especially loves fishing for rainbows in early season, when the fish are particularly hungry and actively searching for food after months of inactivity in frigid, ice-covered water. At that time of year, rainbows aggressively chase down attractor flies and lures, making them a good opening-day fish of choice for anglers.

“Most of the lakes I fish are small, less than 200 hectares,” Chan says. “These lakes typically fish well at the season opener.” Lakes are often better early destinations than rivers and streams, he says, because spring runoff from melting snow and rainfall can cloud up flowing water with silt.

For lakes, he recommends that fly fishers try flies such as chironomid pupa and larva imitations, freshwater shrimp or scud flies, and leech patterns. High-density sinking or sink-tip lines and long leaders are often needed to get the fly down to where the trout are hanging out. For spin fishers, effective lake lures include Flatfish, Quickfish, Dick Nite spoons and Mepps spinners.

In flowing water, Chan suggests Mepps and Roostertail spinners and Crocodile spoons. Use brighter, larger lures in murkier water, copper or silvery smaller spinners in clear water. Vary the retrieve until you find the right speed to provide a strike. Where it’s legal, roe and worms can also be effective.

When Chan is searching for river rainbows, he focuses on deeper runs and tailouts of pools. A large rubble or boulder substrate indicates the presence of natural stonefly nymphs and, hopefully, big hungry rainbows. For fly fishers, then, Chan touts stonefly nymph flies and caddisfly larvae imitations.

Like a rainbow trout on steroids, steelhead are famous for their fighting strength and water-clearing leaps. In fact, steelhead are rainbows, albeit all the tougher because they’re anadromous. On the West Coast they spawn in freshwater rivers and move to the sea, while in the East, the descendants of stocked West Coast steelies move between the Great Lakes and surrounding rivers. In keeping with rounding off your knowledge of all things trout, consider that yet another interesting bit of biological trivia you can take to the bank.