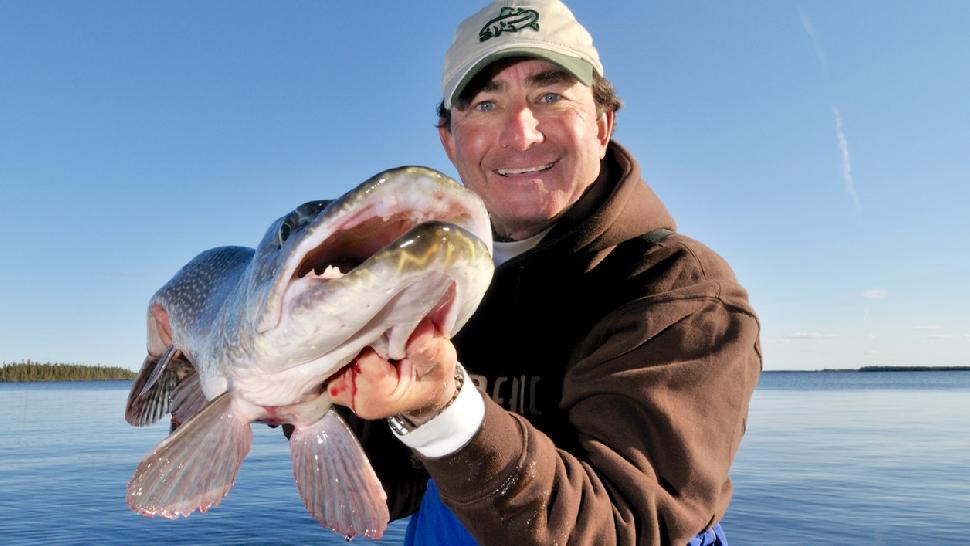 When school resumes in the fall, have you ever noticed how moms and dads eagerly wait at street corners for their kids to get off the buses? Northern pike can also be found congregating in specific places during the fall, but they’re certainly not waiting to hug their young. No, they’re waiting to ambush and devour their prey instead, making autumn the best time of the year to find and catch scores of the big toothy critters.

Indeed, unlike pike during late winter and early spring—two other prime periods—gargantuan fall northerns are not side-tracked by events such as the upcoming spawn. Instead, they have only one thing on their minds: quickly shovelling as much food down their throats as possible. This makes for a great scenario for anglers, especially given how easy it is to locate the bus stops where the action is unfolding.

Fall is the period of consolidation, when northern pike move away from the deep weed edges and main-lake structures they’ve been frequenting all summer. It’s an interesting transition, because different groups of fish are moving to the same gathering spots from multiple directions.

My favourite way to pinpoint the terminals is by noting the location of the best late-summer spots, then identifying the nearest main-lake or large island points that break into deep water. If there’s an associated ledge or feeding flat in 10 to 20 feet of water, so much the better.

It’s worth noting, too, that the migration out of the back bays has nothing to do with withering or decaying vegetation, or a decline in oxygen levels, as so many anglers mistakenly believe. Instead, the pike are merely following prey, including yellow perch and walleye, that are transitioning to their deep-water fall, and eventually winter, locations.

Even more importantly, however, the big toothy critters are setting the stage for a feast as they intercept pelagic ciscoes and whitefish—and in some cases, lake trout—that are shifting toward shallow rocks to spawn. And once you’ve found one of these bus stops, the great thing is, it will remain productive in perpetuity, as the fish will return to it every fall.

I should mention, too, that this pattern begins falling into place once the water temperature drops below 15°C. It then peaks at 10°C and continues until 7°C or so, especially when we’re blessed with unseasonably warm weather. By late fall, however, the fish will have finally moved to their winter locations.

Meanwhile, a good bus stop becomes a great bus stop when it’s exposed to wind and waves. And by parking your boat over deep water, casting up shallow and retrieving your lure out over the break, you’ll always get better results than you would if you stopped in the shallow water and started casting.

If you prefer spoons, go with a 4½-inch (3/4-ounce) or 5 1/4-inch (one-ounce) half-gold, half-silver Williams Whitefish. I always replace the factory treblehook with a single Siwash hook and adorn it with a five- or six-inch white curly tail grub. Why switch out the hook? You get a much better hook-up with a single barb rather than a treble. Plus, a single hook is less likely to snag.

Light-action muskie and medium-heavy-action bass rods and reels are ideal for tackling fall pike. If I’m using a baitcaster, I’ll spool it with 20- to 40-pound braid. For my spinning sticks, on the other hand, I prefer a good-quality 14- to 17-pound gel-spun line. And I always tip my lines with a quality titanium or tieable stainless steel leader.

Just remember, there’s no need to impart any erratic directional changes on your lures when you’re fishing around a bus stop. The giant ’gators are waiting eagerly and ready to bite, so all you need to do is reel in and hold on.