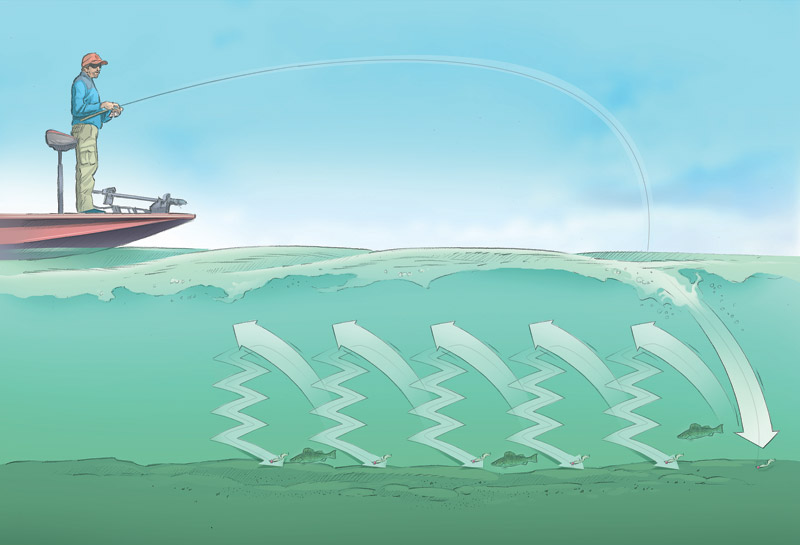 Secret lures, never-fail presentations, magical tactics. When it comes to walleye fishing and promises of the next big thing, I’ve heard it all. The trouble is, when I finally get a first-hand look at some supposedly revolutionary new bait or watertight technique, it almost always fails to live up to the hype. Unless, of course, the promise is coming from someone such as Jeff Matity.

Not only is Matity a good friend of mine, he also happens to be one of the hottest walleye sticks in the Prairie provinces. Guiding full time out of G&S Marina Outfitters on south Saskatchewan’s Last Mountain Lake, he’s on the water almost every day of the season. So when Matity told me he was onto a “finger lickin’ good walleye pattern,” I just knew I had to check it out.

As soon as I stepped onto his boat last summer, Matity opened his tacklebox, picked out the lure he had been wetting his pants about and handed it to me to examine. I coughed and choked back the words, “Are you kidding me?” What graced his palm was something called a Fergie Special, a spoon that resembled nothing I’d ever used before to catch walleye, especially big, tough, super-smart, highly conditioned trophy-sized fish.

Made by Nebraska’s ReelBait Tackle Company, the Fergie is a heavy, compact, painted slab of solid lead with treblehooks at each end and a four-inch wire leader at the nose, through which a free-sliding brass clacker is sandwiched between two red glass beads. Hello! I thought. You can’t catch walleye on this thing.

Well, as it turns out, yes you can—over and over and over again. In fact, Matity and I walloped so many Last Mountain Lake walleye by hopping, popping and jigging the uniquely designed lead spoon that we lost count. And after Matity’s brother Jason landed a gorgeous, 13-pound goliath one afternoon, I was convinced the Fergie is one of the best big walleye baits around—and no one is using it other than a handful of skilled Saskatchewan anglers.

And lest you’re wondering, Matity confessed that he, too, had the same initial reaction as I did the first time he saw a Fergie, in his case dangling from the rod of an American guest. One hundred and thirty-seven walleye later, however, he had an epiphany.

“The Fergie program is a trophy tactic de-signed to push way past the traditional namby-pamby presentations most anglers associate with walleye fishing,” says Matity. “It requires you to get out of your comfort zone and into a new world—the one where top-end trophy walleyes are found.”

Once you get past your initial negative impressions and start carefully studying the Fergie, it begins to make sense . Being a modest three-inch mouthful, yet weighing a hefty one ounce, this slab spoon lets you precisely pick apart deep-water structures and cover, even if you’re drifting in a strong wind—you always know where your bait is and what it’s doing.
At the same time, you can position your boat in deep water, cast the Fergie up into the shallows and efficiently pick apart the immense area in between. There are few other lure styles that offer this kind of versatility.

How and where the weight is distributed is another key element. Because the Fergie is tail-heavy, it scoots tail first out to the side when you pop it off the bottom and let it fall on semi-slack line. If there are walleye around, this erratic planing action is guaranteed to excite them.

Then there’s the wire leader with the brass-and-glass clacker sending out a steady click-clack-click sound every time you move the lure. At first, you might think this a bit hokey, that it would tempt no self-respecting walleye, but you’d be wrong. At least 60 per cent of the fish Matity and I caught were hooked on the top treble beside the clacker—clear evidence the fish are tuned in to that frequency.

It reminded me of the time many years ago when walleye legend Mike McLelland was developing the first so-called dive curves for crankbaits, determining the maximum running depth of different lures with various amounts of line trailing behind the boat. Catching fish was not the aim of the exercise, but as you might expect, McLelland occasionally hooked an incidental walleye. For fun, he kept track of the lures that caught them.

When he later analyzed the data, McLelland discovered to his astonishment that he’d hooked almost every single fish on a lure that had an internal rattle. These days, it astounds me that so few anglers know walleye are attracted by certain sounds and frequencies—and that even fewer anglers use this to their advantage.

Making a racket is certainly key to the Fergie’s effectiveness. “The rattle on the spoon is shrill,” says Matity, who holds a degree in fisheries management. “I’ve recorded the lure underwater and the click-clack is the loudest I’ve ever documented.”

Another reason walleye are so attracted to the Fergie is that it represents the food big walleye eat: namely, juvenile ciscoes, whitefish, perch, suckers and shiners. “The planing action, noise and flash of colour somehow short circuits their brains and causes them to attack,” says Matity. “I don’t know whether it’s annoyance, conditioning, a reflex response or a combination of these factors, but I can mark a big walleye on my sonar unit, drop a Fergie spoon on its head and catch it.”

To drop a Fergie right on top of a walleye, Matity employs a unique run-and-gun method. With his eyes glued to his sonar unit and his motor purring along at a brisk nine to 13 kilometres an hour, he selects a specific band of water—the 25- to 35-foot-deep range between two points, for example—and zigzags along looking for balls of baitfish.

Once he finds a ball, Matity slows down and starts looking for a single, big-fish target. When he spots one, he pops the engine into neutral, then into reverse, and backs up over the fish. By kicking the motor into and out of gear this way, Matity stays on top of the walleye. Then he drops down a Fergie spoon, pops it off the bottom, lets it free-fall back down and slams the hooks into another giant fish.

“It’s shocking how a monster walleye is possessed to slam a hard bait like the Fergie, especially after you chug a boat over its head, stop, rumble back and then noisily hover in one place,” says Matity.

Typically with breakthrough fishing techniques, you need to use specific rods, reels and lines to ensure optimal success. That’s not necessarily the case with Matity’s innovative slab-spoon pattern. For certain, he has his personal preferences, starting with a six-foot six-inch, medium-heavy-action baitcasting rod with a trigger stick and extra-long handle that he tucks up under his arm to reduce fatigue. The rod also features a spiral guide arrangement so there’s less chance he’ll inadvertently wrap his line around the tip and snap it off.

Matity’s baitcasting reels, meanwhile, always feature flipping switches so he can fish with one hand. That’s because his other hand is typically wrapped around the tiller of the kicker motor as he backs the boat into the wind and the three-foot waves that frequently crash over the transom.

As for fishing line, Matity’s choice is brightly coloured, 20- to 30-pound PowerPro braid. He believes the stretch-free characteristics of braid provide vastly increased sensitivity and much more positive hooksets. The high-viz colour, meanwhile, lets him monitor his guests’ lines. That way, he can keep the lines away from the prop, as well as track the action of the humongous walleye they routinely bring alongside the boat.

While Matity is compelled out of necessity to fish with one-hand, he says you’ll catch many more walleye if you keep both hands on the rod and reel. That way, when you feel the lure hit the bottom, you can either retrieve or vertically jig it in short, deliberate hops. With each short rip, the bait should scoot up off the bottom about five feet. Eventually, you’ll discover a cadence that the fish like (try the rhythm method, pictured on page two).

The only disadvantage with this technique, however, is that many folks have yet to master casting with baitcasting outfits. That limits them to vertical jigging, and they miss out on casting to the shallow-water targets that routinely hold fish. If you find yourself in this group, don’t despair. Matity says a six-foot six-inch medium or medium-heavy-action spinning rod, and a spinning reel spooled with 10-pound-test monofilament, will work just as well. Indeed, Matity’s brother Jason prefers this arrangement and matches him hawg walleye for hawg walleye.

“Jason uses a spinning outfit exclusively,” says Matity. “When he vertically jigs a Fergie spoon, he typically does it with one hand on the rod and lifts it higher and pops it off the bottom harder than I do.” Even though the lighter-action rod absorbs much of the snap, the spoon still pops up about three feet. It’s also propelled differently, building up speed throughout the jigging stroke as the rod loads and unloads under the lure’s weight. Says Matity: “It can be devastatingly effective.”

And definitely not namby-pamby.

The biggest mistake an angler can make is to fish a Fergie Special like a standard walleye jig baited with live bait. Instead, you must be aggressive. How so? Cast the spoon out and let it fall to the bottom. Pause briefly, then rip it up about five feet and let it flutter back to the bottom under controlled slack. Pause again and repeat as you hop the lure back to the boat, as shown above. Or, you can simply drop the lure over the side of the boat and vertically jig it.

Whether you’re retrieving or vertically jigging, you must keep a semi-taut line as you follow the Fergie back down to the bottom. This is crucial to ensure effective hooksets, as walleye will often hit the spoon as it’s plummeting. Also, when you develop the proper cadence, you’ll prevent the line from going slack and wrapping around the rod tip and costing you a trophy fish—or worse, the tip of your favourite fishing rod.

Once you’ve mastered the proper  technique for effectively fishing a Fergie, keep the following bonus pointers in mind: