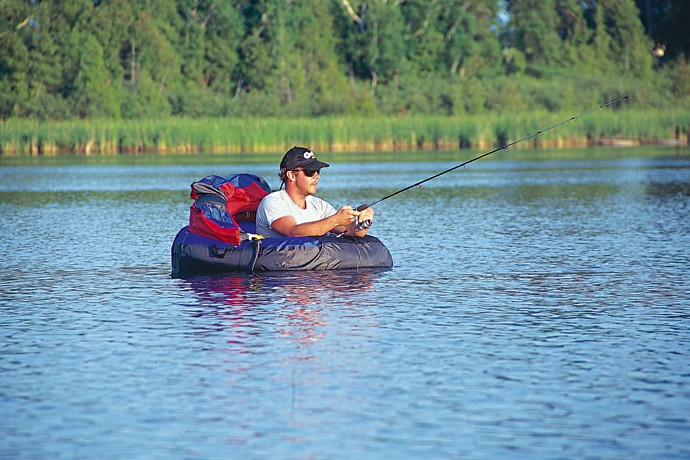 Fifteen years or so ago, a friend of mine announced that he’d met a guy who had a private trail into a great lake for largemouth bass, and he was willing to take us in. The trail was large enough for an ATV, so I could take along my inflated float tube. This would be a big help, as the only other way to get out on the water was a wooden, two-person pram stashed at the lake.

Trips to recommended hot spots rarely fulfill expectations, but this one did in every respect. The early July day was overcast and comfortably cool, and the bugs had gone on vacation. And when I saw the lake, with its shoreline of downed and flooded timber, I just knew it was a largemouth heaven.

I eagerly launched my float tube while my friend headed out in the pram with our guide. The bass were as cooperative as the weather, hitting floating deer-hair flies with reckless abandon. Just think: if I hadn’t brought along my float tube, one of us would have been stuck on shore, just out of reach of the fabulous fishing.

Clearly, float tubes, as well as pontoon boats, are handy for fishing those spots you can’t access by boat. They also offer an affordable solution for anglers who don’t have boats. Although these craft are most popular with fly fishers, other anglers can benefit equally from the convenience and increased access they provide. Here’s what novices need to know.

Now more than 20 years old, my first float tube—a fabric shell around a truck tire inner tube-reflects the product’s origin. The design has matured since then, with polyethylene bladders replacing the inner tubes and manufacturers adding larger, more comfortable backrests and ample storage space. And most modern float tubes are U- or V-shaped, which makes them easier to get in and out of. V-shaped tubes have the added advantage of reduced drag when moving through the water, while some also feature above-water seating. Though above-water seating offers comfort and visibility, it restricts leg motion. As such, it’s best suited to smaller waters.

The seating position brings up two important points about both float tubes and pontoon boats. First, much of the bottom half of your body is submerged when using either craft, so waders are a necessity. You’ll need chest waders (at least armpit high) for float tubes and at least waist-high waders for pontoon boats. I recommend breathable, stocking-foot waders, with the feet protected by lightweight, flexible-sole neoprene booties, which are more appropriate for a variety of temperatures. Neoprene waders are also satisfactory. Avoid wearing wading boots or boot-footed waders because the additional weight will quickly tire you out.

Second, you’ll need a pair of fins on your feet to propel you along. I carry two types of fins: full-sized skin-diving fins for larger water bodies, and short, stiff fins for ponds and small lakes. The shorter fins make getting into and out of the water much easier-especially around tangled shorelines-and allow you to sit straighter when manoeuvring, although they won’t get you around nearly as quickly as skin-diving fins . I also suggest you tether your fins to your ankles in case they fall off.

Long, fairly narrow fins that are supple yet sturdy offer the highest performance. The fins that best meet such criteria are competitive skin-diving fins, which can cost much more than a float tube itself, so it pays to shop around. Avoid fins that are short, very wide or extremely stiff (or soft) because they’re inefficient and will quickly tire you out.

One of the advantages of float tubes is their portability. An average tube weighs less than 10 pounds, and most will easily fit into reasonably sized backpacks, allowing you to take them into the likes of remote mountain ponds or on fly-in fishing trips. A lightweight foot pump is all you need to inflate a float tube, although a dual-action, large-volume hand pump is faster. One note of caution: tubes are not suitable for fast or rough rivers because they’re too hard to control in such situations. As well, your exposed legs could be injured.

As for the best technique to manoeuvre your float tube using fins, keep your legs parallel to the water’s surface and kick from the hips, bending your knees as little as possible. The kick is basically an upside-down version of the kick you’d use for swimming the front crawl. Slow, deep kicks won’t get you tired, and they’ll really move the tube.

Sooner or later, most serious float tubers graduate to a pontoon boat, though some anglers may skip the tube experience altogether. Basically, a pontoon boat, as the name suggests, has two inflatable pontoons, which are joined by a sturdy, collapsible frame (some companies offer lighter, frameless models made specifically for backcountry use).

Compared with float tubes, pontoon boats are bigger and offer improved mobility and more carrying capacity. As well, the angler sits higher, which makes for better sight-fishing and keeps more of the body out of the water. Pontoon craft can also handle modest rapids, but they’re not in the same league as kayaks or rafts: caution and common sense are paramount.

Generally, the size (and price) of a pontoon boat increases proportionally to its carrying capacity, so assess your needs carefully before whipping out the plastic. And once you’ve selected the appropriate size, ensure that any prospective pontoon boat has fast-fill/empty valves, an integral anchor system, adjustable foot pegs, a comfortable seat and easy-to-use oars and oarlocks.

As for accessories, I recommend a pump that can be powered by a car or truck via a cigarette-lighter adapter or by connecting directly to the battery. When it comes to fins, they are only used for adjusting your position rather than for moving from place to place, meaning you don’t need expensive diving fins. Short, wide fins that will fit easily over wading boots are best, particularly for anglers fishing rivers that demand wading boots for safe, comfortable wading.

Whether you opt for a float tube or a pontoon boat, though, you can’t go wrong. Either way, you’re sure to be right on the fish.

Like any watercraft, float tubes and pontoon boats require common sense and an eye to safety, as the following tips suggest.