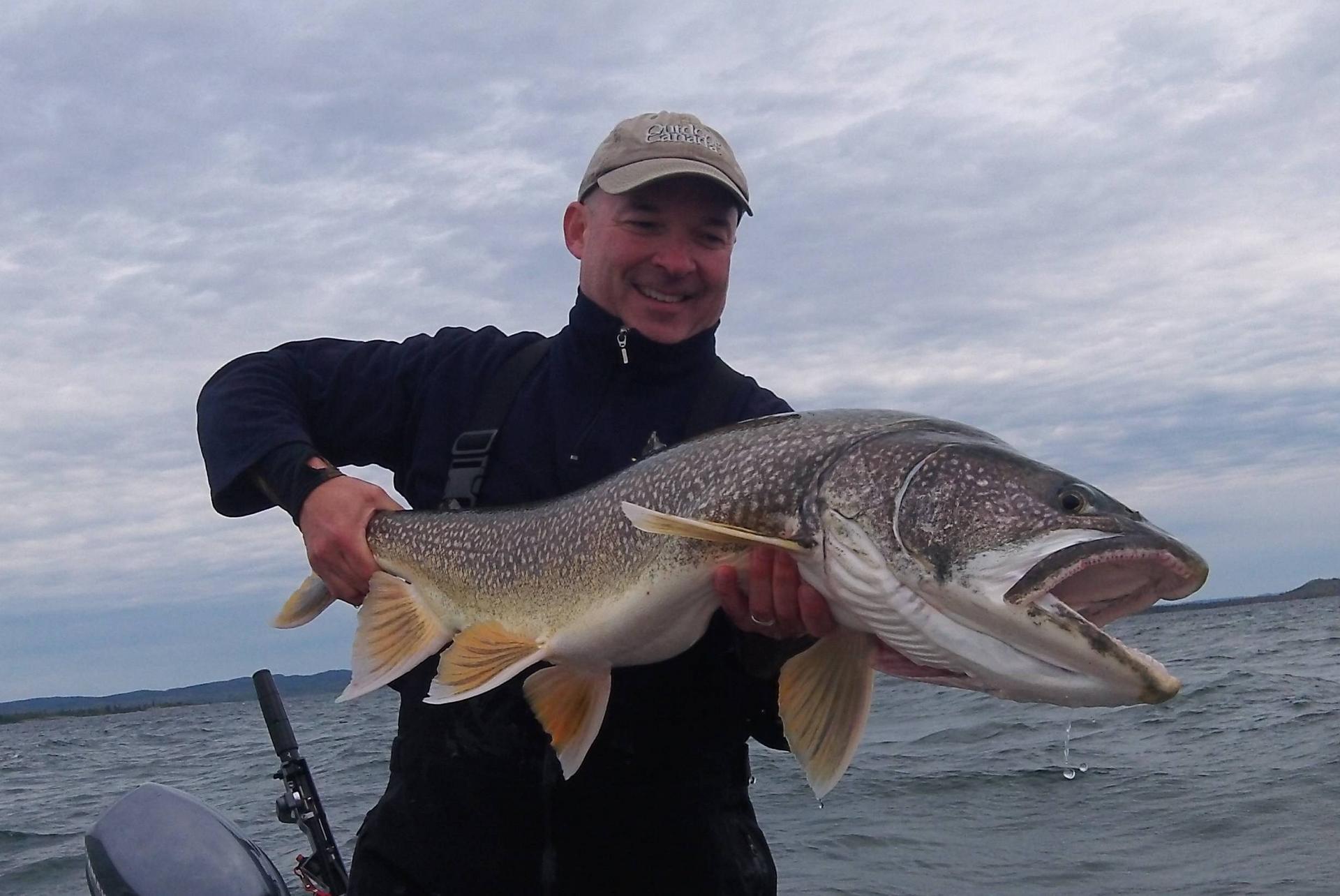 Big fish: My personal best for the day, a 41-inch laker on the fly
BlogsField Findings

It’s good to be back on northern Saskatchewan’s stretch of Lake Athabasca. It’s good to be back with Lakers Unlimited, this time at Johnston Island Lodge. It’s good to be guided, yet again, by old friend Bryan Parker. And it’s good to be fishing with John Cleveland, marketing director of Eppinger Manufacturing (yup, the Dardevle makers). Today, John and I caught, what? Seventy-five, 80 lake trout? Not that we were counting (well, I was, until I lost count), but sitting here in the camp dining room after our rib dinner, recounting the first day on the water, John and I could only come to the conclusion that, quite simply, we caught one helluva lot of fish. I do know this: we had 13 double-headers, so there’s 26 fish right there. And there was only one real lull in the action, a mysterious 20 minutes when the fish shut off. Otherwise, either John or I or both of us always had a laker on.

And get this: we caught them all on the fly.

That’s right—John and I are fishing exclusively with our fly rods on this trip (a 9-wt. in my case; John plans to switch between his 9- and 10-wt. kits). Wait a minute: the marketing director of Eppinger? Fly fishing for lake trout? An all-round angler, John certainly enjoys tossing tin (especially Dardevles, of course), but he’s also an avid fly fisherman, and in 2009 he first got the idea of hitting Athabasca’s laker spawning shoals with his fly rod. “It was just fish after fish,” he says of that first foray out of Johnston Island Lodge. Which is, as I’ve said, how it went today, reminding me of my first trip to Athabasca in June of 2010, similarly fiy fishing for giant northern pike and guided by Bryan Parker.

My fly of choice today? Giant Clouser Minnows, including a 10-inch-long white-and-chartreuse monstrosity I tied myself under the guidance of Outdoor Canada’s resident fly-fishing expert, associate editor Scott Gardner. (Scott, it worked: I caught my first three fish on it. Sweet.)

So, we’ve got the numbers, and for the next six days we’ll be working on size. Not that we didn’t catch some nice trout today. My biggest stretched the tape to 41 inches (translating to some 20-plus pounds), while John broke two of the Freshwater Fishing Hall of Fame’s line-class records for catch-and-release fly fishing. Ever the modest guy, John did not want to make a fuss about the accomplishments, but what the hell, I will (after all, it helps show what a great laker fishery this is). Toppled is the 12-pound-test record of 29 inches; John upped the bar to 35 inches. Also trumped was the 14-pound-test record of 36 inches, which John himself had set some years back. Today, he bested that by another two inches. Of course, this is all unofficial until verified by the Hall of Fame.

Tomorrow, the quest for big fish continues. On the fly.