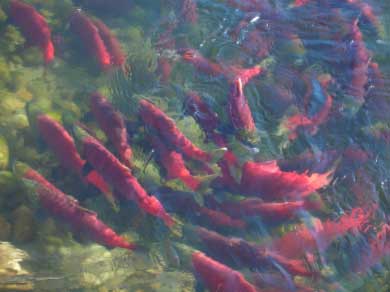 Barry Rosenberger, area director for the Department of Fisheries and Oceans, said while 30 million sockeye swam up the river last year “in the largest run since 1913,”  about 4 million sockeye are predicted to make the run this year.

While the drop might seem alarming, a return of that size is close to the long-term average of 4.6 million, and better than expected for this year. That’s because 80 to 90 per cent of Fraser River salmon are on a four-year cycle, and four years ago the return was 1.5 million, making this “a significant improvement on the cycle line,” Rosenberger said.

As a result the sport fishery that was only supposed to be open for three days a week over weekends, will now be open until further notice.

In related news, the Cohen Commission is expected to resume hearings this week. The commission is examining the collapse of the Fraser River salmon fishery in 2009, when 10 million fish were expected but only one million actually returned.