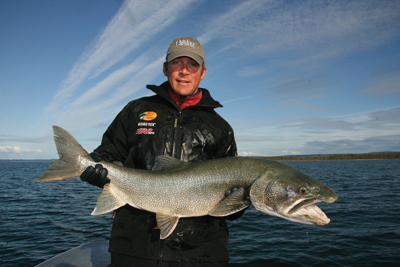 Fished by just 400 anglers a year, 31,000-square-kilometre Great Bear lies in an epic wilderness bounded by tundra to the north and stunted spruce forests to the south and west. Gator-sized pike patrol the shallows, and rivermouths teem with Arctic grayling, but we mostly love the Bear for its trophy lake trout fishing—the world’s best. A half-dozen laker line-class records have been set here, as has the all-tackle world record—a 72-pound goliath.

There may be places other than Great Bear Lake where you catch more lake trout, but there’s nowhere else on earth where you can catch bigger ones. The International Game Fish Association records speak for themselves. The world records in the six-, eight-, 12-, 16-, 20-, 30- and 50-pound line classes were all caught on the Bear, as was the 72-pound all-tackle world record and an unofficial 78.85-pound monster.

The main reason for the extraordinary fishing is obvious when you consider Great Bear Lake covers more than 31,000 square kilometres, making it the fourth largest lake in North America, the single biggest lake completely within Canada and the eighth largest lake in the world. Simply, the negligible pressure—fewer than 400 anglers a year wet a line in this mammoth inland sea—make it the stuff of dreams.

Indeed, one of my best memories of Great Bear Lake is of the view out the window of the float plane as we landed at Plummer’s lodge. The water was so clear you could see what appeared to be logs littering the bottom of the lake. Only they weren’t sunken timber—they were massive trout finning in the shallows. Even Great Bear’s Arctic grayling are gigantic, accounting for nine IGFA line-class world records. They make for a great respite from hauling in lunker trout. If you need it.

Why We Chose It: In 2010, Arctic grayling; A fish on almost every cast

When to Fish: August.

Where to Fish: Almost any rocky shoreline and river inlet in the Dease Arm.

Tip: Use Mepps in-line spinners on lightweight gear from shore, or flies in the rivers

Why We Chose It: Lake trout; A good chance of a fish of a lifetime, thanks to the guides at Plummer’s Great Bear Lake Lodge

When to Fish: Early August is best.

Where to Fish: Hit reefs in the Dease Arm for the biggest fish.

Tip: Though many favour trolling T-60 FlatFish, I recommend pulling the largest barbless, single-hook Eppinger spoons you can find.

Why We Chose It: Pike; Good numbers of ferocious fish

When to Fish: Any time after ice-out.

Where to Fish: Fish the weedlines in stained backwater bays of the Dease Arm.

Tip: Sight-fish with a variety of spoons on baitcasting gear.

When to Fish: The first three weeks of July are prime.

Where to Fish: Work rock shoals and points in 10 to 20 feet of water.

Why We Chose It: In 2008, Arctic grayling; Great numbers of big fish, and the famous Plummer’s Trophy Lodge

When to Fish: July and August.

Where to Fish: Focus on any river, rivermouth or shallow rocky point or shoreline.

Tip: Cast small spinners on ultralight equipment, jig a 1/8-ounce jig tipped with a white or pumpkinseed grub, or use dry flies.

Why We Chose It: Lake trout; Home of the world record, and great accommodations

When to Fish: July and August.

Where to Fish: Mid-lake humps.