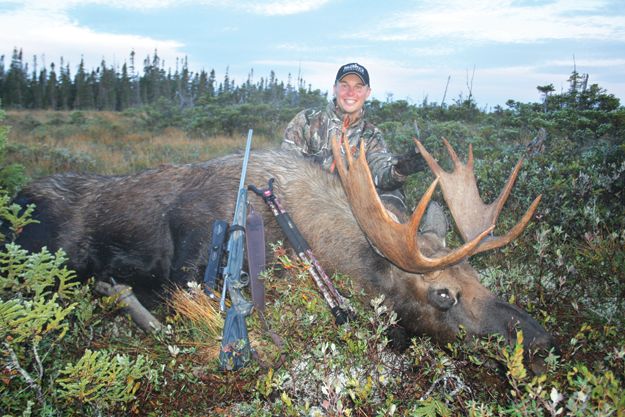 Heading Afield with TV’s Canada in the Rough

Dreams of remote locations void of other hunters yet crawling with games seem to be on every hunter’s mind. While it’s not easy to find such places, they do exist. One such area immediately came to mind when our friends at the Fish’n Canada Show, who normally write in this space, asked us to supply this issue’s “Destination.” The location? A remote Newfoundland peninsula where Island Safaris stages moose-hunting adventures. In particular, one crisp mid-September day stands out from our time in the Newfoundland wilds. The morning began with a cow and a calf rushing past our set-up. We waited patiently for a bull to follow their trail, but when one failed to show up, we made our way across a large bog into a wet, dense area that looked very “moosey.”

We started with some cow calls, then mixed in a few bull grunts. After 45 minutes, a deep, single grunt replied from the distant thick timber straight ahead of us. As our hearts raced, another grunt came from close by to our right. Then a third bull straight behind us started grunting. We were surrounded!

We continued calling, and while the fi rst bull went silent, the other two kept grunting. Minutes passed, and we wondered which one would come in first. Suddenly, the first bull started grunting again—and he was quickly getting closer and closer. When he was less than 100 yards away, and still out of sight, we could hear him stop and thrash a tree with his antlers. That sparked grunts from yet another bull, this time behind us to our left. Four bulls answering our calls from every direction was almost too good to be true.

The first bull finally committed to closing the distance and walked in, grunting with every step. At 90 yards, he walked out of the thick timber and into an open clearing, where Kevin anchored him. He was a very mature bull, with a huge body and 40-inch rack. So ended our moose-hunting adventure of a lifetime, complete with beautiful scenery and great moose populations—all to ourselves.