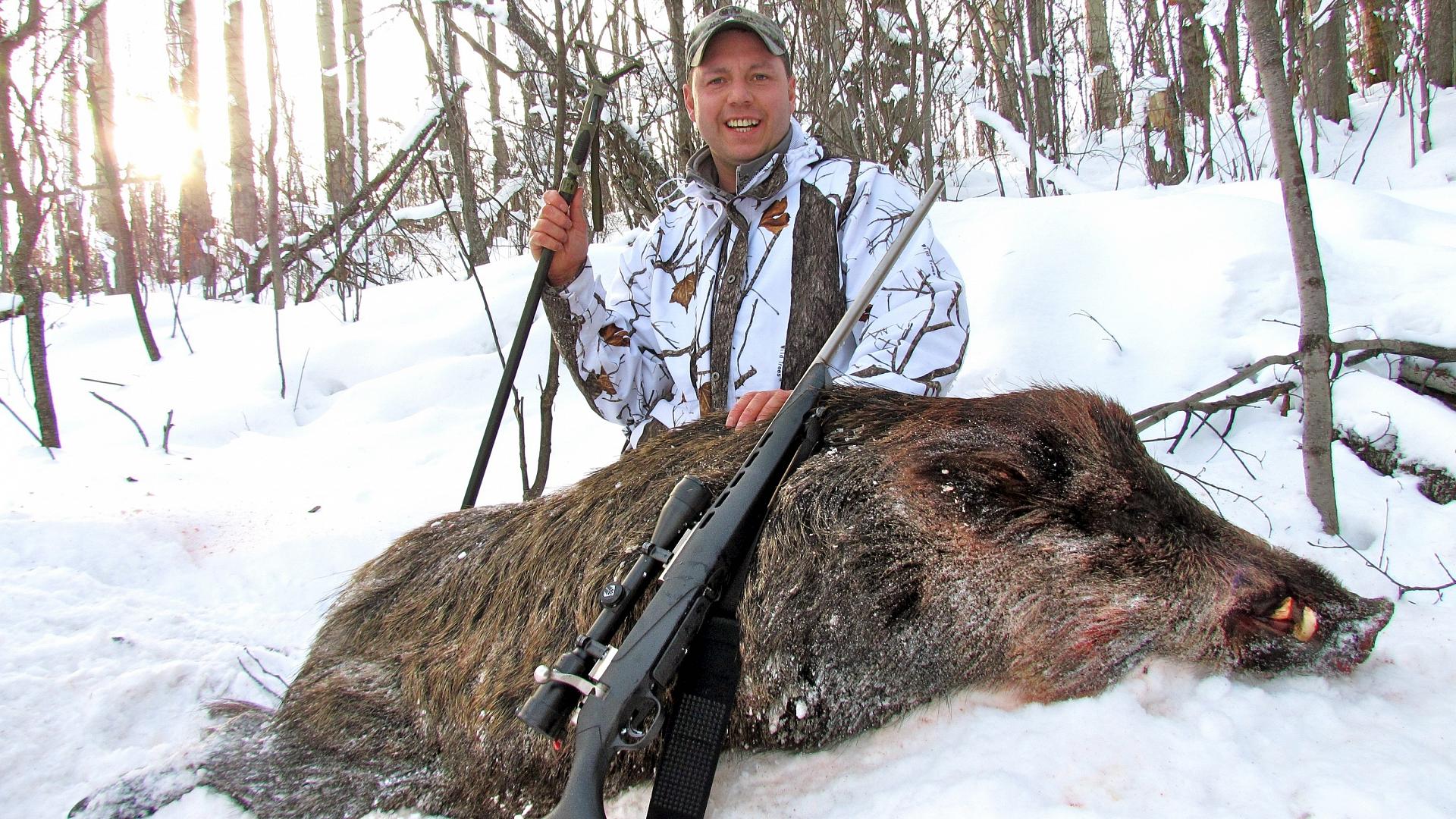 Crawling on all fours through the nastiest tangled scrub you could imagine, I quietly wove my bow through the branches. Just moments earlier, I’d spotted a massive Hungarian razorback boar meandering through the timber. Thinking it might follow a nearby game trail, I set up to intercept him.

No sooner had I eased into an opening and nocked an arrow than I heard a twig snap. In the dark shadows ahead, I glimpsed gleaming tusks and brownish-grey hair. As the giant boar scurried toward me, I drew and waited. Seconds passed and by the time he knew I was there, we were eye to eye at just 12 metres.

I’d heard stories about the thick plate covering the razorback’s vitals, so I wasn’t comfortable with taking a head-on chest shot. Then it happened: the boar spun and I released. Hitting behind the ribcage and angling forward, my arrow penetrated deep into the animal’s vitals. With a shrill squeal, he bolted for cover. Ten minutes later, I took up the sparse blood trail to discover my trophy boar lying motionless just 50 metres away.

First introduced in Alberta, Saskatchewan and Manitoba as exotic livestock in the early 1990s, wild hogs have not only adapted well to the prairie climate, but many have also escaped captivity and bred at an alarming rate (see “Hog history”). As a result, most landowners and wildlife managers now regard these prairie pigs as an invasive nuisance. For hunters looking to put a little pork on their fork, however, wild boars make for an exceptional free-range sporting opportunity—all year long.

*Laws and regulations for hunting free-range wild boars vary from jurisdiction to jurisdiction, so check with your local wildlife office before heading out. For an overview, also see www.wildboarcanada.ca.

Wild boars are commonly found on fringe farmland, often in proximity to captive populations. Keep an eye out for sign—if hogs inhabit the area, you’ll know it. Highly destructive, these animals literally tear up their surroundings, uprooting trees, shrubs and grasses. In agricultural areas, crop depredation is an ongoing problem.

Highly adaptable, wild pigs can call just about any lowland habitat home, as long as there’s dense vegetation and water nearby. They’ll even inhabit some upland environments. Biologists and game managers confirm that moist or wet areas near streams, rivers or other similar habitats best support these animals. Also look for thick foliage, which wild hogs use for cover.

Although they can and do travel, feral pigs will stick around if there’s a readily available food source—and if there’s no hunting pressure. These are opportunistic omnivores, and their diet tends to shift with the seasons. In the spring, they focus mostly on new growth: grasses, forbs, roots and tubers. As the months progress through summer and fall, they shift to the likes of mushrooms, carrion, eggs and insects. They’ll also eat crops such as wheat, barley, oats and corn, where available. Savvy hunters target the most accessible food sources in areas known to hold significant numbers of wild hogs.

With plenty of these pesky pigs out there, hunters need only do a little research to find them. Make a few phone calls to local fish and game authorities, or search online, and in short order you’ll find good places to begin scouting. While many escaped pigs have been known to travel great distances and take up residence in the most unsuspecting places, farmland within a 10-kilometre radius of any captive populations is usually a good place to start.

Wild hogs can have a small or large home range—some will stay within a condensed area as small as a half square kilometre, while others may roam throughout as much as 15 square kilometres. Determine where they are hanging out, secure landowner permission to hunt and you’re well on your way to putting one on the ground.

Wild hogs are lazy, generally moving only when they’re thirsty or hungry. They’re also predominantly nocturnal. Much like white-tailed deer, the sows and young will often come out into open areas first or stay in the fields last, with the boars typically exposing themselves as daylight fades or returning to the woods at sun up. More cautious, trophy-sized boars are not as easily duped.

Even still, wild hogs can sometimes be active throughout the day, depending on the time of year and availability of food. Extreme heat can push them to travel to water during daylight hours (below), while extreme cold can prompt them to visit their feeding areas more during the day.

Set out bait piles along their well-travelled paths and you’ve got yourself a good ambush location for a treestand or ground blind. Likewise, setting up near heavily used trail intersections to and from bedding and feeding areas, or in locations with plenty of rootings and wallows, can also be dynamite. Many hunters also have great success focusing directly on feeding areas.

If you prefer still-hunting, or the spot-and-stalk approach, you can similarly hunt along or near established trails in the hopes of spotting a boar, then moving in for a shot. Most spot-and-stalk opportunities are incidental, but where topography or cover allows, glassing from a high point or across open feeding fields can also produce sightings and shot opportunities. By confirming bedding areas, pinpointing travel routes and locating a primary food source, hunters can increase their odds.

Similar rules to most big-game hunting also apply—indeed, many hogs are taken incidentally by deer, moose or elk hunters sitting in their stands. Wild boars have an acute sense of smell, so regardless of your preferred hunting method, it’s imperative to remain scent-free. Also keep in mind that while it may have poor eyesight, the hog’s hearing is good.

Discharge a rifle and miss, and you probably won’t see hogs in the area for several weeks. For that reason, using a bow instead is ideal. If you opt for a firearm, however, don’t be shy when it comes to calibre and bullet size.

Almost any deer-hunting rifle in .243 Win. Mag. on up to .270, 7mm and most .30 calibres loaded with controlled expansion bullets will do the trick. Any hard-hitting .50-calibre muzzleloader will also work nicely. In the end, you’re looking for knockdown power, penetration and mass retention when choosing a suitable load for wild hogs.

As for the kill itself, aiming point is critical. The wild boar’s thick hide and dense layer of fat can create a tougher barrier for bullet or broadhead penetration, particularly around the shoulder and vitals. Like any animal, however, hogs expire quickly if the shot is well placed. In my opinion, a quartering away shot is best. The key is to place your bullet or arrow so that it penetrates the hog just in front of the hindquarters, travelling forward into the chest cavity to maximize damage to the vitals

If you’re looking for a fine-eating hog, consider taking a dry sow or smaller boar weighing between 85 and 165 pounds. Larger boars are arguably more challenging to hunt and more impressive, but their generally tougher meat offers lower-quality table fare.

Less concerned about taste and more focused on trophy quality? In that case, many wild-hog aficionados look for two things: body weight and tusk size. As a rule, a boar weighing 275 pounds or more is considered a trophy, as are hogs with a tusk length of two inches or longer (that includes both the bottom cutters and upper-jaw whetters).

Whether you’re after tasty chops or bragging rights, one thing’s for certain when you hunt for these foreign invaders—you’re doing landowners and wildlife managers a favour in the process.

Edmonton contributor Kevin Wilson has hunted wild boars with both rifles and bows.

Wild boars are native to the forests of Europe, northwest Africa and Asia. Historically, hunters have enjoyed pursuing them for sport, as well as for the culinary benefits they avail. The only wild pig indigenous to North America is the javelina, or collared peccary; historical records suggest it migrated north from South America. All other species were introduced.

Many of today’s feral hogs, particularly in the southern U.S., are a mixed breed of domestic pigs gone wild, along with a variety of interbred foreign species. In western Canada, most wild-pig hunting opportunities are attributed to the introduction of Russian and Hungarian razorback stock into penned hunting grounds in the early 1990s.

Highly adaptable to the prairie climate, wild boars are believed to have some of the highest reproductive rates of all large mammals, generally delivering two litters of six or more piglets a year. It was only a matter of time before a percentage of these captive hogs escaped, reproduced and evolved into well-established populations of free-range feral swine.