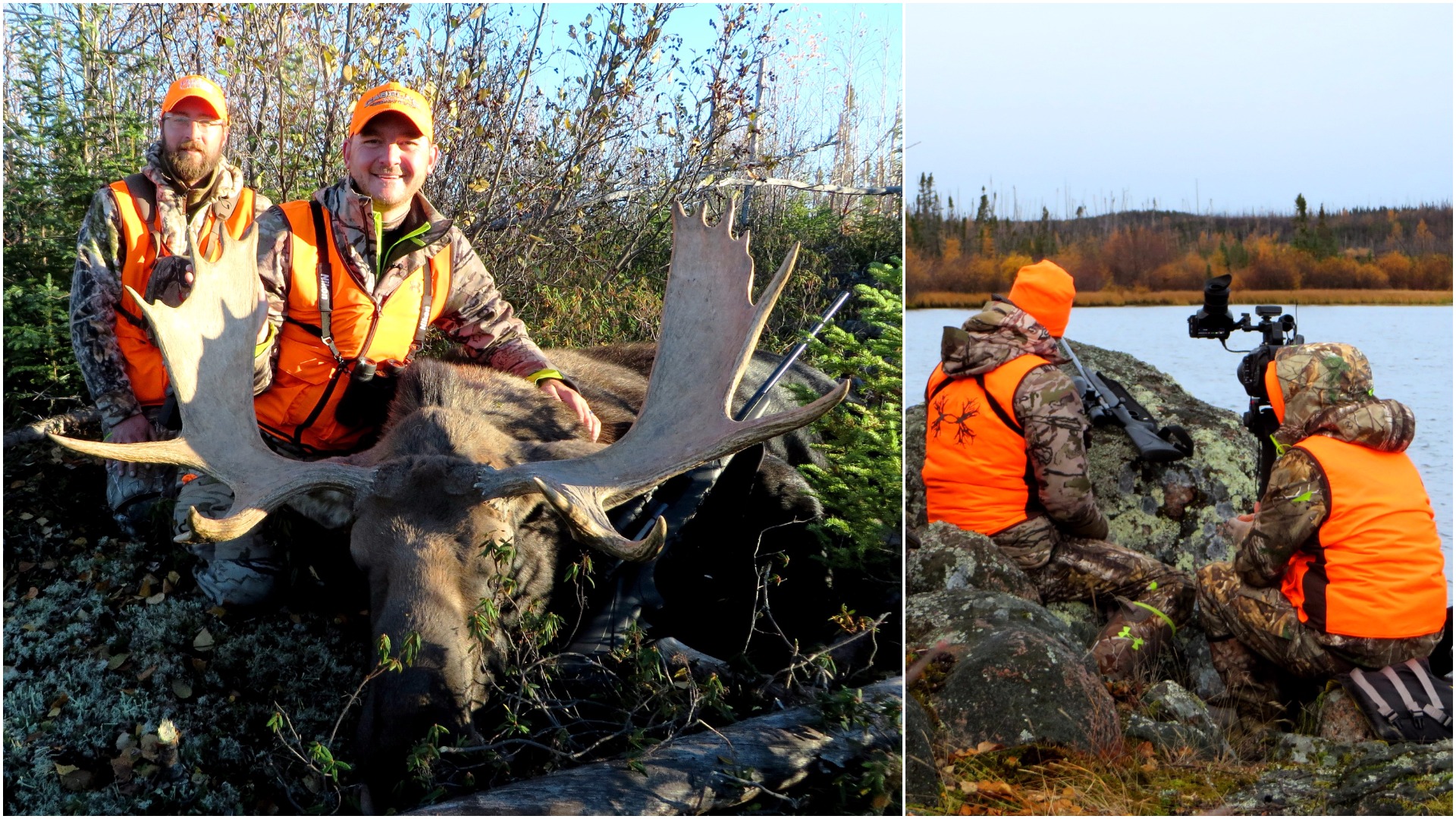 When you’re filming a hunting TV show in the remote northern wilds of Manitoba, failure is not an option

Flying over the vast wilderness of northeastern Manitoba is a humbling enough experience. Now imagine guiding hunters on the ground, traversing the remote terrain in search of barren-ground caribou and Canada moose. Humbling indeed, especially when the pressure is on to produce, as I’ve learned from guiding hunters across some of Manitoba’s most unspoiled regions for renowned outfitter Webber’s Lodges.

That was certainly the case last September, when a good friend of mine, Taylor Wright, booked a two-week caribou and moose combo hunt with Webber’s. Wright is the host of the hunting TV series The Canadian Tradition, and the plan was that I would guide him and his cameraman, gathering footage for one episode on caribou and one on moose.

Man plans and God laughs, however, and our first week spent caribou hunting was unsuccessful. With that, we turned our attention to moose and boarded a series of float planes to reach a remote cabin on a small lake in prime moose country west of Churchill. Neither of us had ever been to this particular lake before, where we had seven days to salvage our two-week-long trip and film at least one great episode for the upcoming season of Wright’s show. We are both competent enough moose hunters and ready to work hard for success, but we knew the outcome would be at the mercy of the weather.

En route, we devised our hunting strategy for the week ahead to make the best use of our time. Step one on the first day was to scout the entire lake by boat and on foot, establishing routes, identifying concentrations of moose sign and locating some promising spots where we could focus our hunting efforts. Next, we would establish a twice-daily milk run and call at each of our best pre-scouted spots, all the while actively hunting and glassing between each location. And finally, we planned to adjust our strategy as needed according to changing weather and moose patterns, keep to the basics, stay positive and hunt intelligently—knowing that it could all come together in a matter of moments. If nothing else, it would be an adventure.

One likely spot we scouted was a marshy creek mouth that emptied into a secluded bay from a beaver pond a short distance through the trees. It looked perfect, and it was loaded with fresh moose sign. After reaching shore as quietly as we could, Wright gave out a few cow calls to help cover up any unnatural boat noises. A big bull answered instantly from within 75 yards. He had us pinned, but he was rut-crazed and upwind, so he wasn’t overly alarmed. Reluctant to fully expose himself, however, the bull worked around us, stopped calling and soon vanished. We decided to also silently slip away and return when the wind was different, then come at him from another angle. There was a trapper cabin nearby, so we dubbed this moose the “Trapper Bull.”

The next morning, we tried our luck again. This time, we decided to call from the boat, anchoring just offshore to minimize noise, scent and movement. The Trapper Bull was still in the area, and he again instantly answered the first call. We could hear him grunting and raking brush as he lumbered toward us, until suddenly he was perfectly exposed. We got some beautiful footage of him, but the wind had picked up and started rocking the boat. As a result, Wright did not feel comfortable making the shot, and I commend him on his ethical decision—especially considering the stakes were so high.

The next day, a severe storm hit the region. High winds, sideways rain, sleet and snow made hunting extremely difficult. The animals did not move much, calling became ineffective and the lake turned too violent and treacherous to travel across. Our only connection to the outside world was a satellite phone, and that day I called my mother back home. I asked her if she could check the weather for us and calculate an average between Churchill and Tadole Lake, where we were roughly located, for the next couple of days. The report was promising. A day later, the storm cleared, and we still had two full days to connect with a nice moose. After our failed caribou hunt, we needed to stay positive, hunt hard and not give up. It was the peak rut, and anything could happen.

We woke up to a cold, calm, clear morning—perfect moose-hunting weather. Our plan was to head back toward the Trapper Bull, having already had two close encounters with him. Third time’s the charm, we kept telling ourselves. The bay where he resided was the third spot on our milk run, and we chose not to be hasty as we worked our way there.

At our first spot several kilometres from camp, we figured we’d do some calling and give it about a half-hour. Not long after setting up, we watched a cow moose swim with an apparent sense of urgency from an island to the mainland, then disappear into the burn. We had the feeling a bull was chasing her, so we got back in the boat and headed to another island, effectively cutting distance in half to where we’d last seen the cow.

After setting up again, we let out a few intruder grunt calls and the cow reappeared, only this time she had a big bull in tow. After letting him step nicely into the camera frame, Wright picked his shot between two trees at approximately 250 yards, then took another for insurance, tumbling the bull. It was an incredible moment, and after reviewing the footage, there were high-fives all around—and a big sigh of relief on my part as the guide.

We waited about 20 minutes, then picked our way through the burn and up the ridge to find our downed moose. After filming the recovery for the show and shooting some photos, the work commenced to debone and pack all the meat down to the boat. By late afternoon, we made it back to camp, where we learned the two other hunters and their guides in camp had also taken bulls, as well as a bonus black bear. What a day! Their first moose was taken in the morning and the second—a real dandy—later that afternoon. When the peak rut breaks wide open in prime moose country, it truly does become a magical place.

The following day, once Wright’s bull was fully processed, we decided to try an afternoon of fishing. Lake trout, walleye and northern pike were all available, but most notable were the big pike said to congregate near the river confluence on the north end of the lake. I was keen to hook Wright into some of those big fish to further add to our adventure, as well as to get some fun, additional footage for the show.

Soon after arriving at the north end of the lake and dragging large spoons behind the boat, we began connecting with the pike. Weeding through some of the smaller fish at first, we refined our game and began picking up bigger ones. Before long, several northerns around the 40-inch mark had been caught, filmed, photographed and released to fight another day. It’s great when trophy fishing is also just a cast away, and Webber’s Lodges’ outpost camps are certainly strategically selected with just that in mind.

On the last day of the outfitting season, the other hunters flew out. Wright and his cameraman had negotiated to stay on, however, to shoot extra video to round out the show while we guides closed down and winterized the camp. I tend to always carry a Manitoba moose tag in my pocket in the off chance an opportunity presents itself, so once my chores were done, I had the last half of the final day to see if we could harvest a second mature bull on camera.

With limited time, we put our efforts into the closest milk-run spot—a quiet little back bay where the topography acted as a natural sound chamber. After just an hour of calling, a cow came into view on a burnt ridge. She kept looking behind her, and sure enough, we soon caught some glimpses of a handsome bull following not far behind. We were losing light, but with some strategic calling, we finally got the bull to expose himself broadside. The cameraman gave me the thumbs-up to shoot, and a moment later the bull folded up from a single high-shoulder shot.

I couldn’t believe our last-day fortune after only a few hours of hunting, harvesting another beautiful moose. We packed the bull out under a full moon and the northern lights, arriving back at camp well after midnight. The next morning, we flew out, and I was exhausted. But it was the best kind of exhausted. Our hunting strategy had paid off—we kept to the basics, stayed positive, hunted hard and hunted smart, returning home with hundreds of pounds of lean, organic meat. It was a classic example of just how fast things can change when pursuing big game. And by capturing it all on film, we get to relive the adventure—and share it with others.

Learn more about The Canadian Tradition at www.thecanadiantradition.com. The adventure described here aired in season seven.>