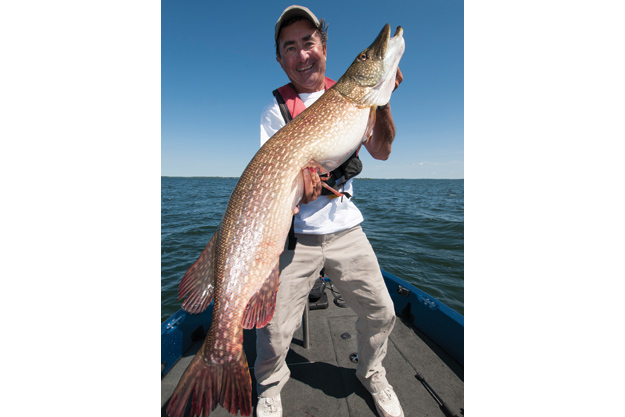 How to catch a trophy northern pike

When it comes to catching giant northern pike, early spring is traditionally the best time. That’s when they’re cruising the shallows, either preparing to spawn or feeding ravenously after reproducing. But it’s certainly not the only time to catch big pike. In fact, summer can be even better—if you’re fishing at the right depth, in the right spots and with the right gear.

Temperature: Find the layer of water that offers pike the optimal temperature they actively seek out and you’ll find the big toothy critters stacked up like sardines. That magic range? Look for 17˚C to 18˚C. In southern Canada, you might have to fish in water up to 25 feet deep, while in the far north you might only have to slide out into 12-foot depths at most. Regardless, when you’re fishing in the right water temperature, you’ve solved one-third of the riddle.

Habitat: Having found the optimal water temperature, you need to likewise find the ideal pike habitat. If deep weeds grow at the same depth as that key temperature range, as they typically do the farther north you go, it’s usually a slam dunk.

Late last August, for example, I ventured to Arctic Lodges on giant Reindeer Lake along the Saskatchewan-Manitoba border. My buddy Mark Stiffel and I had only one thing on our minds: to catch a gargantuan pike exceeding 30 pounds. Not only did we accomplish that goal, we also boated the resort’s biggest pike of the season. And it was no coincidence we had timed our trip for the hottest part of the summer.

After testing the shoreline shallows and catching scores of nice pike in the low- to mid teens, we abandoned the tepid, knee-deep water in favour of the outermost weedlines. There, the water temperatures had sucked in the giant fish and concentrated them in
wolf packs.

Imagine finding a patch of cabbage, smaller than your living room, at the mouth of a bay transitioning into the main body of water. In fewer than 15 casts, we landed seven giant pike with enormous heads and gargantuan bellies, each measuring between 46 and 49 inches in length. Every fish was the trophy of a lifetime.

In southern Canada, meanwhile, deep weeds and ideal summer water temperatures rarely overlap. That means anglers need to locate underwater points, rock reefs and isolated boulder piles that offer prime places for pike to ambush prey. Many anglers fail to associate pike with hard-bottomed structures, thinking the fish only haunt the weeds, but nothing could be further from the truth—I’ll often hook a monster pike while trolling over rocks for walleye, for example.

Still, the hottest lure during the trip to Reindeer, bar none, was a Williams C90 HN Whitefish spoon, with the treblehook replaced by a single Siwash dressed with a white, six-inch curly tail grub. We briskly weaved it over the tops of cabbage stalks, and the big pike—obviously mistaking the lure for a wayward ciscoe or whitefish—hit it so hard they almost yanked us out of the boat.

We flung the lures with seven-foot, heavy-action baitcasting rods and light-action muskie sticks teamed with Shimano Tranx reels that retrieve an amazing 43 inches of line with each turn of the handle. I spooled mine with 50-poundtest Sufix Performance braid, while Mark rigged his with 25-pound-test Maxima Ultragreen. As for the leaders between our main lines and lures, we both used foot-long, 80-pound fluorocarbon Stringease leaders. Put it all together this summer and you may never go back to fishing for pike in the spring.