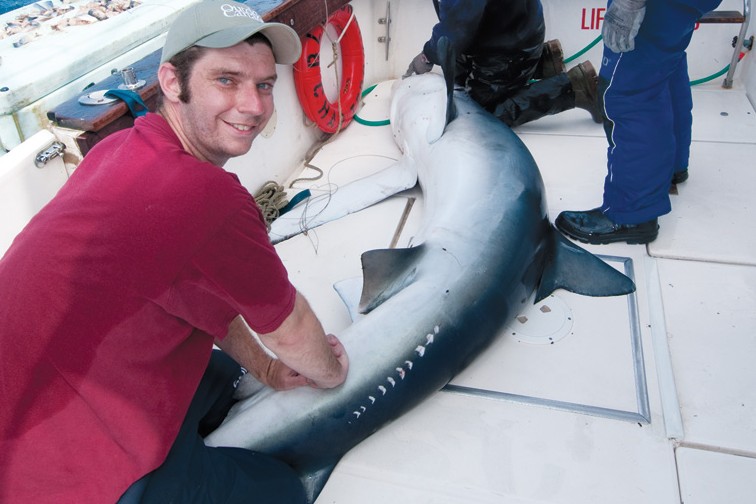 How to catch & release a shark

How’s this for sacrificing your body in the name of science? Last August, fishing editor Gord Pyzer and I spent two action-packed days on the Atlantic Ocean catching, tagging and releasing sharks—and learning about the inherent dangers in the process. Our mentor was Art Gaetan of Blue Shark Fishing Charters. For more than 15 years now, he’s been providing crucial data on blue, porbeagle, mako and even the odd great white shark for the Dartmouth, Nova Scotia-based Canadian Shark Research Laboratory. Thanks to Gaetan, I now know exactly what not to do when pursuing sharks on the high seas.

1. Place body parts in the water

I’ve seen images of sharks violently making quick work of skin and bone, but to see their raw power and striking speed up close is another thing entirely. Not long after Gaetan and his first mate, Zack Austin, set up and we start fishing on our first day, the action begins. An average-sized blue shark—a 100- to 150-pounder—silently cruises up to investigate the chum bucket dispersing partially frozen pieces of herring and squid. The shark starts circling the bucket, darting with stunning speed in and out of sight alongside the boat.

Gaetan grabs a spinning rod and reel he has rigged up and at the ready for such sharks that boldly approach the boat. He attaches a slab of herring to the 8/0 hook and drops it in the water. Within seconds, the shark appears, mouth agape, its razor-sharp teeth bared. With a head-thrashing motion as violent and quick as a Mike Tyson jab, it snatches the bait and disappears, peeling line from the reel in the process. Seeing the lightning-fast strike mere feet away makes it crystal clear that you definitely don’t want to get pulled overboard by a shark—or even dangle a foot or hand in the water, for that matter.

“I’m only going to ask you this once,” says Gaetan, shortly after I begin the fight with my first of several blue sharks. “Do you want the belt?” He’s referring to the fighting belt. It’s a simple device with a small, notched cup in the front that holds the rod butt. Given the ominous nature of the query, I figure I best take it. The fight starts with an impressively long run, and includes a great deal of what feels like ferocious head shaking. There’s also a lot of reel cranking to recover peeled line.

As it turns out, the fight is a relatively short one, lasting just 10 minutes or so. This only serves to give me a false sense of security regarding the fighting belt. Indeed, I pass up using it on a number of subsequent sharks, and it isn’t until the end of the day that I realize my mistake. That’s when I notice the series of painful loonie-sized bruises along my waistline where, in absence of the belt, I’d stuck the rod butt. The next day, there’s barely a place to stick the rod that isn’t already sore, so the belt becomes essential. Lesson learned.

3. Land sharks on their bellies

Fighting average-sized blue sharks isn’t any more difficult than you might imagine—it’s when you land them that things get hairy. That’s because Gaetan live releases all the sharks he catches, and he enlists his clients to help hold them down while he and Austin remove the hooks and put the research tags in place.

When a shark is first brought to the boat’s side, Gaetan plunges his arms into the water and wraps them around the shark just behind its head while Austin grabs the tail. They then hoist the fish onto the gunwale. Once it’s there, the shark is quickly rolled onto its side. Why? “Because a shark on its belly still has all its power,” explains Gaetan. It’s at this stage, as Gaetan and Austin work to remove the hook and insert the tag, that the client jumps in to hold down the tail. It sounds like an easy task, but it isn’t. You have to keep virtually all your body weight pushing down, and even at that the shark will still try to buck and flap its tail—further evidence of the unrelenting power of these awesome predators.

Halfway through day two, we hook into something that starts peeling off line like no other shark we’d caught so far. “Holy Hanna!” exclaims Pyzer, who’s still recovering from fighting a shark he’d just released. I’m posing for pictures with my latest catch, but I’m still feeling fresh so Pyzer passes me the rod once my fish is back in the water.

It quickly becomes evident this isn’t your average blue shark. The second line is pulled from the water, and Gaetan and Austin clear everything from the deck while Pyzer heads to the bridge to take pictures. In the heat of the moment, I forget the 15-minute rule.

The 15-minute rule? Namely, anglers are advised to pass the rod to a partner after 15 minutes so no one gets too tired. I’d scoffed at the idea when I first heard about it, but after 45 minutes with our latest catch I’m overheating and dripping with perspiration. When I hand the rod to Austin so he can take it around the bow as the shark circles the boat, I take the opportunity to remove my jacket and sweatshirt. Other than to avoid sweating profusely, I begin to realize a few other reasons for the time limit. For one, my arms, legs and back are starting to ache. Then there’s the fact my concentration seemed to be slipping, with Gaetan and Austin piping up with an increasing number of pointers I hadn’t previously needed. “Keep the rod straight!” “Lift up, reel down!” And rightly so: at this point, a slight mistake, such as getting the line snagged on one of the rod’s rollers by not keeping it straight, would be devastatingly costly.

After the beast rounds the boat a ninth time and is within a reel crank or two of a third landing attempt, I realize my 15 minutes have long ago expired. With the rod tip held high, I feel the muscles in my arms suddenly lock up. I can’t move them down for fear the rod will slip from my grasp, so I yell for Pyzer. With fresh arms, he grabs the rod and quickly gets the fish close enough for the third landing attempt—and one last serious brush with danger.

Sharks this big can’t be landed on the gunwale, so they have to be dragged onto the back deck through the door in the stern that leads to the swim platform. Gaetan grabs the leader and pulls the nine-foot five-inch blue shark head first onto the deck; he later estimates it to weigh 280 pounds.

The shark comes in with teeth bared, thrashing its head and snapping its jaws in all directions. Gaetan pounces on top and wraps his arms around it just behind the head, wrestling to get the beast on its side. Then Austin jumps on the tail and wraps both his arms and legs around it in an attempt to help control the fish. Even still, the shark manages to lift its tail and slam it back down on the deck. That’s when I jump in.

As Gaetan works at rolling the shark onto its side, I help Austin get the tail under control. Finally, we manage to get the shark on its side, and I straddle the tail as Austin hurries to the business end to help remove the hook, measure the fish and tag it. Then Pyzer, Gaetan, Austin and I all work together to push the monster back out through the stern door and into the ocean, where it quickly disappears.

I drop to one knee, exhausted but happy to have sacrificed my body in the name of science.

Aart Gaetan’s Blue Shark Fishing Charters runs out of Eastern Passage, Nova Scotia, about a half-hour drive from Halifax. Gaetan provides all the angling gear, but you’ll need to bring along layers of clothing, including a rainsuit, as well as food, drinks, sunglasses, sunscreen, a camera and something to help prevent seasickness (Gaetan recommends taking Gravol the night before your trip).