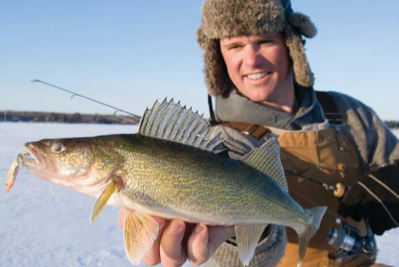 How to find and catch big walleye at first ice

Where to find them

Unhassled by anglers for several weeks by the time first ice arrives, the walleye have settled down, grown hungry and grouped up in large schools around easy-to-find locations. Simply start drilling holes in and around the same spots you left the fish on your last trip in the fall.

If you missed out on the late-fall walleye bonanza, don’t worry. On a contour map, pinpoint all the best-looking classic walleye structures on the lake or the portion of the lake you’re going to be fishing. Large, hard-bottomed, underwater points that jut out from the shoreline or islands are ideal. Ditto for large reefs, shoals, bars and humps. And don’t forget about the often overlooked saddles between islands or between an island and the mainland.

Think of these structural elements as basic three-star winter walleye hotels that quickly rise to four-star digs if you also find a large, 10- to 15-foot-deep feeding flat on top. Its primary attraction is that it hosts hordes of minnows, crayfish and aquatic bug life—the food that ultimately attracts and sustains the walleye.

Similarly, a four-star winter walleye structure can in turn become a five-star suite if it also sits adjacent to deep water. How deep is deep? The deepest water in the lake, or at least the deepest in the portion of the lake in which the structure sits. As a general rule, I like to find water very close by that’s at least 40 feet deep. Of course, there are exceptions.

In extremely large bodies of water such as Lake Ontario, Lake of the Woods and Lake Winnipeg, a sizeable portion of the walleye population spawns in the spring in one or more major river systems that flow into the lake. Where this occurs, walleye get a head start on the spring migration by moving toward the rivermouths in the fall, where they rest, stage, concentrate and feed over the winter. It’s the reason the ice fishing is so good in the Bay of Quinte, for example, and around the mouths of the Rainy, Red and Winnipeg Rivers.

Another exception to the winter walleye structure rule can be found in the myriad shallow to moderately deep, featureless, bowl-shaped lakes you find scattered across the country, especially in the Prairies. I cut my ice-fishing teeth as a kid on a central Ontario walleye lake like this, and I still look for such lakes because they’re so easy to pattern. Just look for the deepest pockets or holes in the lake—the fewer the better—and you’ll typically find the walleye crammed in like sardines.

Not that the deepest part of the lake needs to be overly deep. My all-time favourite structure-less, bowl-shaped, winter walleye wonderland has but a single pocket of water that is—are you ready for this?—a whopping 12 feet deep. With the rest of the lake averaging only half that depth, however, the 12-foot hole is a relative abyss. And I swear, every walleye in the lake hunkers down in it during the winter.

How to catch them

In effect, there are four categories of walleye lures: horizontal search baits, such as Rapala’s Jigging Rap and Jigging Shad Rap; flash lures, or spoons, including Williams’ Nipigon Spoon, Northland Tackle’s Buckshot and Blue Fox’s Tingler; lipless crankbaits, such as LiveTarget’s Golden Shiner/Gizzard Shad and Rapala’s Clackin’ Rap; and jigs, such as the ReelBait Flasher Jig.

Flash lures are what I rely on most at first ice on heavily structured waters because the walleye are unpressured and hungry—a hard combination not to like. As a result, you can call the fish over to your hole and trigger them to bite, even if you’re not perfectly positioned over the structural sweet spot.

Precisely because you can fish them in an up-and-flutter-down manner, flash baits enjoy top billing early in the season over the other lures, but only slightly. And just in case they don’t produce, I always have at least four ice rods rigged—one with each lure style—to let the fish decide what they want.

If flash baits tend to produce best early in the season, why wouldn’t a lipless crank work equally well? After all, they’re the flashiest and noisiest of the four lure types. I certainly use them first when I’m fishing a big, clear, featureless lake such as Lake Winnipeg, where they’ll attract walleye from great distances. But on heavily structured, Shield-type waters, where walleye are more concentrated around a specific feature, they sometimes flash, wobble and squeak too much.

As for jigs, I almost always employ a jig and live, dead or artificial bait presentation on a deadstick rod wherever regulations permit a second hole, which is most provinces.