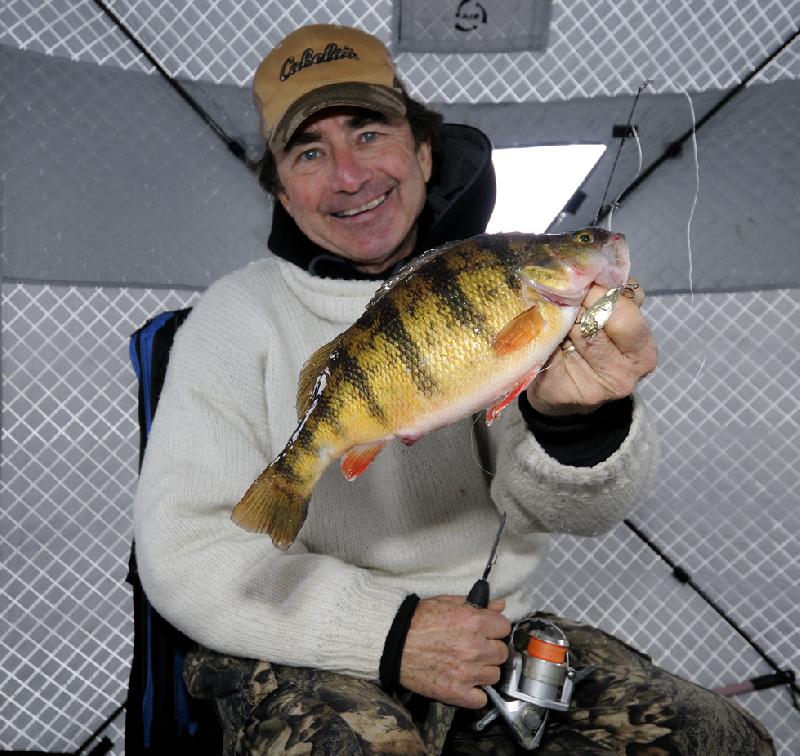 How to fine tune your sonar unit for ice fishing

What a way to say “goodbye” to an old year and welcome in a new one.

I spent New Year’s Eve down Lake of the Woods with my 12-year old grandson, Liam, and my, oh, my, did we spank the big, gorgeous, husky jumbo perch.

Honest truth, we found it harder to ice a yellow jacket under a foot in length than to catch one between 12 and 14 inches in size. In fact, several of the sumo perch were pushing an honest-to-goodness two pounds in weight. They were some of the biggest yellow perch I’ve seen anywhere,  especially in the North Country.

I posted a few of the images of our catch on my Facebook page and they sparked a ton of questions and comments—especially about how I fine-tune my sonar units to get the most from them in the winter. In fact, I received so many sonar questions that I’m guessing that Santa was a busy man this Christmas putting units under trees.

Matt, for example, mentioned that he had received a new Humminbird Ice 55 unit—the same model I use—and wanted to know if I could share some fine tuning shortcuts.

I replied that I find it essential to do two things: the first being always to use the zoom feature to zero in on the zone you’re fishing. Liam and I, for example, were catching the perch close to the bottom in 30 feet of water and several of the fish coughed up small crayfish they had just eaten—further proof they were snooping around the rocks.

When you zoom in on the specific zone that you’re fishing, your lure and the fish are so much easier to see and to monitor. I also find when I am ice fishing with kids, and folks who haven’t spent a lot of time on the ice, that it is so much more exciting when they see that big, wide, thick, red slash suddenly rise up to intercept their lure. They watch it come up and then feel thunk!

Something else I always do is turn the gain or power up high, then keep backing it off until I can easily see my lure.

Buddy Darrin Bohonis, who is the owner/sales representative at Bohonis Enterprises in Winnipeg and the most knowledgeable “sonar head” I know (especially with Humminbird models), also contributed several valuable tidbits to the discussion.

In fact, I found Darrin’s comments so insightful, that I thought I’d share them with you here, so you could maximize your sonar reading skills this winter. 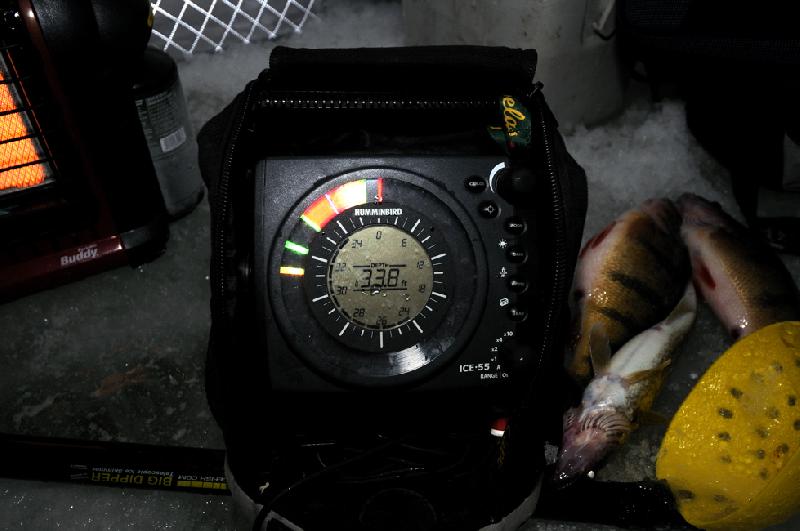 Notice the red fish slash above my green coloured lure.  The red indicates a bigger/stronger signal – either a jumbo perch or walleye –  hovering above my small bait.

“There are certain tradeoffs in having higher or lower Gain settings,” Darrin said, “but by adjusting the Gain setting off your lure, you are essentially establishing a “baseline.” Typically, you only require enough gain to see your bait and this level will vary depending on the depth you are fishing.

“By establishing this baseline around your bait, it is easier to distinguish the relative size and signal strength of targets as they pass through your transducer beam. You’ll actually be able to interpret the difference between passing baitfish and larger target species.

Darrin went on to say that once you establish a baseline from your lure, using the six colour display option, your lure will typically be in the blue spectrum, especially when you’re using smaller baits as Liam and I were doing for the perch. So, similar size baitfish will fall into the same colour reference.

In other words, if a fish rises up to your lure and it is shaded blue, you can be confident it is relatively small. But if it appears as a thick, bright, red slash, well, hold on to your rod.

“I’ve seen this many times when fishing Lake Winnipeg,” Darrin noted. “All of a sudden your screen is showered in blue flickers. That is a good indication that you’re in the right area with baitfish and that a school of “greenback” walleyes are soon to follow.

“When you do see larger targets, especially ones with red, you know you’re piquing the interest of something bigger. The larger the fish, the thicker the red in the signal return, especially as it is passing directly under the transducer beam where the signal is strongest. Having features like this, that let you customize the unit to suit your preferences, is what makes the Humminbird ICE 55 such a powerful ice fishing tool.”

Looking at the huge humpies that were laying on the ice inside of our ice shelter on New Year’s eve, I couldn’t agree more.