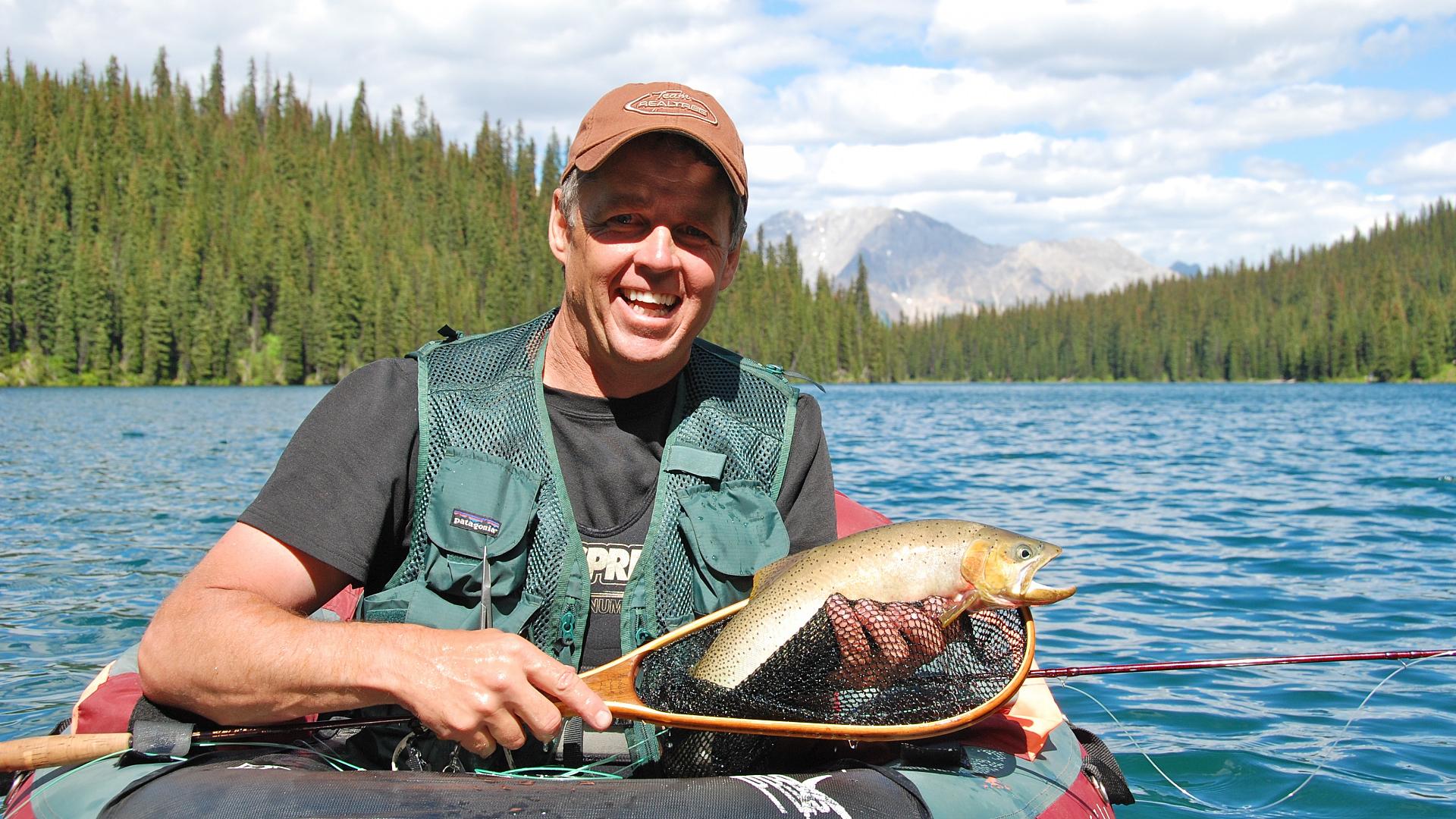 To tackle Canada’s true mountain fish, head to the high-country lakes and rivers of Alberta and B.C.

If there were ever a fish that epitomizes the Canadian Rockies, it’s the cutthroat trout. After all, the bull trout is really a char, and the much more precocious rainbow trout is an interloper in the western mountains, except in the Athabasca drainage. No, the cutthroat is the only true native trout of the high country.

If the cutthroat has one downfall, though, it’s that it’s a voracious feeder and therefore is easily fooled by a skilled angler with an artificial fly or lure. And in the presence of a worm, it becomes a downright idiot—no wonder bait isn’t permitted in the bulk of cutthroat waters.

Still, cutthroats are deserving of respect. They’re a dry-fly angler’s dream come true, and rare is the day you can’t coax them into slurping a large hopper or mayfly off the surface. I do 80 per cent of my fishing with a spinning or casting rod, but when it comes to cutties, I’m a fly-fishing purist. Whether you’re a novice or expert, the cutthroat is sure to please, and mountain lakes and rivers of Alberta and B.C. are the places to go.

Two species of cutthroat are recognized in Canada. Found along the West Coast, the Pacific variation is often anadromous, equally at home in both fresh and saltwater. The westslope cutthroat, meanwhile, is a lover of high elevations. It’s found throughout the B.C. Interior and along Alberta’s eastern slopes of the Rockies. Almost every small mountain stream or high-elevation lake is home to at least some westslope cutties.

Some pure-strain cutthroat have been preserved in high-mountain lakes and the highest reaches of mountain streams, but in the lower reaches, their genetics are typically diluted with rainbow trout lineage. Alberta’s stocks of native cutthroat are now found in just one lake in Kananaskis Country—Picklejar—although stockings of B.C. fish have once again expanded the species’ range in the province.

One of my guilty pleasures each summer is to take to the high country west of Calgary and explore new lakes. Most are filled with eager cutthroat and you’ll rarely have to share the water with more than a handful of other anglers. A few years ago, for example, my partner, Vanessa, and I decided to head to Kananaskis Country on an August long weekend.

Anyone who’s visited this part of Alberta on a long weekend knows the campgrounds will be crammed with weekend warriors, and that the hiking trails practically need traffic controllers. But as is typical with the high country, the number of people thins out in equal proportion to the number of kilometres you hike from the trailhead.

On this trip, we ventured to a lake I’d last visited 20 years earlier. With so much of the backcountry being developed, I was happily surprised to find it in relatively the same untouched state. While the trail was slightly more discernible, there was virtually no sign that humans had recently been there—remarkable, considering we started on a trailhead only an hour west of a city of one million people. You usually have to fly in to find this kind of solitude, but we’d only hiked a measly five hours. That’s one of the big draws about fishing for cutthroat. 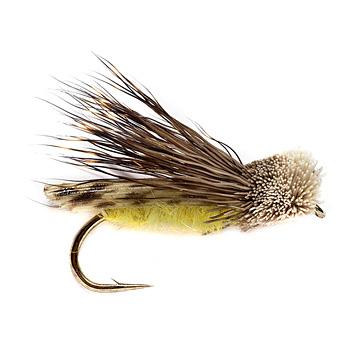 If the cutthroat are rising, catching them is as easy as matching the hatch. In these high-mountain lakes, in fact, you don’t even need to have an exact match. Summer is short here and insect activity on the surface is rare, so when it happens, the cutthroat are eager to feed. Bring along a selection of Adams, Black Gnats and Letort Hoppers (above) in sizes #16 to #2, and there isn’t a hatch you can’t match closely enough to fool trout that are actively feeding.

Even when the fish aren’t rising, it’s still often quite easy to get them to the surface. In this case, bigger is typically better, so I like to use hopper patterns in the #6 to #2 size range. Hoppers are a natural food source in August and September in the mountains, and it’s not uncommon to also have small numbers of huge caddisflies, such as giant sedges. Most often, these are food sources of chance, so even when a hatch isn’t happening, cutthroat remain vigilant, watching for any tasty morsel that lands on the water.

What I’m about to tell you next is proof positive I’m not a fly-fishing snob: Rather than delicately presenting these big flies, I like to land them fairly hard on the water, and rather than letting them sit motionless, I often retrieve them across the surface at a fairly brisk pace. The fly needs to be well greased to remain buoyant, but this unorthodox method rarely lets me down.

Vanessa and I often fish a favourite lake that’s only an hour’s hike from the trailhead. It sees a lot of pressure from shoreline anglers, so we typically take our float tubes (above) up to get out in the middle of the lake to avoid the crowds. While I doubt many self-respecting fly anglers would admit to doing this, we often slowly move along in our tubes, dragging our flies across the surface. Even when no one else is catching fish, this method elicits some savage strikes. On more than one occasion, I’ve had fish snap the leader from taking the fly so hard.

The only time I find this method doesn’t work too well is when there’s a slight chop on the water and visibility is compromised. In that situation, I’ll use the same dry flies, but I won’t grease them; that way, they’ll run just under the surface. You almost never have to pull a wet fly out of the box for high-mountain cutties in lakes.

While mountain lakes are my passion, I’ve also done my share of fishing for cutthroat in flowing water, from tiny headwater streams to large, fast-flowing rivers. One of my most memorable outings was on a remote stretch of Alberta’s Ram River, arguably the best cutthroat river in North America, choppering in with my buddy Ken Bailey, Outdoor Canada’s hunting editor.

While I was holding my own pretty well with Ken when the insect activity was abundant, he proceeded to school me in the fine art of catching cutthroat once the surface turned calm. At the time, we’d gone quite a while without enticing any rising trout, and even on nymphs things were fairly slow. So Ken headed down to a stretch that had been productive earlier in the day and told me to watch and learn.

I honestly can’t remember what fly he tied on, and it likely doesn’t matter, but for about the next 15 minutes, he cast upstream and allowed the fly to drift naturally downstream without a rise. He never changed flies or changed his drift. I was chuckling—until the first fish rose. Then on the next dozen or so drifts, Ken picked up a big fat cutthroat nearly every time. He just smiled and said, “Sometimes you simply need to convince them something is hatching.” 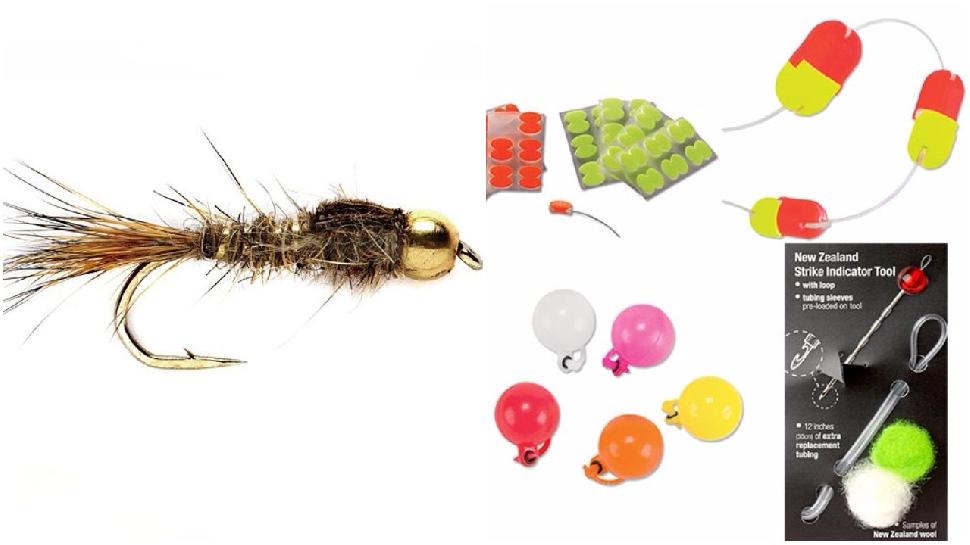 While I hardly ever use wet flies on lakes, they definitely have their place on streams and rivers. One of my favourite things to do on a tiny stream is to tie on a dark-coloured nymph, such as a Hare’s Ear (above left), two to three feet below a strike indicator (above right). I then work areas below small cascades or other features that cause major disturbance on the surface of the water.

Some of the streams we fish are so small that you don’t even need to cast. You quite simply dangle your set-up below the rod tip in the turbid water and watch for any hesitation in the strike indicator as it moves downstream. I was shown this method by a member of the Canadian Fly Fishing Team on Ontario’s Grand River while fishing for browns; it’s equally productive in the West’s high-mountain streams. The fish are typically small in these tiny creeks, but this intimate style of fishing more than makes up for it.

It’s definitely not the challenge of catching a cutthroat that draws me to the high country—it’s where you find these true fish of the mountains that’s the allure. You don’t earn a cutthroat because of superior angling skills. You earn a cutthroat by getting to where it lives.