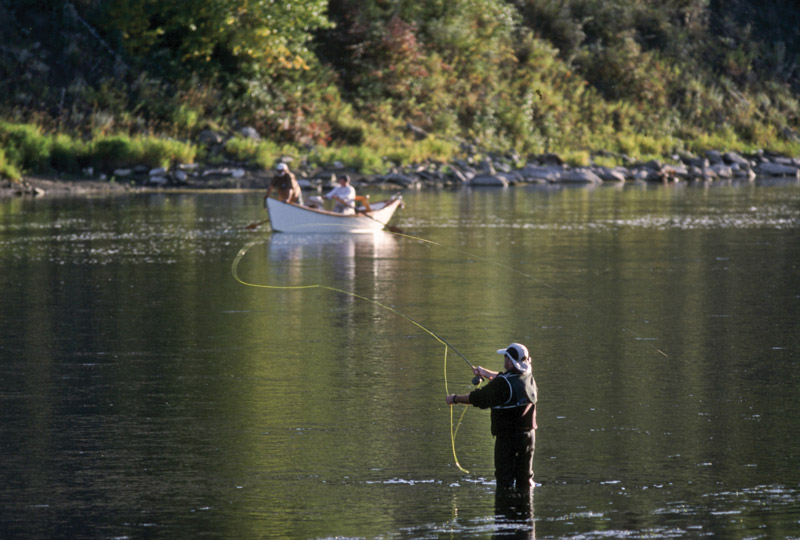 How to get your flies down deep

These lines get your flies down deep—and keep them there

Every year seems to bring forth a bewildering new crop of fly lines to choose from. While floating lines remain the most versatile—and therefore the most widely used—there are times when a full-sinking or sinking-tip line is essential. It’s with these lines that the greatest technological advances have been made, but all the different capabilities make it that much more confusing when it comes to picking just the right one for your needs.

First, you have to understand what sinking lines are used for. Obviously, you must use a floating line for dry flies, but sometimes a full-sinking or sinking-tip line is a better tool when fishing nymphs or streamers.

While it’s a common belief that these lines take your fly down deep faster, they don’t. The quickest trip to the bottom comes from fishing a heavy, sparsely dressed fly attached to a long leader and a floating line. But as soon as you start your retrieve, the fly rises to the surface, drawn up by the end of the floating fly line. That’s where a full-sinking or sinking-tip line comes in: it keeps the fly deep throughout the retrieve, because the end of the fly line remains beneath the surface.

So, what’s the difference between the two lines? In a nutshell, a full-sinking line is uniformly denser than water and sinks throughout its entire length, while a sinking-tip line is actually a floating line with a front end that sinks. Here are the basics you need to know about each.

Since they keep the fly at nearly the same depth throughout a long retrieve, full-sinking lines are favoured by lake fishermen. These lines are available in a variety of densities—called sink rates or classes—which are usually identified with a Roman numeral. Type I or Class I, for example, is a slow-sinking line, while Type VI, the densest line, sinks much faster. Which one you choose depends entirely on how deep you want to fish. If you’re going to spend a lot of time fishing lakes at a variety of depths, you might even need several full-sinking lines of different densities.

Full-sinking lines are a good choice on lakes and ponds, but they’re not as useful in moving water. The reason is simple: you can’t mend a line that’s underwater. Enter the sinking-tip line. Since only the front end of the line sinks—keeping your fly down—you can still mend the back floating section to control the drift. This is crucial when fishing in current, and that’s why hard-core river anglers almost always choose a sinking-tip, especially for presenting streamers.

Sinking-tip lines have their own complexities, with several important variables to consider. The first is the length of the sinking portion. Sinking-tips can be as short as three feet or as long as 30. Once again, your choice depends on the water depth. The longer the sinking portion, the deeper you can fish.

The second variable is the density of the sinking portion, which determines how fast it sinks. Sinking-tips are available in the same classes as full-sinking lines, but for most moving-water situations, a faster sink rate is best. That’s because as the tip sinks, it’s also drifting with the current, meaning your fly has limited time to get down.

Remember, if you don’t get your fly down to where the fish are, you’re only practising your cast.

One option for budget-conscious anglers is an “instant sink-tip.” This is a length of sinking line, typically six to 10 feet, that simply loops to a standard floating line. It’s a good option if you only occasionally need a sinking-tip. It will cast reasonably well and handily submerge your fly. Perhaps best of all, you won’t need to buy an entire sinking-tip line, not to mention an extra spool or complete reel to accommodate it.