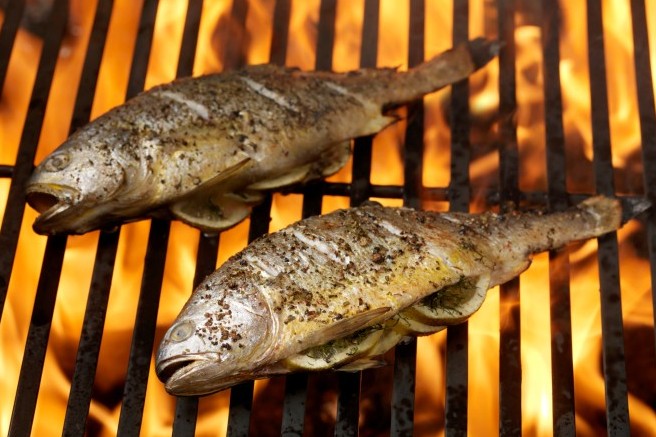 How to grill fish whole

Nothing says summer like throwing an entire fish on the barby; especially if you caught it yourself. It’s arguably the best tasting way to cook a fish and it’s one of the easiest way to cook it. Here’s how to take all the guesswork out of it.

Cut a few diagonal slashes on each side of the fish and place on the grill grate for anywhere from 5-15 minutes per side depending on its size and thickness. A fish that’s stuffed with vegetables or grains will generally take long than plain fish.

Put some salt and pepper on the fish as well as a bit of salt inside the cavity. Then stuff the cavity with whatever your recipe calls for: sliced lemons, limes or oranges, thinly sliced fennel, fresh herbs, chilis—just about anything you want can go in there.

Now coat the fish with a tablespoon of olive oil—this will prevent the fish from sticking to the grill. It’s equally important to make sure the grill is clean and to brush some oil on it as well.

When the skin is crisp and brown, poke the thickest part of the fish with a small knife. When the knife goes in without any resistance, use a spatula (brushed with oil on both sides) to gently flip it. Grill for another 5-15 minutes until the meat on the second side is just opaque and cooked to the bone.